Linking back to the review that started the discussion:

Pretty damning review that ends with: A lightly played, lightly sung, lightly recorded Missa Solemnis: if that’s what one wants in a Missa Solemnis, here it is. [image]

Interesting. That was Gramophone Magazine Record of the Year 1991.

It also made it into the Gramophone Magazine greatest 100 recordings of all time.

The reviewers seem to prefer this version: 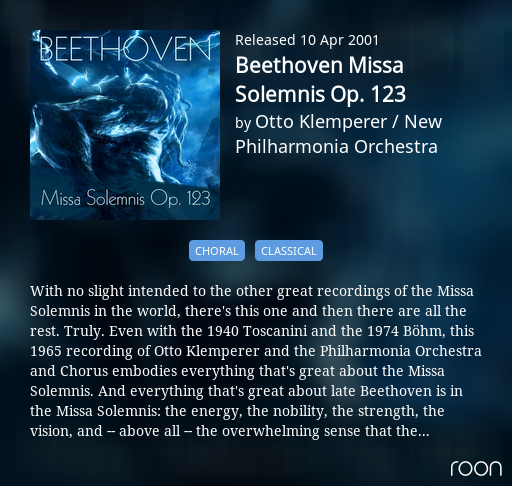 After listening to them both, the Klemperer is much more to my taste than the Gardiner, but who’s to say the Gramaphone listeners (or Editors ?) are wrong ? Well we are, I suppose. With both on Tidal, each of us can make our own choice. 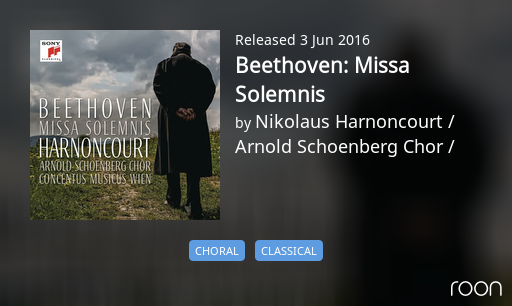 It’s always best to make your own mind up about these things which is of course the point of this thread. But James Leonard wrote both the Gardiner and Klemperer reviews. An interesting biography. He does seem to have a thing about classic recordings from his formative years in the 60’s.

There is a more recent live recording by Gardiner where a different reviewer on allmusic both acknowledges the “high point” of the original studio recording and the strengths of the new recording.

I haven’t got this newer version and personally I am ambivalent on period instruments. Some people find the semitone lower tuning of period instruments disconcerting (maybe Leonard did). Sometimes it works and sometimes it doesn’t. If you listen to the Gardiner and Klemperer side by side it is quite noticeable. The Gardiner A was probably tuned to 415hz whereas the Klemperer A was probably tuned to 440hz 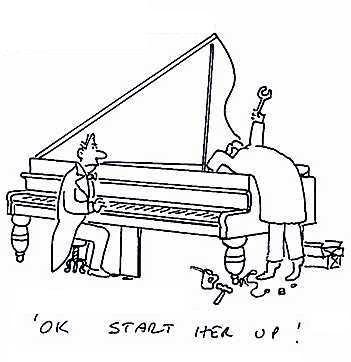 The Story of "A:" More about Baroque pitch

Since the title of our blog is A-415, we felt that one of our first blog posts of the new year should again address the issue of pitch, esp...

Personally I find both interpretations magnificent in their own ways. I really like the much more precise counterpoint of the Gardiner that Leonard objects to. Compare the Glorias for example. No doubt this was made possible by a combination of smaller forces, period instruments and the lower Baroque tuning. On the other hand the Klemperer is much grander but there you go.

Very interesting Tony. I agree the Gardiner does sound a semitone down. I saw a suggestion here that 430 Hz was used in the Classical period so 415 Hz might be anachronistically old fashioned for Beethoven.

Both the Klemperer and Gardiner are getting on now. The Klemperer is more than 50 years old and the Gardiner more than 25 years old. Much newer interpretations exist for both modern and period instrument styles. I am away from home so I cannot compare on my normal system. For example there is a very highly rated 2018 period version from Massaki Suzuki by the same reviewer that likes the Gardiner (Blair Sanderson)

On modern instruments I like the Klemperer but I often prefer Böhm from this recording period and its the same with his Missa solemnis. I like his 1974 version (no allmusic review). He is generally just a tad “cooler” than his contemporaries with everything he does but he always seems to get the pacing and counterpoint just right and that always appeals to me. Leonard also reviews the 1955 Böhm but ultimately dams both it and the 1974 version with faint praise.

Find album reviews, stream songs, credits and award information for Beethoven: Missa Solemnis - Berlin Philharmonic Orchestra, Karl Böhm on AllMusic - In 1955 and at the peak of his postwar powers,…

Sanderson on the other hand singles out the 2017 Pentatone for a recent recording on modern instruments. Sanderson’s reviews seem to be much more even handed than Leonard’s. I cannot wait to get home to check out both his modern and period instrument recommendations of recent recordings.

Thanks for that. I can see I have some more listening to do, which is fine. I’ve only just started to enjoy the whole of the MS, having gotten into it via the Benedictus.

Of the versions on Tidal I’ve been listening to this Solti. A bit ponderous in places but I liked the singing and the acoustics: 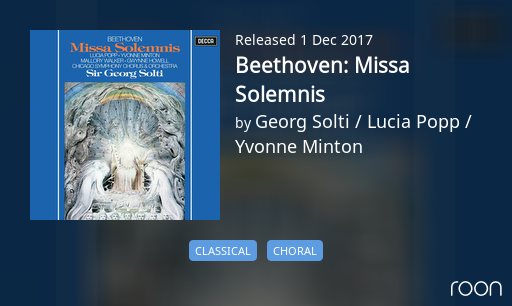 Yes. The whole discussion has made me re-visit as well. The Gardiner was a landmark recording in it’s day when the period style was much more novel.

But I think at the end of the day I usually prefer modern instruments. I notice that more recent recordings are often taking lessons from the period instrument movement. Drier recordings with much better equipment where it is easier to pick out the counterpoint in complex works. Maybe it is possible to have the best of both worlds.

I think this is the 74 Bohm on Tidal: 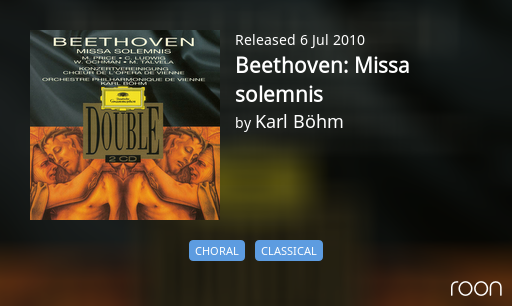 It would help to have at least a date of the original recording but that’s Classical metadata for you; the Good, the Bad and the Entirely Lacking.

Yep. That’s the one. Its the 1974 Vienna Philharmoniker rather than the earlier 1955 Berlin Philhamonic.

Blair Sanderson hits the nail on the head again for me with his review of this live Haitnik version from 2015. 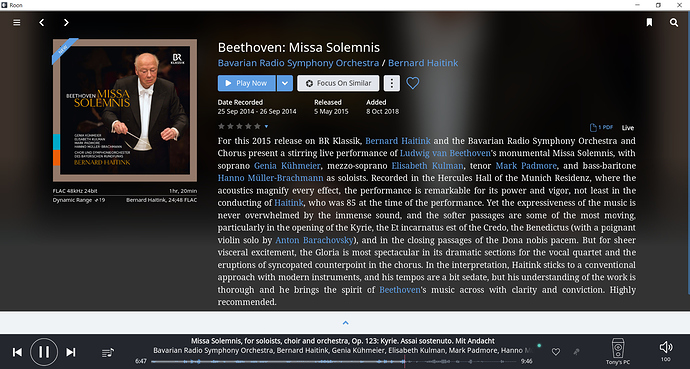 It is live but the coughs and shuffling in the quieter passages is never intrusive. On the other hand it’s an absolutely electrifying live performance in a peerless acoustic. Real edge of the seat stuff. You can pick out everything, even the most complex counterpoint.

If you like your Beethoven done the old fashioned way on modern instruments at 440hz like Klemperer and Böhm, but you want the lower noise levels of a modern recording you will absolutely love this.

It also made it into the allmusic best of 2015. Just as well they didn’t get Leonard to review it.

AllMusic has assembled our Best of 2015. Browse through and check out what music our editors have been listening to this year. 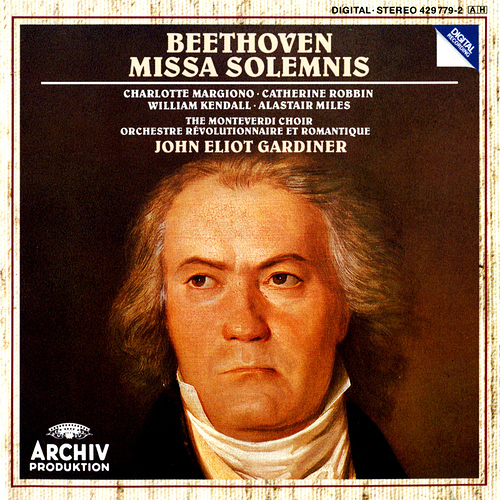 Bernstein live with Royal Concertgebouw Orchestra is my all time favourite. Never heard a more emotional performance than this one. The wonderful solo violin (Herman Krebbers) in the Benedictus and Kurt Moll’s moving Angus Dei alone are worth a try…

Yes. We started with that one at the top of this thread. But this thread was split off from another more tongue in cheek one about your worse reviewed music. So maybe it’s not obvious. looks like several threads are rapidly turning into threads about your worse (favorite) James Leonard review. Recognise the style?

Sorry for missing the OP. And, yeah, James Leonard seems to be focus on sucking the joy out of any rendition he reviews (Odes to meh).

Solti did several Missa solemnis’. I don’t have that Chicago Symphony version but I can see there is no review on allmusic. I have the 1995 Berlin Philharmonic version.

Again it is striking the difference in the reviews between Blair Sanderson and James Leonard.

Sanderson finds the musicality in a technically deficient 1982 proms recording but Leonard cannot in the technically sound 1995 Berlin Philharmonic (no less) recording.

Solti, is not everyone’s cup of tea but you know what you are going to get with him. And if you are in the mood for a gangbusters version (which I often am) you are not going to be disappointed.

Wow. Our friend James Leonard does not disappoint. But that has got me motivated to track down a copy.

Same for his Bernstein MS review. It seems a bad review from him should be taken as a compliment!

I wish we could have Gramophone reviews instead…

Yes. a Leonard stinker should be worn with pride. Probably means you’ve done something right.