MISSING ALBUM and I CAN"T FIX IT

I have renamed the album in the tag section of JRiver Media Center on another PC as there was a : in the Album Name Metadata. I deleted the files in the Folder of the Roon Core PC. Copied the re-tagged files into the folder on the Roon Core, Re-scanned the library. No Change. Created a new folder. Cut and pasted the files (tracks) into the new folder. Deleted the old folder. Ran the cleanup. Re-scanned. NO CHANGE. I don’t know how many other albums are missing but this is ludicrous. I should not have to go through all of this just to have an album displayed. JRiver Media Center doesn’t have a problem with these tracks. And, frankly, there are too many posts on this issue for you to not fix it. By fix it I mean just that. FIX IT. I can’t search the album or a track on the album and have it appear.

Hi @Robert_Broderm — Thanks for reaching out, and apologies for the trouble here.

The files weren’t in skipped files. I finally found them this morning under the wrong album. This points back to the problem of Roon having the incorrect data about an album. Another vote for allowing users to fix problems in the Roon database. In this case, the album, Into the Woods - Original Broadway Cast was displayed as the Instrumental version (which I incorrectly assumed was coming from Qobuz). When I went in and edited the album manually, it’s interesting to note that Roon still matches it with other Instrumental Versions and not with Qobuz’s Broadway version.

I am frustrated by technology that doesn’t work.

Apologies for the trouble here. We’d like to look into this a bit more to see what we can do better here. Would you mind sharing this album with us so we can take a closer look?

Ideally you can zip the files and share them via a shared Dropbox link.

In this case, the album, Into the Woods - Original Broadway Cast was displayed as the Instrumental version

Interesting; was this the 1987 original, or the 2002 revival? Roon seems to have no problem here with either version (I’ve not done any editing of metadata). Hopefully Dylan will be able to shed some light on it if you can send him the files. 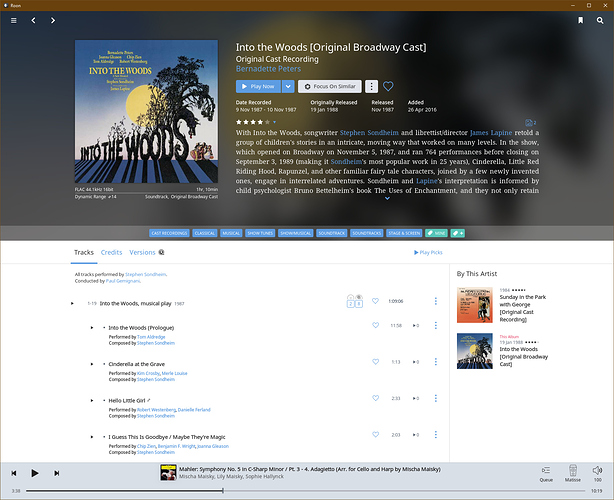 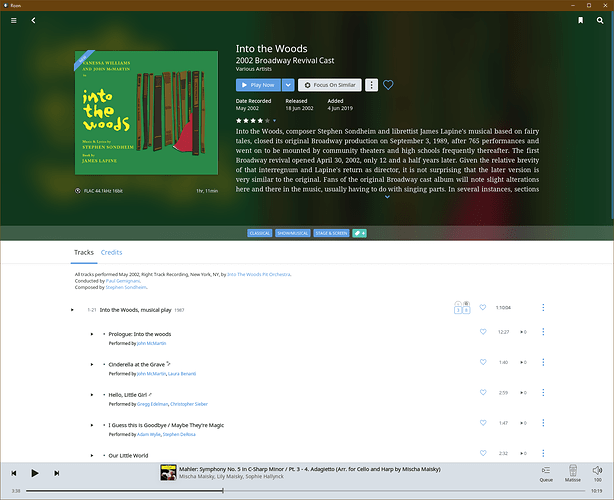