I couldn’t see Phil Collins’ album, ‘…But Seriously’ in my Roon library.

Renamed the album folder to simply But Seriously (removed the leading …) and it was identified and scanned. Will do some more experimentation, but wondered if this is a ‘feature’.

Yes, as per the link above filenames with a leading . are ignored by Roon because they are system files in some OS.

You can still have an Album title within Roon with a leading . just not a file name.

There is an ellipsis ASCII character you can use instead of three periods.

That should solve your problem. 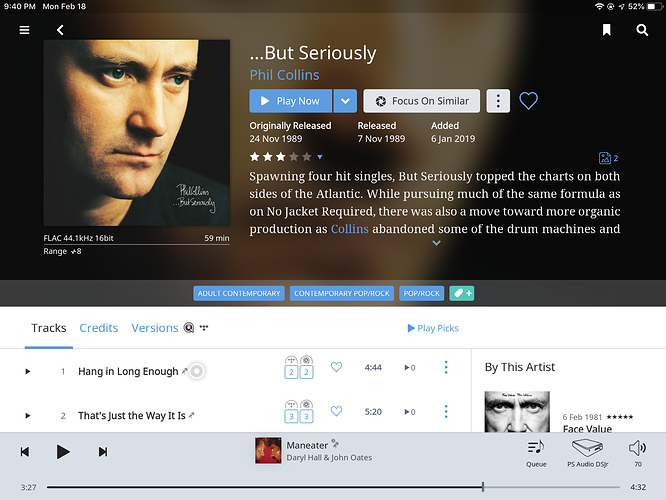 No … prior to the But Seriously in the album title directory…

For information, in case you are not aware also, … causes problems for EXPORTING also; eg for exporting playlists of tracks or entire albums for mobile use.

Thanks everyone for all the info, very helpful.

I have tracked down a few other missing albums in my library starting with … so useful exercise.

I was about to reply with a similar comment.

I was waiting for someone to say that. Purely legacy CD from the old collection.

Another I found was Dave Edmunds …Again - slightly better street cred, I would have thought.

Of course I don’t have any his CDs at all

Actually he was good in Genesis, and some of his solo stuff is fun. Not well recorded though.

This from the guy whose first record he ever bought was Showaddywaddy (who are actually still touring).

I can safely say I personally never bought one of their albums but I did have one bought for me in the seventies.