I’ve noticed some examples recently where i would expect to see an Album listed in an artist’s page that isn’t. Please see the example below for Paul Westerberg - 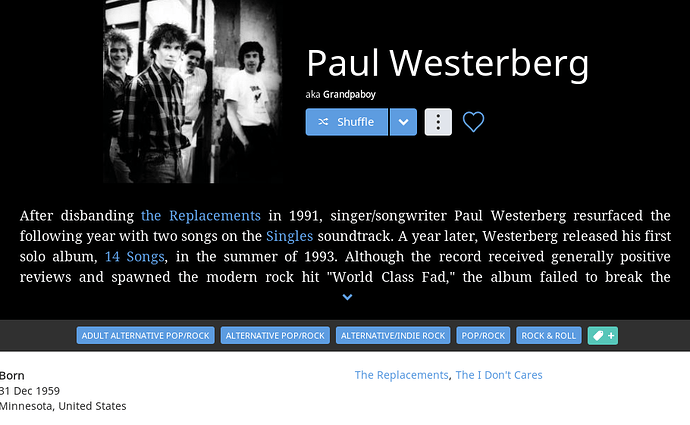 The artist names not only lists his pseudonym for one album at the bottom of the picture it has links for both bands which he was a member of that i have albums for. 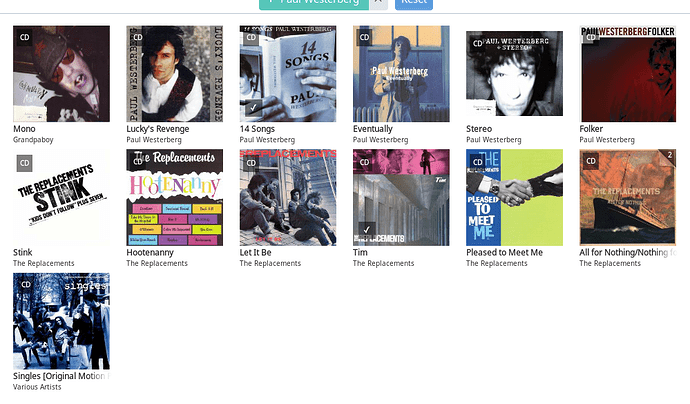 Noticeably missing from The Replacements albums are All Shook Down and Don’t Tell a Soul (both in my library), which is sort of ironic as they are both pretty much Westerberg solo albums.

Also missing are albums with The I Don’t Cares on both his artist page and on Juliana Hatfield’s page, even though both are listed as members of the group. is this an issue with the metadata for each album? if so where can i fix this at?

Hi @AgDev01. As far as I’m aware, focusing on Paul Westerberg as you have done will only bring up albums where he has an explicit credit. We don’t, at the moment, follow the artist --> band membership --> band --> album chain. Perhaps we should…

cc: @mike Have I read this one correctly?

Yup, the credit needs to be explicit. Making assumptions about band membership would lead to some sloppy false positives, particularly in groups where the membership has changed over time.

Think about a group like Foo Fighters – should focusing on Pat Smear or William Goldsmith bring up all of their albums?

Noticeably missing from The Replacements albums are All Shook Down and Don’t Tell a Soul (both in my library), which is sort of ironic as they are both pretty much Westerberg solo albums.

In this case, it certainly seems like the metadata should include a performance credit for Paul Westerberg. I took a quick look and it seems like he got composer and production credits, which means focusing on him in those roles should return the albums you’re expecting. As it stands, the performer credit is missing, so really this is about missing data.

For now, you can add him as a main performer at the album level or as Primary Artist at the track level. I think either should give you the results you’re expecting, but if you’re on a performer or artist page and you click “View All Albums”, you’re only going to get albums on which this performer is explicitly credited as a performer.

Thank you both for the responses. I certainly agree that line up changes would probably cause more harm that good if explicitly relating all albums in a band to all member/former members page.

I figured it was probably just a metadata issue with the albums in question.

@mike I went to both Don’t Tell a Soul and All Shook Down and added a Vocals tag for Westerberg which then brought them into The Replacements albums on his screen.

I then went to the album Wild Stab by The I Don’t Cares (a Westerberg, Juliana Hatfield project) and added vocal tags for each of them.

In this case instead of showing in its own section for With The I Don’t Cares on his album page it is showing under appearances What tag should i add so that it gets is own section? I don’t want to use Primary Artist at the album level as i don’t want it to show up under the artist listing at the top of the screen.

Just noticed that the tracks from the Replacements albums that I added via the tags are now showing in the Top Tracks for Paul Westerberg. While they are definitely tracks he preformed and i probably add the wrong tag to each of the tracks I don’t really want them listed as his tracks on his page as a solo artist, if that makes sense.