I am experiencing a problem with displaying album art and track info on the screen of my new Aries G1. The problem is described and discussed at Auralic forum last year!
I have a high specification Windows PC dedicated to running (the latest) roon software connected via Cat 5e cable to a a Draytek Vigor 2860 router - as is the Auralic Aries G1. I can provide further details if required but I wonder if @support could advise Auralic on how this issue can be resolved. Units from DCS and Naim work on this network as Roon endpoints without any problems!
Any help gratefully received though I suspect this isn’t really a problem with Roon - other than the Aries G1 declares itself to be Roon ready. To a degree it is - plays music just fine and artwork and track info displays perfectly on tablets and computers but surely in a Roon ready product (with screen) the display should show appropriate information!

Hi @Graham_Tandy I have an Aries G1 and had the same issues as you - not with every album but with many in my collection. I found the 6.0 beta firmware addressed this - there are other benefits too.

Unfortunately installing the beta firmware has not resolved the issue for me; but many thanks for the suggestion nonetheless.

Not an Aries owner, but wondering if this is related to the higher resolution images available in 1.6. Can you share details of some albums that do/ don’t display and share a screenshots from the Album Editor: 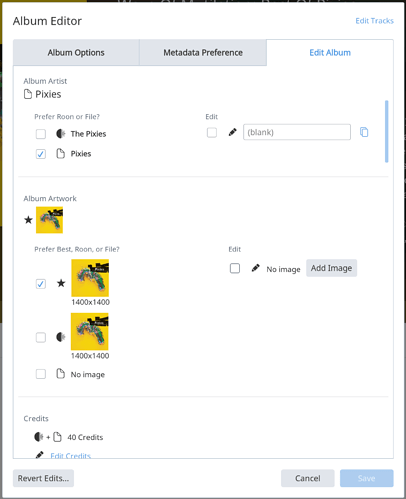 It could be related to the higher resolution artwork in 1.6 but I have not seen any return of the symptoms the OP described since 1.6 and the Beta Aries firmware.

To explain the problem a little … Auralic stated that when running as Roon endpoint, if the ‘box’ had not received the artwork by the time that a track was ready to play then it would stop loading the artwork (music loading was prioritised), if you paused and resumed a track often the artwork would appear. Often (at least in my experience) this would affect higher resolution tracks/albums more than 44.1/48k - presumably because the data volumes were higher. In the Beta firmware they changed this behaviour so the artwork would continue to be loaded.

Did your G1 also fail to clear old track data from the screen? Mine frequently continues to display track details from the last album for which the artwork loaded - the ‘old’ artwork disappears however. Strange behaviour indeed.

To be honest Graham, I cannot recall. I purchased my G1 in October and within a short time the Beta firmware was released, but during the home demo a lot of the artwork did not appear when using Roon.
If it helps, my setup is: G1 ethernet connected. Roon core running on a QNAP 451+ NAS, 2200 albums all local FLAC or DSF (no Tidal or Qobuz) o/w 1/3 hi-rez.

Perhaps I should further add that the problem only occurs when using Roon. If I stream music via Airplay or use Auralic’s Lightning DS everything works as expected on the G1. Therefore there seems to be some issue with the way in which artwork is transmitted by Roon / received by the Auralic Aries G1.

Is anybody else encountering this problem with Aries G1? If I connect my Naim NDX2 in its place I have no issues with displaying artwork or track timings. Auralic suggest problem arises when they check that artwork is really artwork and not something trying to insert malicious code!
Could @support please comment on this as I feel that the Aries should not really have Roon Ready status in its present state?
Note that display on the unit works as expected if one uses Lightning DS.

We are investigating this issue with our in-house hardware, and we hope to have an update soon. Thanks for your patience while we get this sorted out!

I am pleased to confirm that the Aries G1 now displays artwork and track info correctly with Roon following Auralic updating their firmware - see https://support.auralic.com/hc/en-us/articles/360034516274.

Hope this resolves the problem for other Roon users who have encountered similar problems.

It is a pity that Xuanqian Wang does not focus on shortcomings with the Auralic products rather than blaming his customers’ networks and hardware!