Hi Gang - I am experiencing an interesting anomaly on the multiple performances link, please see picture below. This is for the album Revolver by The Beatles and as you can see, the multiple performance link is showing up on the Lennon/McCartney songs but not for any written by George Harrison. In this example I have multiple versions of Revolver in my library and those are missing on the George songs. Same thing is happening on all of my Beatles albums for the George songs. Any known reason for this? 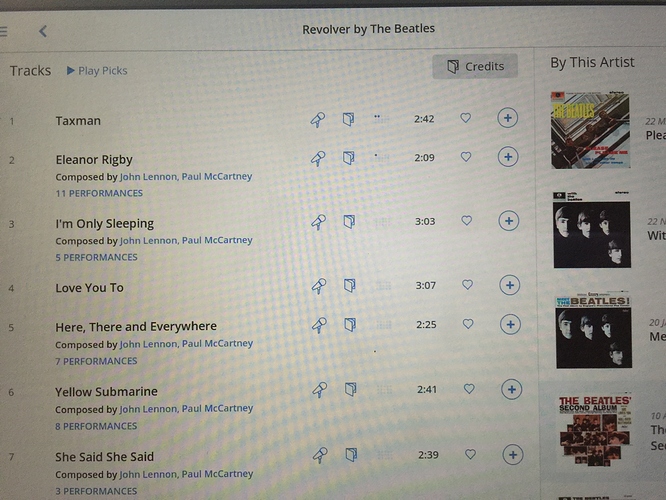 Seems this is usually due to missing or slightly different composer information. See this for more information.

Not all instances of a work are listed Support

I have seen that as well with missing or different information but in this situation with the George Harrison titles all title and composer information matches.

Seems you are missing the composer data for Taxman, but you are doing a lot better than me I have no composer data for any of the songs and hence no links to any other performances of these works (of which there should be a few)

I have tried to edit the Album data and identify a better match with more Metadata but this is the best one.

Why I am missing metadata that seems to be available to others? 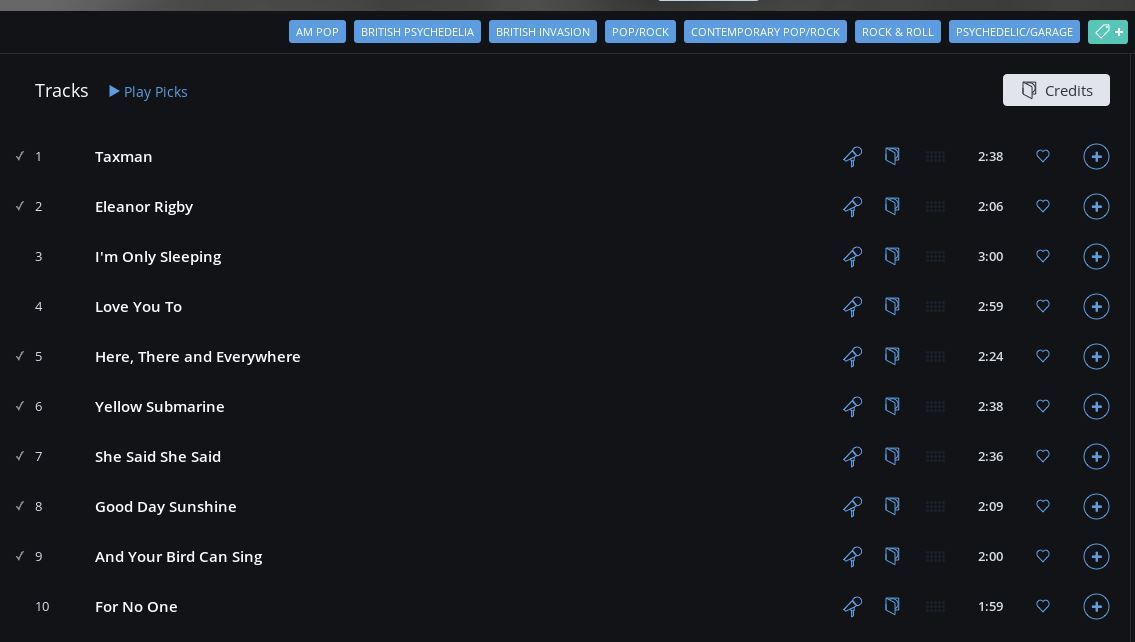 Ok even after the server problems that have now been resolved and after rescanning my library and trying various version of this album I still get no composer data fro any of the tracks for Revolver. This is the same for all of my Beatles albums, though I do get some data for the odd song or two on some albums.

When I look at All Music I find the same review and that this has the complete meta data with composers for every track so why do I not get this data? Why can others such as Brian here get this in Roon and I can’t?

If I select other versions and go to the Tidal version then all the composer data is there. What is going on here? Why is so much metadata missing in albums in my library? How do I get this data added? If its missing on standards such as the Beatles where else it is missing?

I am now starting to see more and more “missing information” on many very classic/well known albums and I am starting to loose confidence in Roon’s ability to find metadata, which I thought is what it is all about. Any thoughts on why I am not getting this data?

Composer data for Taxman is on all versions of the album I have. It’s just not indicating the performances for any George Harrison compositions.

Yes I realized I was not understanding things correctly. Roon has the metadata for the composer for all these tracks it is just not showing on this screen. You need to click on the folder looking icon to find this if it is it not shown on this view.

Not quite sure what the criteria for showing composer on this screen is or not. Seems it could be two things. Firstly whenever Roon finds other performances in the library it then shows the composer and the number of performances. Second is when the composer is different to the main artist(s) on the Album. Not sure if this is right or not.

So then this leaves me with the same problem you originally raised that Roon is not finding multiple performances of many songs even when the title and composer are the same in the metadata. Taxman being one example.

Sorry for any confusion caused here.

This is how Mike has explained the display of composer credits it in another thread earlier today.

"Composer credits are displayed on album details when they’re sufficiently “interesting”, meaning the composer is notable or figures prominently in your collection.

That’s why cover versions often jump out – if you have a good deal of Bob Dylan in you collection, performances of his works are probably interesting to you, and linking back to other performances is important context.

At one time we showed more but it was really unusable, particularly for pop albums where a song could have 20 composers."