The little animated “now playing” icon does not appear in certain circumstances. It happened on Qobuz Kanneh-Mason’s “Romance” album, which is one of the few Qobuz albums with multi-track compositions properly grouped.

If one hits the play icon (on screen, not popup) next to the composition title, the now playing icon will not appear (at least on this album). However, clicking on an individual movement’s play icon will cause the animated icon to appear. 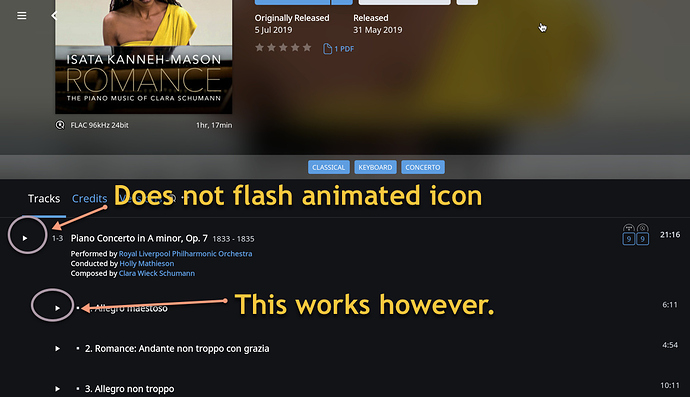 Update: seems to be album specific, because TIDAL’s version behaves the same way.

Isn’t this by design? The animated icon appears next to the currently playing track - not by the composition title…

for this album, it doesn’t appear by either.

Well, I’m seeing the animated icon, but you apparently are not…

Restarting is the equivalent of aspirin. Works about 90% of the time.

Nothing to see here folks. Get back in your cars and move along.