I have just searched for albums of UB 40 in Roon (I have a Qobuz account) and could not find the album "Signing Off). Roon gives me a total number of 39 albums for UB40. With a direct search in Qobuz I found two “Signing Off” albums and a total of 59 Albums for UB 40. I would expect to find at least the same number in Roon (I haven’t saved any UB 40 Qobuz Albums to Roon) . What’s wrong here?

Using the search term UB40 (not UB 40), Roon identifies both versions from both Tidal and Qobuz here in the U.K. If you use the album title for the search what do you get?

The search term UB40 or UB 40 doesn’t make a difference as the artist UB40 is found in both cases. If I look for “UB40 Signing Off” I get a track list. I selected the first track and then found the two Qobuz albums under the “Versions” tab. At least the workaround works…

The thing is I don’t need the workaround. It is there so something isn’t right about consistencies in the way search works. I also have to say that the latest release by one of the UB40 ensembles now performing, For The Many, only seems to be on Tidal. The dub version never comes up on a search but is presented as a version when you select the full release.

I at least find the album For The Many and the dub version pops up under the Versions tab. I find it weird that your search comes up with both „Signing Up“ albums and mine doesn‘t. Just for the record, I am using the latest Roon version (1.6/416) and switched from Tidal to Qobuz at the end of January. Could this be corrupting my search? Just wondering why my Roon/Qobuz only shows 39 albums for artist UB40 when there are 59 albums with a direct Qobuz search…

If there is an album that is available to stream in Qobuz with your subscription, those albums should be in Roon as well. If there are multiple versions of the same Qobuz album available, you can find those in the Versions tab of the album. Since these different versions are not displayed on the main artist page the counts may be different between what is seen in Roon and Qobuz, but those versions are still available in Roon.

The following album shows up in my favourites in my Qobuz app but not in Roon Qobuz : 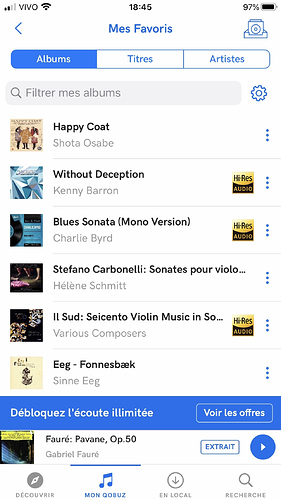 Any idea what the reason could be ?