In French it’s missing a space between birth year and age.

I think that it happens for all languages other than English, Spanish version included.

Thanks for the report, I’ll pass this on to the team!

@noris the translation tool is automatically deleting spaces at the beginning and the end of the string. 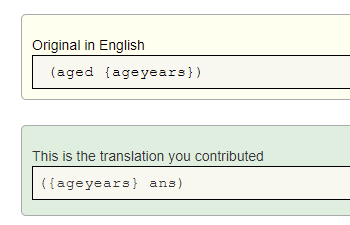 Is UTF-8 code handled ? A solution could then be %20({ageyars} ans)
I refrain from trying, I don’t want to make things worse…

In the meantime I have changed the translation to –({ageyears} ans)