I have been massively irritated by the Moby weirdness in Roon. Forever.

Going to Moby the artist yields the below: 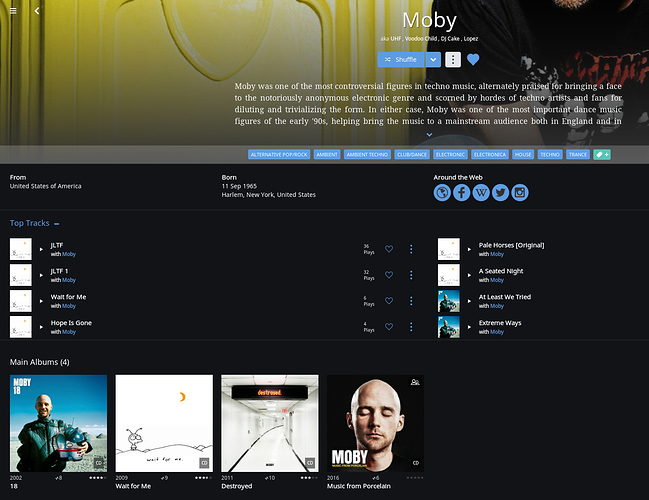 I have 42 Moby albums in my local library, probably some more from Tidal/Qobuz.

It has been so frustrating to deal with Moby on Roon!!! Jeez!!!

Exactly the same issue with Moby, would edit albums so they appear and days later they would be gone…

If I search for Moby and NOT go to the artist, and go to “show me all albums” I see this: 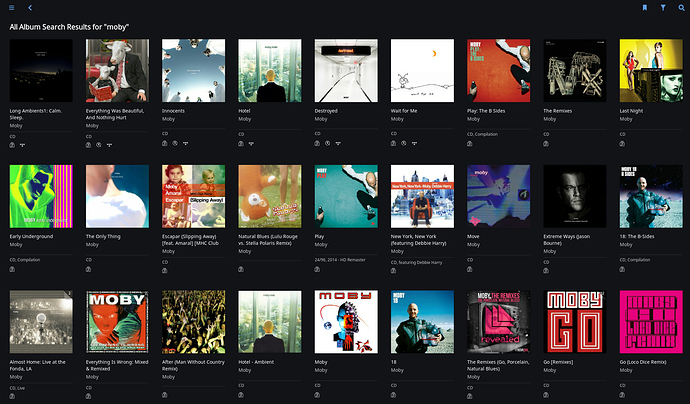 So all those albums are NOT Moby’s? In spite of it saying Moby? WTF???

Sorry for the annoyed tone, but I am livid: It is not only bad, it changes over time!!!

Moving this to #support because this feels like a client bug to me.

So @support when I search for Leon Russell it only shows my library LPs and I cannot find a way to see the Tidal LPs no matter how hard I try… I am logged in and can see my Tidal Favorites and play them. And if I don’t have the artist in my library I can find them on Roon via Tidal… Very annoying!

So all those albums are NOT Moby’s? In spite of it saying Moby? WTF???

Is it possible you have more than one artist listed as Moby in your database? My Moby albums are all showing correctly (I only have 8 albums, but they’re all there) but I have had situations where albums were split between two artists with (possibly) identical names. It might be worth checking that this isn’t happening in your case. If it is, merge the artists.

Please don’t hijack this thread with other search issues.

I have easily 40 local albums that are Moby and Moby only. If you go to some of the albums above it will show just Moby. Moreover, the file metadata in my library is pristine. So no.

So when you check on the artists you definitely only have one Moby (as below)? If so, there’s clearly something amiss that needs further investigation. 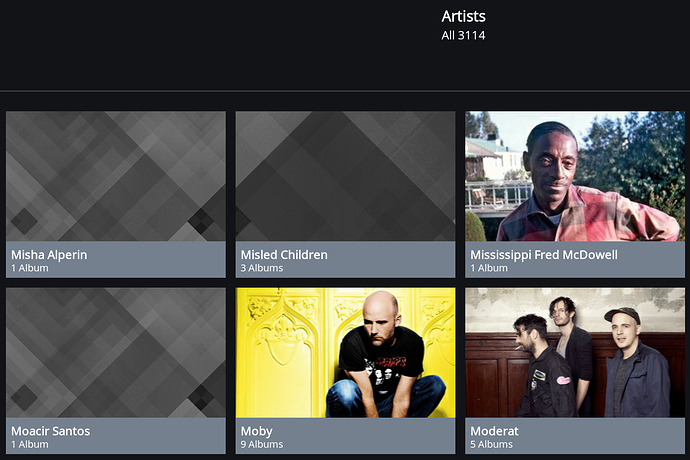 When I search for artists I have only one (lower center in your pic).

Moreover: When I go to one of the albums NOT listed in main albums and I click on the artist (Moby) I end up in the Moby screen I showed, where the album I came from is NOT listed!!!

In which case the only thing I can suggest is:

The reason I suggest this is because I’ve had issues with mis-identified albums where no amount of tinkering with the metadata made any difference - the erroneous info seemed impossible to correct - but starting over with exactly the same album seemed to fix the problem. You may have already tried this.

Have not tried this. Not the easiest thing to do given how I organize my local files (source/artist/album). I will wait a bit for others/support to chip in.

I might be misunderstanding you, but that sounds like much the same structure I use (source disk/M/Moby/albums). If so, all you’d need to do is copy the Moby folder to another location, clean/rebuild the database, then add the folder back into its original location.

I would suggest not doing any cleaning up until Support has had a chance to look at this. You may destroy evidence and make it difficult for them to fix.

I have Moby from CDs, bandcamp, HDTracks, Qobuz, Onkyo, himself. That’s what I mean. My directory structure starts with the source (CD, , etc) so for example all purchases from HDTracks are under that directory, all ripped CDs are under CD, all ripped SACD are under that, etc. I have about 20 sources total.

Ah, ok, that complicates things then - I was assuming that ‘source’ referred to a single storage location. Hopefully @support will be able to shed some light on the problem.

have you (or anyone out there) noted this issue with any other artists? Because I’ve had it with several artists who have a large number of albums in my library.

Please don’t hijack this thread with other search issues.

Sir, @lorin asked if it was happening to other artists.

It isn’t just your Moby concerns, legimate as they may be, it’s other artists also.

So, not meant as a hijack, but as a clue.

I would suggest not doing any cleaning up until Support has had a chance to look at this. You may destroy evidence and make it difficult for them to fix.

This. Please give support a chance to get involved. It is Sunday after all…

Search for “Moby”, scroll down, find “B Sides”, click on that, click on Moby again takes me to the Moby artist page, where “B Sides” is not listed… 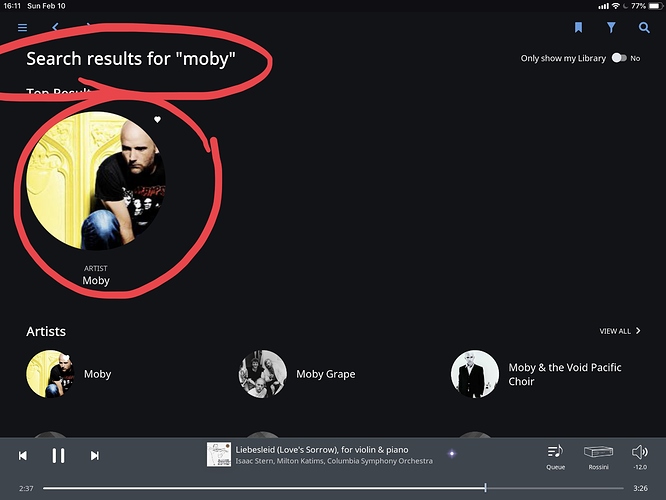 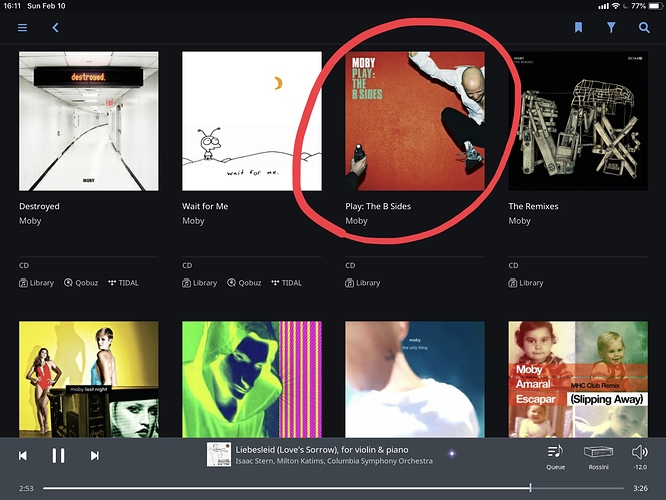 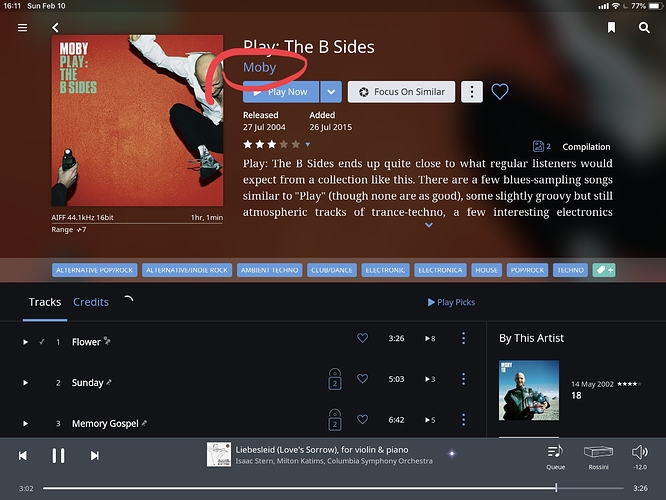 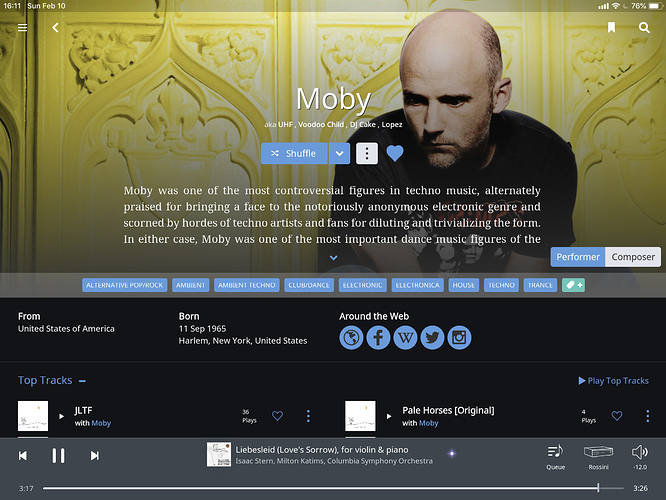 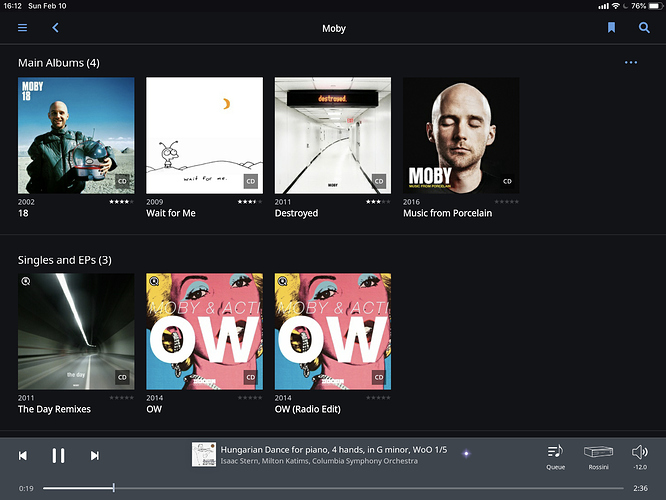 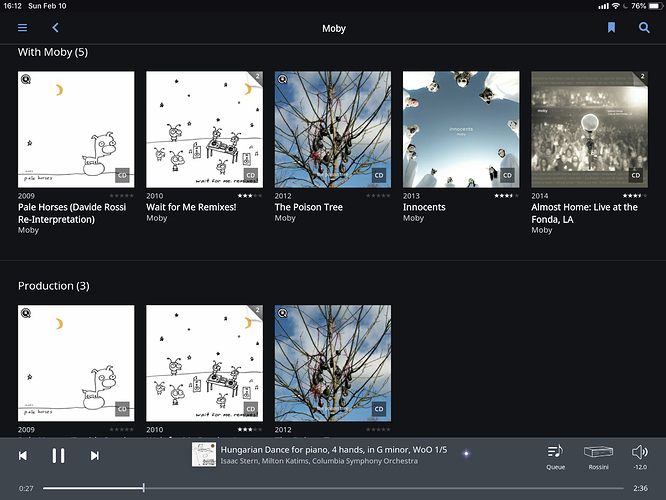