Yes, no issues. I did a ROCK install on a Dell Optiplex 7010 a while back. You can find performance figures and power consumption in the Performance Matrix thread, link in the top post:

I know there are recommendations available for chosing hardware, but there are quite few performance reports from real world examples. Are there more people than me who wants to know what they can expect from, say, a Gen 6 i5 NUC running ROCK compared to an older PC with an Intel Core i5 3470? If so i suggest that we create a matrix within a limited set of boundaries to keep it simple and reasonably comparable and understandable. The only way i know of getting performance figures out of roon is…

Extremely helpful, and I did not know about this spreadsheet. Thank you for the assist!

If the performance is essentially the same, I may just opt to run the core on Win 10 and enjoy it rather than try to make a “MOCK”

Try to run ROCK if at all possible. It will take a bit of time and effort but it is effort at the front end rather than the effort needed to maintain Windows on what will essentially be a dedicated server.

Yes, that has some advantages, as well as disadvantages.

Win10 ~ Relatively high maintenance, but you could automate CD ripping with automatic injection into your Roon library, as an example.
Or run other music server software simultaneously, such as Minim Server or so. Similar performance though, only slightly slower and more power consuming.

A third option could be Vortexbox as a base on this machine? It’s easy to install Roon Server via the terminal and you would have the Linux stability and speed as well as CD ripping.

How do you all measure the watts that the ROCK uses?
What gear is used?

I use a simple energymeter, costs around 15$. 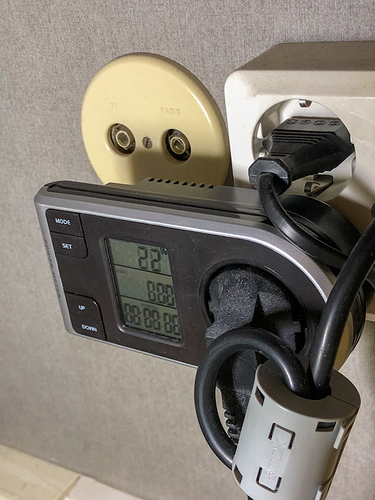 Oke, thanks for the hint.

Thank you for the tips!

Just thought I would resurrect an old macmini2012 i7 server 2.6ghz iirc. This was an old server and had I had installed 2 x 265gb raid 1 ssd’s back in 2013. I thought why not split the rad and do a dual install…one ssd with Mojave and the other with Catalina…so I installed Mojave and that took a while off of Usb3 flash drive. Done.

So held down option and rebooted…there was the Mojave bootable and a windows option. A min or so later I have a ROCK install done…one issue was I had to use a unitek usba lan interface dongle as the internal lan didn’t get an IP address. Other issue is it can’t select to restart using that drive as default, so restarts need to be holding option and selecting the windows option…but it can run headless after that.

Maybe if I removed the format on the ssd for mojave it could boot as a rock only, and maybe I could format the other disk for storage…or maybe ripping cds

You get cd ripping with ROCK to. I was using Vortexbox for Roon for a few years as I had switched from LMS and used it as my server for that prior. I decided to go ROCK on the same system but still kept Vortexbox for automatic ripping running in a VM on my NAS. Since they added this to RoonOS I ditched Vortexbox completely and use ROCK for everything. Yes I have the add metadata for use not in Roon but I am not ripping hundreds of CD any more.

So an update on this one as I haven’t posted in this thread since I tried the last bit of kit.

I’m using an HP 620 G3 as my ROCK host at the moment. This works flawlessly in every way, but then that’s probably because its spec (chipset, ram, drive layout etc) are identical to an official NUC.

The only difference being my I3 is a 7130U rather than a 7100U so it has a tiny little bit more horsepower.

Runs like a charm, doesn’t bat an eyelid when running DSP to two zones and is very compact.

HP actually sell a dedicated add-on module with a CD drive inside it, that bolts to the bottom of the chassis. Meaning you have an all in one mini PC that actually incorporates a CD drive. So I have this connected for ripping via ROCK as well.

All in pretty perfect.

My only criticism, is that in the listening room, with very quiet music, you can just about make out the fan whirring. When I move home, i’ll shove the HP into another room, and use a little HP thin client as an end point (fanless device).

Sir
Have you got an Apple Watch as well hint hint wink wink?

Not very strange, but I have installed ROCK on my SonicTransporter i5 (bought about 3 years ago). I was having issues with STi5 not booting. Attaching a monitor I saw all sorts of errors. Rather than send back to Small Green Computer, I simply installed ROCK on it. (I only used the STi5 for Roon, not the other programs it also allowed.) I ignored the “BIOS” instructions, installed ROCK and copied the CODEC file and everything went well. STi5 connected via ethernet.

p.s. I restored a roon backup (1.7) and all was picked up OK in terms of my library, except Roon reanalyzed all my files.

Running Roon on my old IBM3650 M3 which is also running my Plex server under Linux. Cost me £200 with 2x3GHz hex core Xeon X5675’s and with the graphics card and RAID expansion to expand to 16 drives cost me less than £400.

Using ROCK on some machines can be a challenge, hence this thread.
Machines running Roon aren’t really MOCKs.

I had the almost the same machine. It drank electricity, mostly because of the fans.

Problem is Xeons aren’t the best processors for Roon.

It’s not a problem re power - it runs my Plex server and I can remotely switch it off and on via the management interface.

Not looking at running anything I can help under Windows - I feel more in control of Linux rather than Windows.

I really hope that Roon isn’t doing any audio conversion for me… Although I am very new to Roon!

When playing a track you can look at your signal path by clicking on the light next to the track title at the bottom of the display.

Mr Fix it’s post inspired me to try this since I have a 2012 server lying around, as well. It worked exactly as he said. Fast and easy. On a whim, I decided to take it a step further. I took the hard drive loaded with ROCK out of the server and put it into an older 2010 2.4Ghz Mac Mini. It worked instantly. Loaded up into ROCK without using the option key.

Because it is such an old slow machine, I wanted to find its processing limits. I have to tell you though, I couldn’t find them. This thing handled every DSP option I could throw at it without a single hiccup. It was processing better than my other Roon servers (quad core 2012 Mac Mini and my 12 core Mac Pro). Clearly the “optimized” in ROCK is no joke. They let this thing off the chain. It is literally the only machine running Roon server in my house that can play DSD256 to my Chord Mojo without a single stutter. For the time being, it has become my primary machine and it was only $100 on ebay.

I raise my glass to you Roon, this ROCK thing is very good at its intended purpose even on an unintended machine.

@Papi_Chulo I have a couple of old 2010 servers might give this a go too…Im guessing if the only drive in the Macmin is Rock it will boot up without the option - My mini 2012 server has 2 SSD 256GB drives in it.

Did you need the external USB-Ethernet or did you manage on the built in NIC? Assume you are still on the 2010 unit.