So I have been scratching my head over the fact that Tidal albums in my library do not have the genre information. I just imported an album (Electronic genre) from Tidal and when it imported Roon dropped the genre tag. Anyone else notice this?

Added tonight, had genre before, but gone after…

Strange. It’s fine in Qobuz (I don’t have Tidal). It must be a Tidal issue. 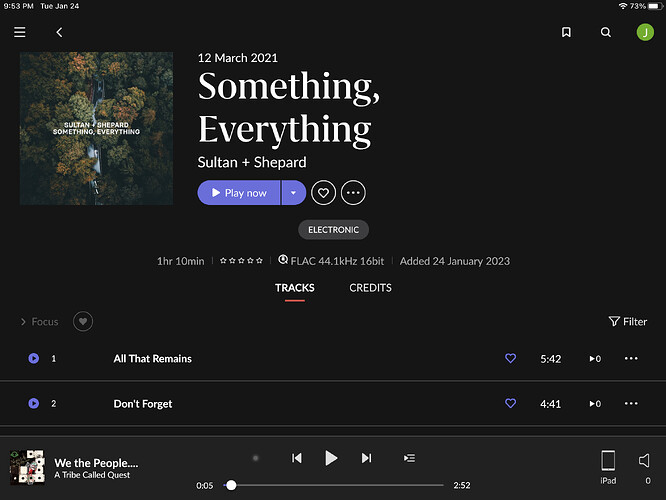 Interesting. In Tidal before import the genre shows and not after, it is easily added after the fact. Perhaps an interoperability problem?

It’s also apparently a recent problem as I just checked some older imports and the original tag is present. (using revert will remove added tags but not the original if present.)

All done adding to my Genres, 56 total. Roon finds the content in seconds, no lag when accessing and playing content.

Is that the only album so far exhibiting this issue?

I gave you one of my votes

although it will need a lot more…,

I had a rethink about this. Check your Import Settings (Settings>Library>Import settings). The first item under Genre settings is “Use genres from Roon’s metadata database”. Mine is set to “No” as I don’t want to add all the crazy genres that Roon or Qobuz has assigned. So it requires me to add my own genre. I use a relatively simple genre scheme. I think if that setting is set to “Yes” then the genres from Tidal will be imported when you add an album to your library.

I use a relatively simple genre scheme.

The number of genres and subgenres in the genre editor is mind boggling (and overwhelming!).

No, all of the imports over the past few days at least exhibit this issue. I am not exactly sure when this started and whether it is specific genres or all. I will update if I see any further changes.

It’s always been set to yes in my case and it wasn’t working with Tidal imports in recent days.

As far as I know, the library import settings only apply to local files, not streaming

Back in 2020 when I signed up with Qobuz I noticed the Genre tag would disappear when I added a Qobuz album to my library.

I had to change the use Roon’s genre import setting to yes for my added Qobuz albums to show the genre tags. 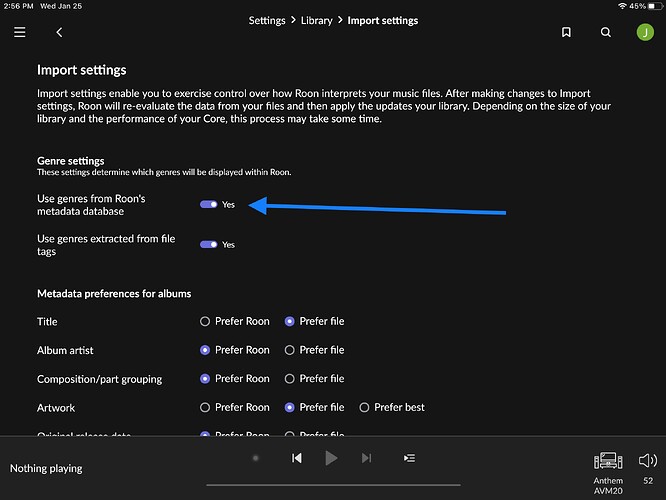 Interesting. There are some import settings that don’t have an effect on Qobuz, e.g. these:

because it is driving me crazy that so many Qobuz albums have the version in parentheses in the title and it stays that way when I add them to my library, and then I have to go and edit the album title and manually enter the version in Roon’s version field…

Maybe different settings behave differently in this regard

(Side note in case someone from Roon sees this: It should be parentheses as it’s plural like brackets et al.)