I moved my Roon Folder to the wrong sport and don’t have the playlists. I now have a “RoonServer” folder on my W10 machine and Roon is working great. I’d like to get my playlists from my previous folder that I took from my MacBook. How do I do this easily without corruption? 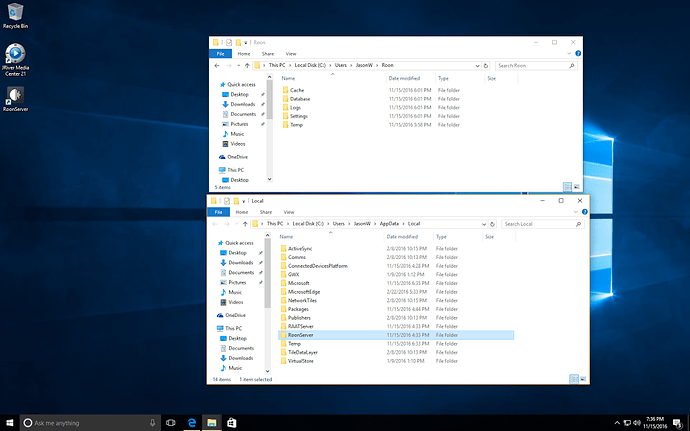 These are the two folders. Roon is wrong and the other is the right one.

Half of me say to open each folder and replace the “RoonServer” folder with all the “Roon” folders except applications. Leave that in the RoonServer folder.

So I can rename the old folder “Roon” to “RoonServer” and delete my new folder?

I can’t say for sure as I’m not sure quite clear exactly what you have done in the transfer proces. However I suggest you make sure you have a backup of your original Roon folders somewhere safe and once are sure of that give what you suggest a try. If it works great if not uninstall Roon from your new machine and start the transfer process over again with the backup folder.

Hopefully someone from Roon can help. I’m pretty sure I can delete the new “RoonServer” folder and put my old “Roon” folder there but rename it to “RoonServer”.

I’m not with Roon, but I’ve changed from Roon to Roon Server on my Mac Mini in the past. I’m assuming that’s what you’re trying to do.

Anyway, yes, make sure Roon Server is not running on the new machine and delete the RoonServer folder. Copy the old Roon folder to that location and rename it to RoonServer.

Just make sure you keep a copy of the old Roon folder as backup just in case you have a problem.