The album in question is The Man by Van Morrison, in MQA. It says it is a compilation.

But I can’t find it in Roon. I looked at the suggested topics where they say I should favourite and play the album in TIDAL, then close and re-open Roon, but that doesn’t work.

Here is the link to it in TIDAL.

Can @support please look into it?

Can you confirm what region your TIDAL account is for?

My region is Canada

Thanks for confirming, @G_Man.

It looks like for the Canadian region this album should be available. Can you share some screenshots of the albums available on the Van Morrison artist page so we can take a look? 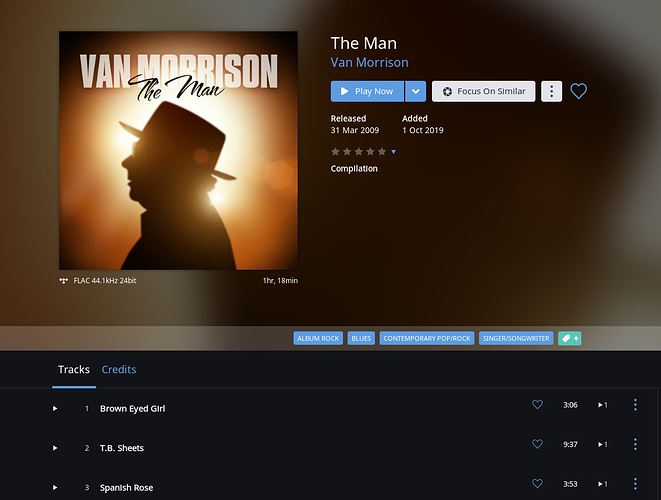 It looks like you were able to add it okay. Are you referring to a specific MQA version you’re looking for?

We took a look at what we have for this album, and the version you’re seeing does have one MQA track, but the entire album isn’t MQA (so it’s not listed as an MQA album).

I wouldn’t have bothered you for just track.

But now I realize, Roon is somehow replacing that track 16 which is supposed to be MQA with a non-MQA version. In Tidal the track is called Beside You (Re-recorded Version), but in Roon it is called only Beside You and no MQA.

@G_Man I wouldn’t worry about it. I think we are all learning something from this! I suspect Tidal mark anything higher than 44/16 as ‘master’; it doesn’t have to be mqa. This track plays as 44/24 in Roon. And it was a Van Morrison track I didnt know and wouldn’t have found otherwise, so thank you!