I am playing Ash and Stone by Joshua Hyslop. The Tidal file is authenticated as MQA 44.1kHz/16bit. When I play it to a non MQA capable Grace m9xx, the file unfolds to 88.2kHz: 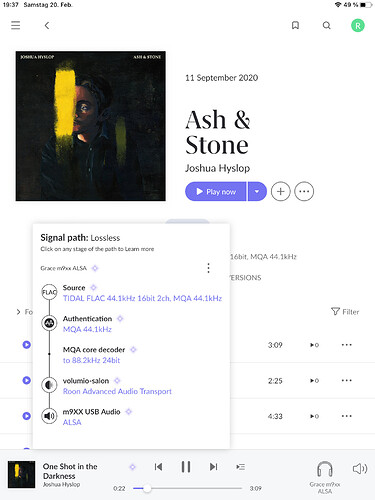 However when I play it to a MQA capable dCS Rossini, the file unfolds to 44.1kHz (as it should). 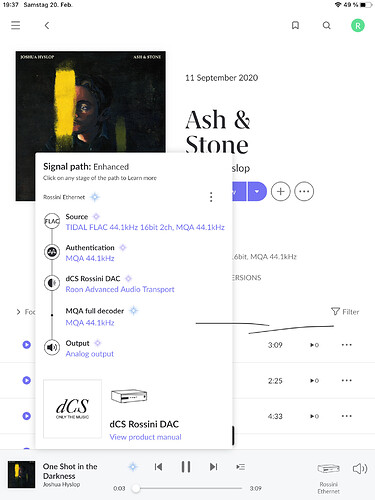 Am I missing something here?

Core Machine (Operating system/System info/Roon build number) Nucleus 1.8 (build 756) Network Details (Including networking gear model/manufacturer and if on WiFi/Ethernet) Ethernet, Apple Time Capsule Audio Devices (Specify what device you’re using and its connection type - USB/HDMI/etc.) Mytek Brookly Bridge via Network RME ADi-2 DAC fs via USB from iMac Description Of Issue I get this strange behavoir that I can not understand, but only with Warner mqa files streamed from Tidal. When…

What you can’t see is that your Rossini will also be performing the first MQA decode to 88.2k “MQA Core”, then rendering it at whatever rate it renders at.

Thanks @joel
I thought something like that was going on

What I don’t get is why under album info, the MQA sample rate might show 44.1Khz but when I play it back Roon still decode it to 88.2Khz?

Is it that the sample rate displayed under info is wrong or is it that Roon upsamples every MQA no matter what?
I’m using a DAC without MQA support.

That is how MQA works. Roon is just showing you what is going on. The first unfold is always to 88.1 or 96 depending on source.

It is what it is I guess, thanks.

Being a sound engineer the more I read about MQA the less exited I am about it, good thing I signed up with Qobuz back when it was possible using a VPN (I’m in Canada).