Personally I am totally opposed to MQA in any form, especially if my money that I pay to Roon ends up in the hands of MQA due to licensing etc.

But for me it seems that a good intermediate solution would be the SOX upsampling trick reported to sound good, i.e. simular to the one in Auralics products. I.e. add a MQA upsampling option in the Roon DSP and let the upsampling method be possible to be set differently when the content is MQA.

For example if you have a good DAC you probably want:
MQA --> MQA upsampling
Everything else --> bit-perfect to DAC

From what I have understood, its the first MQA unfold that is the important one, the second one is basically up-sampling. So if Roon could do the first unfold, and then allow DSP on that, you could combine the best of MQA with room correction or other DSP. The end signal going to the DAC will be 96 khz PCM, but thats ok.

I too think the majority of MQA decoding is done generically in the first unfold. This is done in Audirvana and TIDAL desktop apps, and Audirvana itself will let you upsample that unfolded signal if you so wish, or apply any number of AudioUnits filters to it, and of course Dirac room correction if you have that set up.

Tidal should definitely do MQA on mobile for their own interest. It will never fully take off until they do.

Isn’t it three unfolds for MQA?
I’m using a Meridian Explorer 2 in exclusive mode so Tidal doesn’t do the first unfold.

Only way to get above 24bit/48KHz on an iOS device is to go over the USB interface. This is pretty niche if you ask me.

12 posts were split to a new topic: Tidal understands HiRes as MQA. That is problematic

Isn’t it three unfolds for MQA?

A first unfold that does 2x original sample rate and is the same across the board followed by upsampling with MQA determined filters. The latter is the “rendering” stage and is tailored to the DAC in the sense that the MQA filter definitions will map to specific DAC settings that are DAC chip dependant.

The Dragonfly interprets the MQA filter specification in the PCM stream from the first unfold and translates that into the appropriate ESS upsampling parameters. There is no change whatsoever done to the ESS DAC filters in the MQA firmware update for the Dragonfly.

You are talking about the Dragonfly which is a renderer. Pretty sure the Meridian does all three unfolds. I don’t think the Dragonfly has enough power for the full unfold. In fact doesn’t Tidal do the first unfold with the Dragonfly? It’s turned off in Tidal for the Meridian.

I don’t know where you’re getting the three unfolds from.

I am using Roon to play an album that is in Tidal in MQA but of course my Kef’s can’t play it. But Roon sees it. 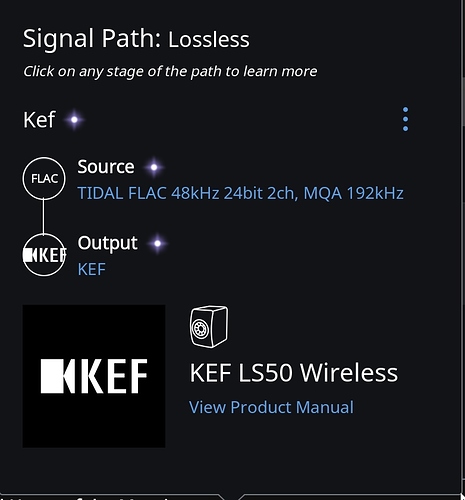 I am using Roon to play an album that is in Tidal in MQA but of course my Kef’s can’t play it. But Roon sees it.

That’s just metadata in the file saying literally what you see.

I’ve read a million debates about MQA and a lot of technical documents. I’m not really interested in debating the merits of it here just talking about it and Roon. I’ve already gotten off track enough myself here.

My biggest concern with MQA is, that the guys at Roon put their limited resources into MQA instead of (in my opinion) more important things like a good working radio function with an intelligent recommentation system using the whole Tidal catalog showing me new music based on my listening history.

My biggest concern with MQA is, that the guys at Roon put their limited resources into MQA instead of (in my opinion) more important things like a good working radio function with an intelligent recommentation system using the whole Tidal catalog showing me new music based on my listening history

Agree with you. But my impression is all of the technical aspects have been ironed out for a long time. Recall Auralic had MQA decoding fully in their Aries at CES 2016 (Jan 2016!) and MQA Ltd stopped them AT CES from demoing because they realized the impact. Auralic was mega pissed (that is a technical term too). So I think all of these technical issues are indeed solved.

But then if that is correct… What is taking so much time? Are they banking on Bob Stuart to be drunk one day and have him sign the license?

If I were to be realistic, I think they have probably stopped talking about it and it will be what it will be.

But then if that is correct… What is taking so much time?

Thats easy to solve, just add an optional MQA fee to Roon, and only enable MQA unfolding for those users who pay for it. Then you send the extra MQA fee to the MQA guys (maybe keep a little yourself as well).

We are all rich audiophiles with Classe amps and Wilson speakers, so who cares about a few extra dollars/year

Oh, at the current rates, we have no problem eating the cost for users that use MQA… but to give them a fee for our entire userbase (even those that don’t use MQA) is just a bad business call for us. Anyway, I’m sure you can appreciate that “simple” solutions are not really a thing in legal negotiations.

One option on the table is a larger extended fee.

What are the options Roon has proposed? Could it be a setting in the DSP config that applies MQA decoding as the first step, and the user count that enables it grants a license payment to MQA? And is this per output device? And is this full decode or first unfold?

I presume Audirvana is paying a license to MQA per software license. Today the multiple output devices with Audirvana is out of the bag as it can stream to a upnp renderer and you can have as many as you want.

What are the options Roon has proposed?

We aren’t going to do this publically… I just wanted to set straight that this is truly not a technical issue.

I presume Audirvana is paying a license to MQA per software license.

I presume the same, but I do not know for sure. However, Audirvana and Roon are not the same business. We have no plans to stay limited to computer audiophiles forever. Our upcoming Nucleus release, and previous ROCK release is an example of us expanding markets. The “Custom Install” market that we pitched at the CEDIA Expo just weeks ago does not care for MQA even a little bit, but they do want Roon.

One option on the table is a larger extended fee.

An additional fee would be fine with me if Roon did the unfolding to 192k, even to a non-MQA DAC - not just a first unfold which Audirvana added for free for their customers (whether they used it or not).