Been having a weird problem recently.

For a while, I’ve kept local copies of recordings I already owned on the ROCK internal drive, alongside MQA versions of the same file streamed from Tidal.

This used to work in that I’d add the Tidal album to the library, then set the MQA version as the primary version. Fine.

The other day, I noticed for the first time, that the local file was playing instead of the MQA file and that I couldn’t add the MQA version to the library from the iPhone app, nor remove the local album from duplicates from there. On the Mac OS version of Roon, I could add the MQA file to the library which then set it as the primary version, but back on the iPhone I usually use as a remote, the local file still persisted as the one playing, and the one set as primary.

In the end I had to resort to deleting the local file, in which case the MQA from Tidal stayed as the primary version, and played OK.

Today, searching for a different album with the same setup, I can see both albums in the search results. The local file sets itself as the primary, despite my having previously set the Tidal MQA as primary, in this case, if I select the MQA version, the local file disappears completely as an option under the ‘versions’ tab, but still appears as a separate album under search results.

This seems odd/buggy behaviour all round. I don’t really want to have to physically delete/remove local files to de-dup, or prefer the Tidal MQA - for one thing, it’s useful to demo MQA to friends, etc.

As part of troubleshooting have you rebooted everything?

Yes, everything has been rebooted.

Here are some screenshots corresponding to the above, hope they make sense out of context, let me know if you need anything further - 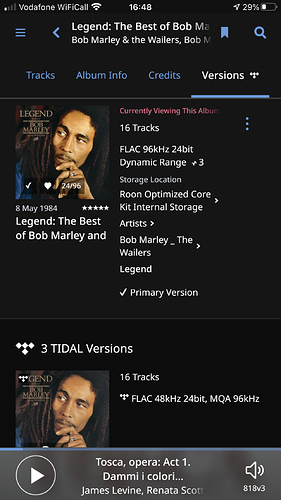 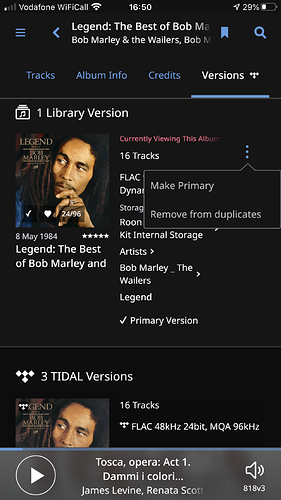 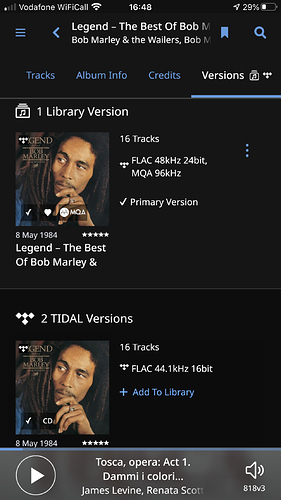 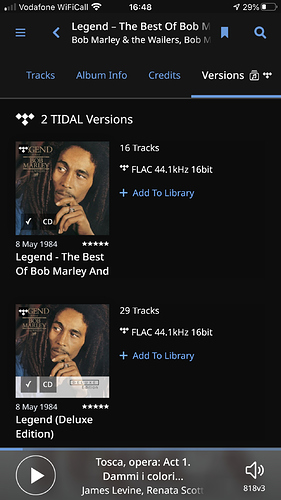 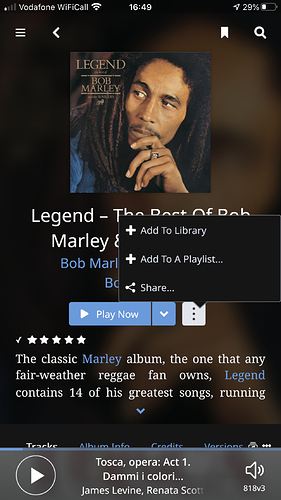 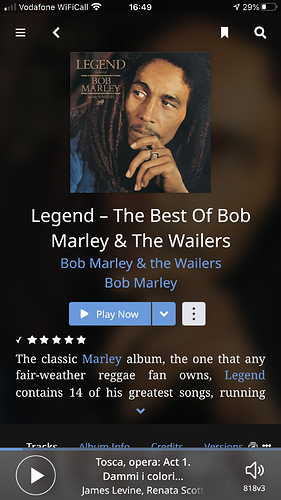 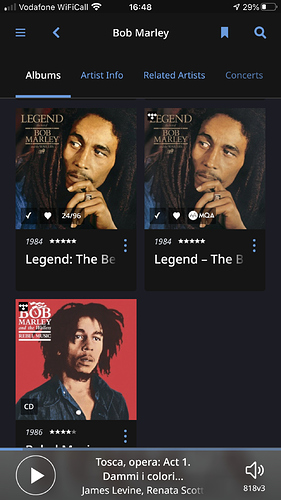 It’s difficult to represent what’s going on because, as I mentioned above, the albums which show, and which are in the library/primary version, or not, change according to which I have selected at the time. To me, this is not correct behaviour -

Many thanks for your help,

Thanks, @ScreenMachine. I’ll pass this along to the team for further investigation.

Just for a bit of extra info, I noticed today that this odd behaviour does not occur if both tracks in question originate on Tidal - I am able to manipulate those in ways I would consider normal in terms of the above. So it seems specific to local files/Tidal/Tidal MQA in some way.

Just some new behaviour to report - now I can’t add a new MQA album from Tidal to my library at all using Roon on my iPhone.

And even more weird new behaviour with Tidal/MQA tonight. Tried to play André Previn / Pittsburgh Symphony Orchestra / Gershwin: Rhapsody in Blue / An American in Paris / Piano Concerto in F / Phillips label, which was showing up as MQA on Tidal.

Then noticed that when I hit play on An American In Paris, Roon was actually playing a different version - a Classic FM branded non-MQA version.

I made several attempts to play the MQA version, but Roon persisted in playing the non-MQA album.

This was resolved only by adding the MQA, Phillips album to my library and it played the MQA version correctly.

And yes in this case my iPhone remote could add the MQA album.

Guys, what’s going on? I never had any of these issues until recently, something feels very broken here.

Any progress on this, please? Still persisting here…

Tidal user in the US, just pulled up the album ( no local copy ) and am playing it via Roon now. It’s playing the correct tracks from the album in MQA.

Not sure this helps you but it appears that now Roon is playing the selected album and not another version.

Using Roon on Windows 10 laptop to search and control core.

I’m afraid not, I have the same random behaviour persisting, as described in the posts above. Sometimes I can get Roon to play the MQA version, sometimes it decides it will play the red-book version, whether I have the album locally or whether there are just two Tidal versions. Sometimes it will allow me to add an MQA album to my library if no existing copy is there locally or on Tidal. Still different behaviour on the iPhone remote to the Mac OS remote. Very strange indeed.