Hi @Henry_McLeod
As the owner of a 20,000 album library, I’m aware of the “personal preference” involved in buying that library and the time and effort involved

I agree with pretty much every word.

Well there are 1,458 MQA albums listed on the Google spreadsheet on this site…and at the rate at which people are finding them, I’m sure there is more to come

Well there are 1,458 MQA albums listed on the Google spreadsheet on this site…and at the rate at which people are finding them, I’m sure there is more to come

As am I…and as is the Spreadsheet…there are near enough to 1,500 MQA Albums available for streaming thru Tidal

As am I…and as is the Spreadsheet…there are near enough to 1,500 MQA Albums available for streaming thru Tidal

There are less than 500 albums as we speak now in Tidal streaming, where you get this figures from? Don’t get confuse from tracks to albums, they are different.

I repeat…there are ~1,500 MQA albums available for streaming thru Tidal…as detailed in the Google Spreadsheet linked and referenced many times on this Roon forum

I repeat…there are ~1,500 MQA albums available for streaming thru Tidal…as detailed in the Google Spreadsheet linked and referenced many times on this Roon forum

Yes, @Ronnie, I counted myself… I got Auralic DS Lightning app, it has a section called ‘Masters’, not more than 500 albums as we speak… 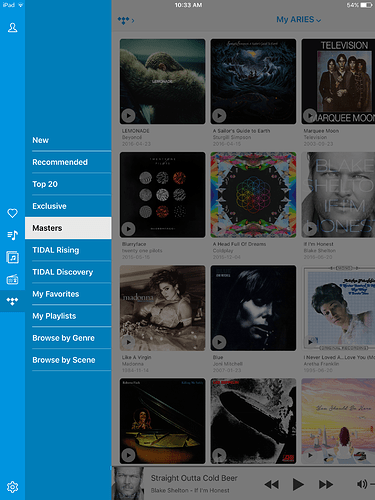 It shows approx. 1450 titles found so far on Tidal.

The Masters can be played using the Tidal desktop app for Windows or Mac. 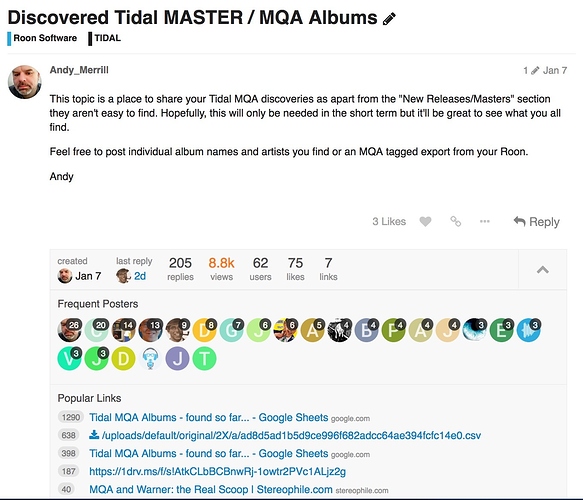 I’m just counter checking my apps reported that there’s less than 500 albums… There’s seemed to be a large discrepancy here.

Yeah. The Tidal app isn’t set up to search for MQA Masters. Argh.

Thats why the spreadsheet Andy Merrill started is so awesome. It gives us a resource to easily (a bit more easily) find MQA titles in Tidal.

I hope it’s not that Usa tidal access is perhaps unrestricted and other countries is showing less as there are things being restricted. That would be a big issue.

Ah… that may explain why.

The reason people are frustrated is because we picked up on this weeks ago.

The ‘Masters’ section on Tidal only shows some featured albums. The rest are scattered throughout the catalog, not identified in any way. The only way to tell if a particular album is in master / MQA format is to start playing it - if "Master"shows upon the bottom right-hand corner, voilà! You’ve found one.

We’ve been keeping track of all the titles users have found in the Google spreadsheet linked above.

The ‘renderer’ looks interesting to me. if Roon, for some reasons not able to do a full software decode, then a partial decode followed by ‘renderer’ resulted in a full decode. If they sell the ‘renderer’ as a plug-in dongles to their existing USB-DACs, it can achieve a full decoding together with Roon.

This solution is good in one sense that people don’t need to upgrade their existing USB-DACs, I think in some way, this will please a lot of people out there.

This is an interesting idea but I bet it’s not a serious option they are considering. I’m not aware of any inherent limitation that would preclude all of the MQA decoding to happen in software and since rendering does not appear to be a computationally intensive function I suspect it can be done just fine from the computer. What’s missing in this approach is how to account for the specific DAC “corrections.” One way to do this in software is if MQA allows “profiles” for various DACs to be made available to use in software like Roon–a feature that isn’t consistent with the business model MQA has been advertising so far. Then again, originally there wasn’t going to be any software decoding at all and now we have Tidal and soon Roon doing it so…there is still hope.

I’ve removed the debate about streaming/purchase and rental/owning to its own thread and moderated some posts to reduce the flammability of this thread.

Please try to keep a friendly atmosphere here when discussing MQA. I appreciate that it can be frustrating when there is information scattered over the Forum but it ought to be possible for information to be equalised without people taking offence.

Rendering is a serious Idea and they already have it agreed on the Dragonfly. If they allow the paid for software providers to do a partial decode then enable rendering in a DAC to do the rest they have stuck to their end to end model. It may be a less complex way for existing hardware and newer budget DACs to enter the MQA ecosystem. The key is the number of software providers who can pay to include MQA. JRiver, Audirvana, Roon all charge their users and Tidal has no free tier so they are closed systems that suit the MQA model.

You assume that the licence fee for hardware and software decoding is significant. That is an assumption.

I understood from my own conversations with people who know about this that the emphasis on the licensing model was that studios/labels would bear the majority of the costs at the encoding end of things. This was because the labels would be getting the majority of benefits. That may have changed but that is what I understood. Of course specifics of licensing and commercial arrangements will not be made public.

Hardware manufacturers would only get incremental at best (if there was an uplift in unit sales) and software is low cost to start with.

So, to me it made sense as it meant that the hurdle to implement decoding was deliberately low.

That Tidal has no free tier isn’t an issue here. IMHO no music streamers should be free. I don’t like the advertisement business model.