MQA with a non MQA DAC connected to Node 2i

I have Denafrips Ares II attached to the Coax out of my Node 2i. When I play MQA songs from Tidal it seems that the Node 2i does the MQA Rendering before it sends it to my Ares II DAC that is not a MQA DAC.

Does this mean that I get the full MQA “experience” as the Roon Core does the first MQA rendering and then it seems Node 2i does the second unfolding before it sends it the my Ares II?

I attached the pictures of my Roon signal flow. 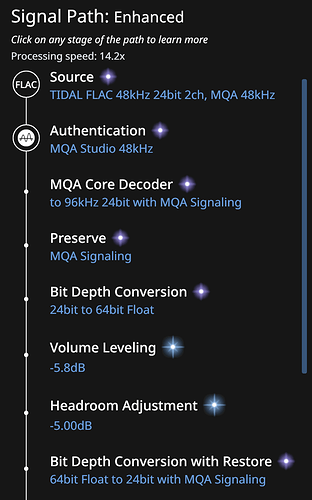 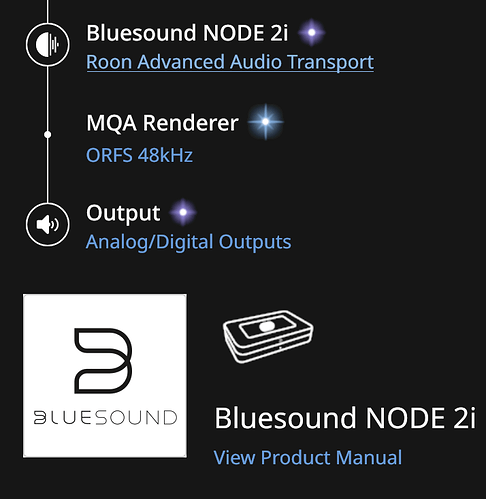 This looks to me like it is reporting what the node analog output is doing. Roon is not aware of your final DAC and so you are not getting full MQA, just the first unfold. (Unless your DAC is MQA aware)
You could try the Node analog output and compare to see which you prefer.

I have compared the Node 2i analog output and the Coax out to Ares II and the Ares II sounds way better.

That is a much higher quality DAC then. It would be interesting to compare with a similar quality MQA DAC

Node 2i does the second unfolding before it sends it the my Ares II?

MQA rendering applies to analog output only. You only get MQA Core 88.2kHz or 96kHz from SPDIF output in a certified MQA product.

The signal path is unable to represent both cases at the same time.

So, as I am not using the analog outputs at all in Node 2i (just the COAX out to the Ares II DAC), I should configure Node 2i hardware setting in Roon to “No MQA support”, Right?

I am basically using the Node 2i just as Roon Bridge.

Yes, although it should not make much difference in your use case.

…except I get more “truthful” signal path information in Roon like that.