In the Roon app, both desktop and mobile, you can select the disc number in multi disc sets : 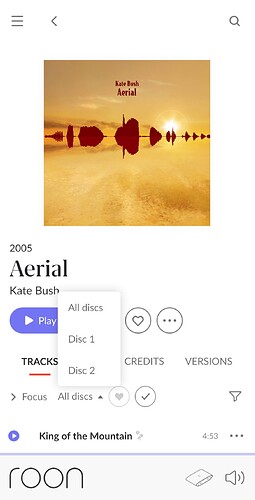 It would be great if this option was also available in ARC. As of now, there is no mention of the track or disc number. 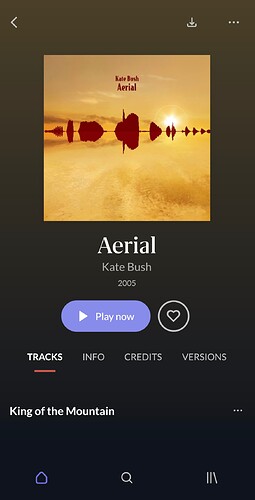 This would be nice but I’m out of votes

For context, these are related:

Can I just confirm that it is on purpose that track numbers are not visible anywhere in ARC, and is this a deliberate thing or has it for some reason just been overlooked and will they be added, there is no point in continuing to use it if the this has been done on purpose and they will never be added.

(Nothing but the first post in the following one)

Multi-disc records appear as a single one in Arc, while in Roon you can scroll/select by disc number. It would be great if this functionality would be the same in Arc as in Roon.

The track number situation is not exclusive to ARC. The standard Roon app doesn’t have them either on iPhone. I agree it would be a nice feature to add, but I understand that screen real estate is rare on mobile. Also, track numbers for large box set doesn’t mean very much.

I saw the other post you mention, concerning multi-disc appearing as one in ARC, but I wanted to make a “formal” suggestion out of it.

I’m happy that you created the formal one, I just had the other ones in mind and I don’t like losing context (it’s a work habit…), so that was the reason to link them - if only for the benefit of information flow to the other threads

Indeed the track numbers are the same issue in the regular remote and I don’t understand why we can’t have them as an option. They existed up to Roon 1.7 and were removed with 1.8, and I never saw a statement if this was an oversight/bug or on purpose. Real estate is limited, but depending on the scenario I might prefer track numbers over seeing the whole title, for instance