Multi-disc sets split up on import?

I have started to merge albums to get over all the errors on multi-disc releases in Roon’s awful meta data for classical music.

Although I intend to use nothing other than Roon, I do not want to spend any time making changes to a proprietary format.

Can someone please explain what happens when you are making amendments in Roon?

As a side note I am incredibly annoyed any of this is necessary since my tags are perfect but the way Roon reads it messes it up. J River shows it perfectly by contrast.

Can someone please explain what happens when you are making amendments in Roon?

Roon does not modify your files in any way, other than if you choose to delete the files from inside Roon.

As a side note I am incredibly annoyed any of this is necessary since my tags are perfect but the way Roon reads it messes it up.

Have you read this article? I’m guessing something about your tags or folder structure is making Roon think these are separate albums, but let us know your files appear to adhere to those guidelines and we can take a look.

Thanks. I am now going to trial this. How do I remove an album from Roon without deleting it entirely? I can’t seem to see the option

In any event, the Beethoven example above is what it is like in the miles davis article too, so I dont understand why that isnt working anyway

And this will work just as well:

Yeah, this is the problem – Roon will assume you want these imported as separate albums, since they aren’t stored in a way that indicates the albums belong together.

There are a few ways to get this right, the most obvious being:

You could also try this format:


But this isn't going to work:[quote="DelPrado, post:4, topic:23908"] I just moved everything into a single directory [/quote]
We've made a lot of progress on Classical music, but there's absolutely still work for us to do. That said, we have incredibly rich data about the Beethoven symphonies in your screenshots, but you're not going to see any of it if we can't identify the content.

The vast majority of multi-disc sets are identified by Roon without any need to manually group the discs together – this leads directly to good identifications, which leads to good metadata in Roon. Unfortunately, if your files are stored in a way that Roon can’t understand, you’re not going to get good results.

Thanks Mike. What is the difference between:

They both have subfolder cds under a parent folder?

But, on the other hand, there is also the metadata tags. Folder structure is not everything

The question to ask yourself when tagging and structuring is perhaps: how would Roon know?

Well, so much for a long, non-authoritative, rambling answer

Therefore, to be highly specific, and to give a concrete example, I rip as follows:

What exactly do I need to change that too so Roon can read it?

Sorry @DelPrado, I just talk from a long experience with how computers and organisation works. I do not dare to give direct advice on Roon - since I am a newbie specifically on Roon. Perhaps someone with more Roon experience can answer this

That would bring all files into one album.

According to Mikes example Christian - that is not necessary. And for my undesirable as I have ripped thousands of cds according to EAC best practice which does not include embedding cd number in the filename

But not needed, because you have the CDs stored one CD per folder…

Yip, but handy nonetheless if you decide to simplify folder structure.

Thanks Mike. What is the difference between:

They both have subfolder cds under a parent folder?

My assumption was that the /Beethoven Symphonies folder contained many albums – if that’s correct, and you have multiple CD1 folders at the same level, its going to be much more difficult for Roon to group these folders into proper multi-disc albums that can be identified.

On the other hand, if the /Beethoven Symphonies folder only contains a single album, then CD1 and CD2folders are fine.

It might be easier for me to understand what’s going on here with the media in front of me @DelPrado. Do you have Dropbox (or similar) that you can use to send me a multi-disc album that’s not being imported correctly?

Did you get my PM? This sounds like a great idea, I just need to share with you some details of my virtual server

Did you get my PM?

Hey @DelPrado – I took a quick look at the media here and I’m not sure there’s much we can do. Roon uses a pretty finely-tuned process to make sense of both file tags and folder structure and group discs into albums. At least for the content you sent I don’t think either is consistent enough to give good results automatically.

Neither album you sent has folders called Disc 1, Disc 2, etc. I don’t believe we currently recognize folders called Vol1, Vol2 but I can check – my guess is that that convention is more commonly associated with distinct albums, and we probably got complaints that we were merging multiple distinct albums into a single multi-disc set (ie, the opposite of what you’re looking for). If you change the folder names to the Disc 1 conventions I mentioned, this will probably work.

Additionally, these files don’t appear to have consistent disc number tags (also called media number). You can see here on this track from disc 3: 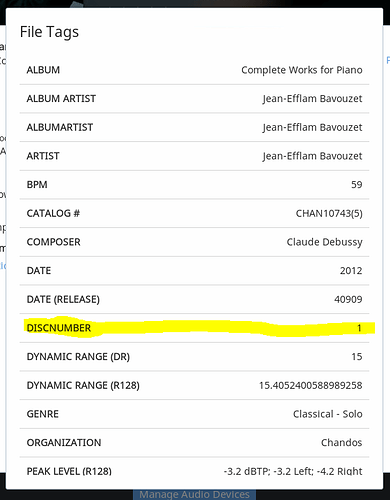 Unfortunately, without consistent folder names or disc number tags, Roon isn’t going to be able to automatically group these sets into discs. You can group them in a few clicks in Roon, or you can update your files to a more conventional format, and then rescan.

Let me know if that makes sense @DelPrado!

Thanks. I will look into this. What tag editor do you recommend? I can’t seem to edit the disc number on mp3tag