Wondering how Roon determines that an album has more than one disc. Most often it does not - and simply shows each disc in a set as a separate album. I have tried my best to be uniform in my directory structure with sub-directories for each disc in a multi-disc set. Sometimes Roon accurately determines that it is dealing with a multi-disc set, but most of the time it does not. Sometimes it will go half way. For example, I’m now looking at a 3-disc set and Roon has lumped discs 1 and 3 together under the same album, showing those two discs separately under the “Tracks” heading, but omitting Disc 2. Disc 2 can be found as a separate album. All of these discs have the same album name, but have separate disc tags - “1,” “2,” and “3.”

Do you have the discnumber tag set for each disc?

Sometimes when I dont have that tag set correctly, Roon will still identify the various discs and correctly match the songs but most of the time, Roon incorrectly matches the songs even though I have the right song title. It seems Roon puts a higher priority on song duration than it does on song title in the tags so if your song duration is different than what Roon has in its database then more often than not, the tracks will not be matched correctly.

Always use MP3Tag and the discs are always tagged by number, yes.

Curious, when you edit the album and select the Fix Track Grouping, do you see the correct disc # for each track in the list on the right? What do you see when you select and track and look at the tag data?

If you check out this thread, you will see my experiences when Roon does not identify the disc # even though the correct information is in the tag.

I noticed that sometimes (not always) that my unidentified albums do not show the disk #. I have verified that Roon sees, I have set the preference to file media #, I have rescanned and re-analyzed the album but without luck. I’ve also done a full library rescan. I dont understand why sometimes Roon will recognize the disk # and group the tracks accordingly while other times it will completely ignore it no matter what I do. Any ideas?

I just started using Roon and had a couple of box sets that were not showing correctly from some combination of missing or incorrect discnumber and tracknumber fields, and messed up folder structure from differences in allowed characters in filenames. For example, one of the box sets is an HD download from Nonesuch that had correct discnumber tags but missing disctotal and tracktotal tags, and consecutive tracknumber tags through the whole box set. Once I corrected the data manually with Metadatics (Mac app), Roon did the rest perfectly.

I hadn’t set disctotal, so I did so just now. I have no idea what the original track numbers were, so I just used MP3Tag’s autonumbering - each disc has tracks numbered consecutively starting at 1 (no leading zero). Didn’t help, unfortunately. Something seems to be very picky here, and I’m not certain what it is.

Have you read this?

I’ve used Song Kong and Jaikoz for years now, and they don’t always recognize the song as coming from the particular album I have ripped. Accordingly, these tagging programs will insert different track numbers (also different album names and disc numbers - but I “catch” those before adding the tagged files to my music collection).

I now see how to use Roon manually to merge these into one album, and that works fine. However, I have quite a few of these. Can this procedure be done in a batch or automatically?

Here’s an example of an album and the directory structure in my library. I didn’t concern myself with the file tags, just the structure. Roon successfully identified it. 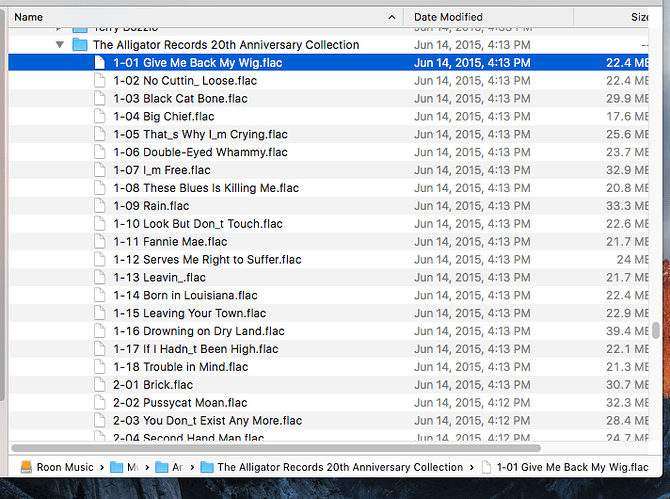 So, no CD wasn’t necessary.

Here’s an example of an album and the directory structure in my library.

This works for me as well. However, occasionally Roon will still lump them as one disc if it only has a single disc version in its database. It is easily fixed by preferring file disc and track numbers.

I haven’t used Roon’s tag editing feature. Long before I subscribed to Roon I used (and still use) Jaikoz, Song Kong, and MP3 Tag. I have also used Bliss. I am able to use the right mouse button and select multiple albums and then merge them. However, I’m certain I have over 1,000 multi-disc sets, and this procedure will be quite tedious.

I see your thread discloses the same experiences as I have had. I wonder if anyone at Roon is exploring ways to resolve the issue…