I have ripped thousands of these types of discs with very few problems. In the very few cases where problems have occurred, I have been able to solve them. However, in this case, several hours of effort have been in vain.

As a test, I ripped another multi-part composition disc and that also did not work properly.

The result is that the Composition does not display properly. In the Track listing, the work title should display in a heading with each part/movement underneath. Also, when one goes into the Composition, it lists each movement as a separate recording.

I have tried everything that I can thing of including re-ripping and retagging and I have rebooted my Nucleus Plus a couple of times. I have not changed any of the settings. The Multi-part Composition Grouping option under Album edit does not give me any useful options and defaults to “prefer Roon”. Under import settings I have always had the multi/part grouping set to “File” as a preference. Also, unidentifying the album does not made any difference.

In the past few days, I did migrate to a new computer but that should make no difference as my media files are attached to the Nucleus Plus and that hasn’t changed.

I hope a solution can be found to this problem. It is EXTREMELY annoying. 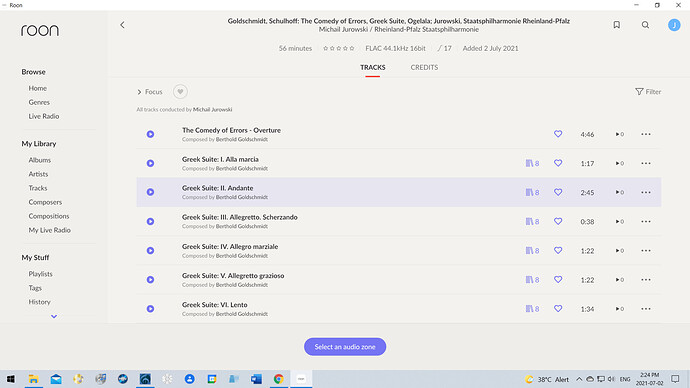 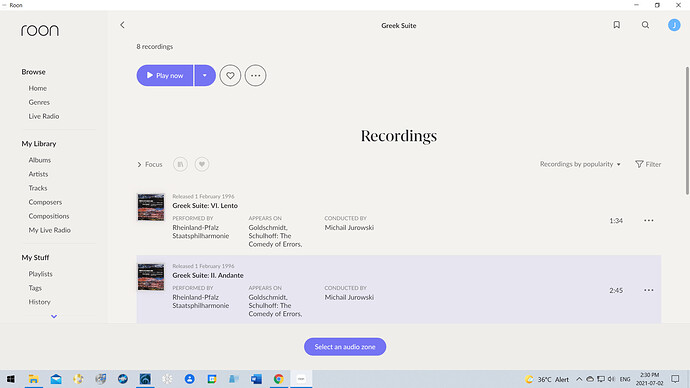 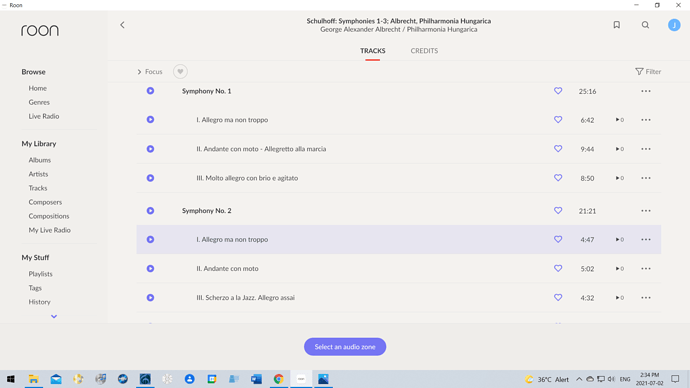 This should probably be moved to Roon Support. Can someone do this for me?

Hi Jim,
This is probably due to a metadata provider issue and unless you contact the metadata provider (or submit a correction), there is not much Roon can do differently. It happens often with boxsets or classical recordings as they are often repackaged in slightly different reissues and usually only the most popular have proper data in AMG or Musicbrainz. This may be corrected in future if you are dealing with a recent release.

If you are willing to tag your metadata, there is a solution by using a metadata editor like MP3Tag or dbpoweramp (MP3Tag provides more flexibilty and the ability to create routines -like macros- to simplify the process).

Once you have done this Roon will then display all the movements as part of the work and identify the composition and its movements correctly if you specify in your general or album setting to prefer file to Roon metadata. If Roon can identify the disc correctly this is of course not necessary.

Note that unlike in the title tag, you do not need to include a “:” at the end of the composition or section names in the 3 tags above as with the extra information thus added Roon does not need to try and identify the various elements of the track.

See my more detailed guide with MP3Tag screenshots by searching post 5 of “ Performer/Composer segmentation in Roon 1.8”

@Jim_Ridgway - I’ve moved your post into the Support > Metadata Issues category of the forum.

It is true that there is no roon available metadata for the Goldschmidt/Schultorp album. While it is listed at allmusic, there isn’t even a track list there much less performance data. The album isn’t listed at all in musicbrainz. However, a listing for it is in discogs. The album is fairly old, having been released in 1995. In my experience, the label, CPO, has often had spotty metadata

Thank you for all your responses and comments.

A special thanks goes to Happycy. Although I would consider myself to be a sophisticated power user/tagger, from his posts I learned a few things and gained a different perspective. More importantly, to my surprise, delight, and amazement these posts indirectly have given me the impetus and the inspiration to find the ultimate solution.

First, I should out mention my setup before I outline the solution. I am doing this so that anyone with a similar setup can hopefully avoid the hassle that I had.

Although I have used MP3Tag previously, my tagger is the marvellous MusiChi program. This program is wonderful for tagging any genre but really excels with Classical Music and Soundtracks (both genres often feature multi-part compositions). Furthermore, the word processor alone is well worth the price of the program. For example, it allowed me to make my database Roon ready with relative ease. Highly recommended!

However, I digress. Once I had recovered from the record heat (40.5 C/105 F), I began to wonder what had changed with my system that had caused this problem. True, I had just migrated to a new desktop computer, but I had no issues with Roon other than this problem and I had edited several older files using MusiChi without any apparent issues. Nevertheless, something had changed.
Eventually, I got the idea using the “View File Info” option to compare tracks that I had tagged before the computer migration to the problematic tracks tagged on my new computer and outlined in the original post. After some scrutiny, I realized that there was no equivalent “Movement/Part” tag in the tags for the problematic tracks. When going through the MusiChi setting I finally remembered that 5 ½ years ago when I had first set up MusiChi, I had edited the Tag Mapping feature to cover this eventuality. For whatever reason, with this particular migration of MusiChi had not carried over the appropriate Tag Mapping (it had carried this setting over in the previous update). I changed the relevant Custom 4 field that is the suggested field for Movements or Parts to “Movement” (“Part also works by the way) which is how I had it before and it now works perfectly. Indeed, I had occasion to successfully test it this morning when I acquired 3 more classical discs containing multi-part compositions.

This solution is somewhat arcane and so I hope that it will be of assistance to others with a similar setup (I know for sure that you are out there) in order that you can avoid the hassle that I had.
I am still puzzled that the MusiChi Tag Mapping setting did not carry over properly. I suppose that the moral of the story is to thoroughly check the update to make sure that the desired settings are all retained. Roon is certainly not immune to this problem as I noticed that while going through my settings, it had changed several of my General Settings with the most recent update (e.g. “Show track numbers” and “Customize album display” to name a few). I think that a screen print of these settings is now definitely in order.

Thank you again everyone.

MusiCHI is indeed great for tagging , its shame its not actively sold anymore, Phillipe seems to have moved onto hardware. (you can still but it via sales@musichi.eu I believe)

MusiCHI doesn’t support [Movement] natively , as you found you must set a Custom Tag = [Movement] with an external tag editor (I use JRiver MC) before you can map toit . [Composition] maps automatically (as its a native tag in MusiCHI) as long as spelling matches . Once that mapping is done you can see [Movement] to edit. I haven’t changed PC for a number of years but it wouldn’t surprise me if that mapping config is not saved across PC changes.

This is my work flow for new Classical rips, Firstly I have a working (“unwatched”) folder where I “manipulate” albums.

I use MusiCHI to MusiClean where it works and then split [Name] to [Movement] with the Text Processor. I also convert the Composer back to a Roon friendly format (Roon does not recognize the MusiCHI format Beethoven, Ludwig van (BornDate, DeathDate) ie Ludwig van Beethoven or simply Beethoven

I all but very “Obscure” albums this works. You will find normally if Roon ID’s the album much of this is unnecessary. I do it mainly to keep my Legacy system in line where Composition & Movement are a manual operation.

The main issues are where an Album is a previous vinyl release which has been “augmented” with addition tracks.

As you note Roon is OK with either Composition or Work and Movement or Part. Also don’t overlook the Section tag which allows for things like Act 1 etc in operas

Hope this helps both you and others , I have had a while “straightening” tags for Roon’s consumption

Thanks for the note.

My MusiChi workflow is almost identical. What I do with the composer is copy the MusiChi entry into
Custom [field] 5 and go from there. When I first made my database Roon Ready, the MusiChi word processor was an absolute godsend and saved me countless hours of work.

I believe that Philippe (the developer and a really good guy) is going to still do a bit of minor maintenance on the program (i.e. tweak the composer databases and update the performers database. Indeed there is already an update to that effect.

Personally, I am very happy with MusiChi as it is. As long as it keeps functioning, all is well.