Hello, Support. I have a 6-disk album. Disks 1 and 2 were automatically multi grouped, while the other 4 were not. I like multi grouping, especially on classical albums. How can I multi group the disks that were not? 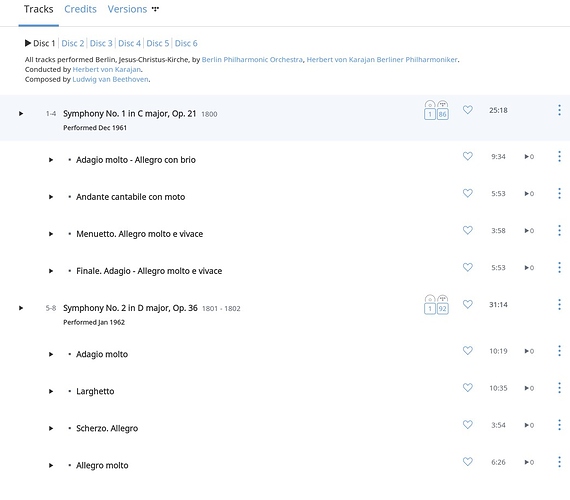 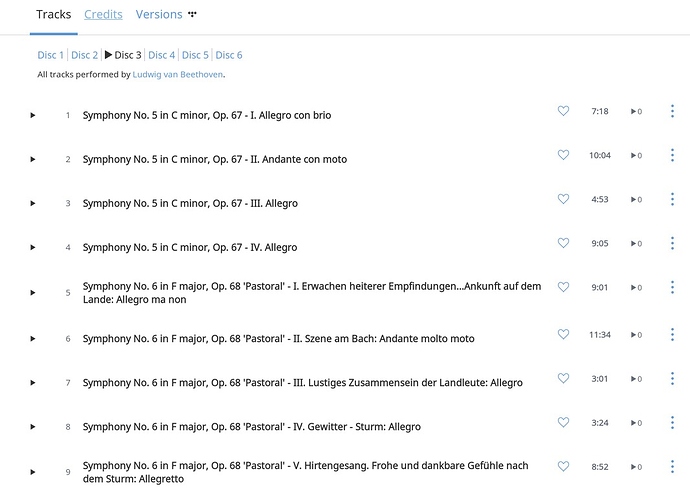 That looks like an incomplete identification. Have you tried manually reidentifying? What does Roon offer?

I have tried re-identifying the album a few times. Didn’t change anything.

Can you confirm what album this is for us?

Can you also confirm what metadata is being used for this album by taking a screenshot of the identification wizard?

If that is the Karajan 6CD box I had a lot of trouble with it:

Had to WORK/PART everything. I’m not sure if it’s explained anywhere how to configure your tagger to do that. Herbert von Karajan and Berlin Philharmoniker look concatenated as well. Looks like the tags need a good tidy up which is what I remember as well.

That is exactly the album. Roon had trouble making sense of the disk set, so I also had to do some work to bring it all together. Mostly adding each disk separately, then merging.

So, now that we know that Roon has trouble with this album, how do I straighten it out? Or “WORK/PART everything”, as @tripleCrotchet stated.

I am MS so I use mp3tag to tag the files externally to roon. Others on Apple seem to favour Yate.

To control the hierarchy in multi-part Classical works you will need to configure your tagger of choice with custom WORK and PART tags and then tell roon to “prefer file” multi-part grouping. Several of us figured out how to do this with various taggers a while back when this was more of an issue but I don’t know if there is a HOWTO or FAQ anywhere. From the screenshots it looks like your artists may have comma delimiters instead of semi colons and that will cause the concatenation. There will likely be other issues you may want to tidy up with a good tagger as well.

Unfortunately, grooming metadata manually like this is not for everyone. There is quite a learning curve if you are not used to it. The other path of course is to get the metadata suppliers to tidy it up at source which if you have the patience is probably the best approach with core repertoir albums like this as everyone will benefit.

My experience leads me to recommend you rigorously tag everything. Roon will disappoint often in the classical realm. And trying to “fix” bad tags within Roon can be an exercise in frustration. After all, according to Roon spokespeople, “Roon is not a tagger.”

but I don’t know if there is a HOWTO or FAQ anywhere.

The File Tag Best Practice article has been updated with info on WORK PART usage.

Yes, lots of useful information there.

Unfortunately with any taggers I am familiar with, more advanced tagging features like WORK / PART are not out of the box. These are user defined custom tags in mp3tag for example. I am not familiar with Yate as I don’t have a Mac but in the discussions I saw I got the impression that WORK / PART / PERSONNEL / ENSEMBLE etc. were out of the box.

Let’s not go down the editing route yet. I took a look at the metadata for this 6-disc album, and it looks good. So, the question is what is going on? Please let the support guys work the problem here rather than everyone guessing. Thanks.

Can you share a screenshot of the identification wizard for me for this album, so we can see what metadata you’re currently using?

To get there, go to the album and choose Edit > Identify Album. It will look like this: 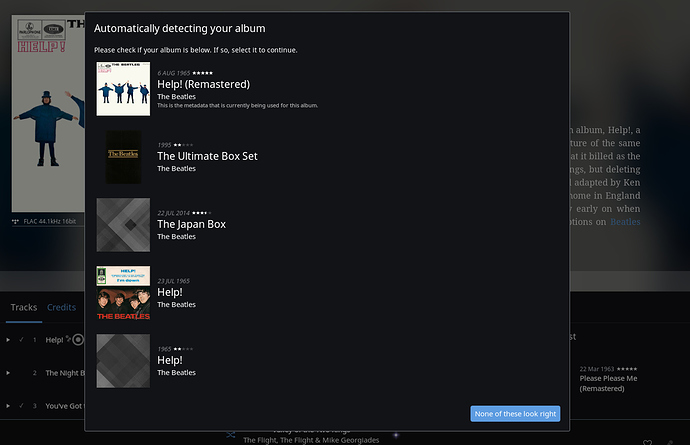 Thanks, everyone for contributing and the suggestions. This is all great info. 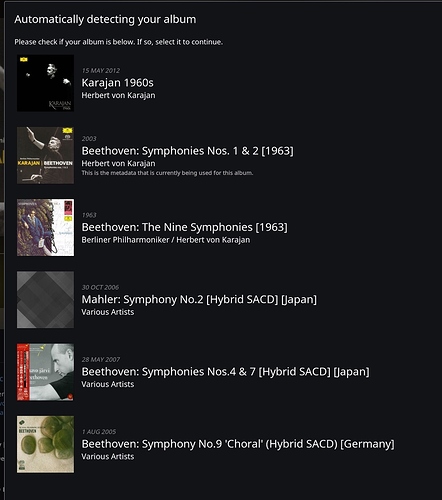 Thanks for the screenshot. Can you confirm whether you manually selected the album that this was identified as originally, or if Roon did this automatically?

To resolve this, you will need to go through the manual identification process to select the appropriate album for this metadata. Can you confirm how many tracks are in this album?

WORK / PART / PERSONNEL / ENSEMBLE etc. were out of the box.

It’s ironic that Roon invented and encouraged tagging WORK and PART for clarity’s sake. Yet if a user encourages another user to tag their stuff, the adivce from them is,

Let’s not go down the editing route yet.

All I can tell you, @xred, is that tagging your stuff doesn’t hurt, helps the vast majority of times, is a good habit to get into anyway, and is the most predictable fix I have experienced. But tagging is time consuming, and it is the antithesis of what Roon tries to offer. And it works.

I am not at home and it was a long time a go. But I think what I did was made a manual match to the next one on your screenshot which is the 5 CD “nine symphonies”. I don’t remember ever finding the 6CD version, but it was a while a go so it might have changed. From memory CD 6 is rehersals / interviews? But you may have to only manually fiddle with CD 6 in that case.

@dylan, to answer your question ("…whether you manually selected the album that this was identified as originally, or if Roon did this automatically?), some CDs Roon had identified, some I helped manually. In the end I merged the CDs into a single album, as it should be, and is the way it’s been released.

Regardless of whether automatic by Roon or manual album selection though, disks 4, 5 and 6 were not multi-grouped.

@John_V, I guess if I need to go manual route for tagging, Yate seems to be recommended for Mac, so I shall try that. Thanks for the response.

@tripleCrotchet, the album is 6 CDs, last one indeed being the Rehearsals, and if I need to do it manually, I will. A disk here or there is manageable. Thanks.

I can’t check as I am away from home. But it may save you a lot of work matching against the 5CD one. Worth a try.