Apologies if this has been asked but I couldn’t find it in any search. So I have a number of albums by King Crimson, Yes and Gentle Giant that have been re-released within the past decade with multiple versions of the album within the same release i.e. 2ch, 5.1, original mix, new mix etc. Here’s an example of one of them:

In the past, after ripping the DVD-A and converting the files to 24/96kHz flac, I’ve used MP3Tag (with Musicbrainz) to provide the metadata: it lists the entirety of the release (ie every track of the CD and DVD-A) and I just move the files up/down in the window to line up with the corresponding correct tracks to get the correct metadata. I then put the various versions into separate folders and treat them as separate albums.

However I’ve noticed this seems to cause Roon some confusion with matching up. Am I right in saying that Roon would expect me to have all the tracks (i.e. including the CD, which in this case is superflous) in the same folder for it to work? I can see that you can move the tracks up and down to match but only one-by-one, which would be a bit laborious for numerous albums!

I have albums with multiple versions like Octopus by Gentle Giant,

I would never mix different versions in the same folder, that is a recipe for causing confusion, imho. 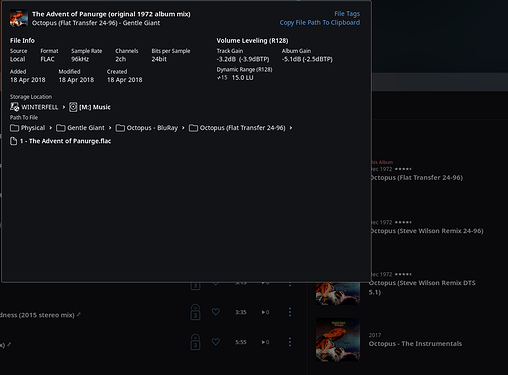 Thanks, Daniel. I’ll try organising them in that way and see how I get on

Edit - meant to say that I have that same version of Octopus, too. Love Gentle Giant - a really underrated band

seems to cause Roon some confusion with matching up

Is this at the identify stage? When there are multiple versions Roon sometimes needs a little help in choosing the right one. Have you tried re-identifying the album and choosing a better match? See this FAQ article.

Hi Brian. Yes, I can modify the version but it seems to want all individual tracks moved up and down the order (one-by-one) which isn’t practical. I’m going to try and re-organising these albums on the lines of @Rugby above and see how it goes.

I know- one of the weaknesses of editing within Roon.
Good luck.

Although this makes sense from a file structure/organisational point of view, it doesn’t seem to have helped Roon to auto-match. Part of the problem is when you cycle through the different releases, there are a number of releases that are virtually the same but for release dates a day apart. I know which versions I have but Roon doesn’t supply that info.

By way of an update for this, I experimented with numbering the tracks from Yes - Relayer in the way that Discogs et al does (rather than each version being track 1-3) and Roon still doesn’t auto-match the correct version of the album.