For some reason, one of my music storage folders is now showing as unavailable for deletion (i.e. there is no “X” against it). This seems odd as two other folders located on the same NAS do have the expected “X”.

The offending folder is shown at the top of the attached screenshot.

I have a Roon Nucleus+, a Synology NAS / diskstation for downloaded music files and a Melco music server for ripped CDs.

How can I rectify this please?

Thanks for any guidance! 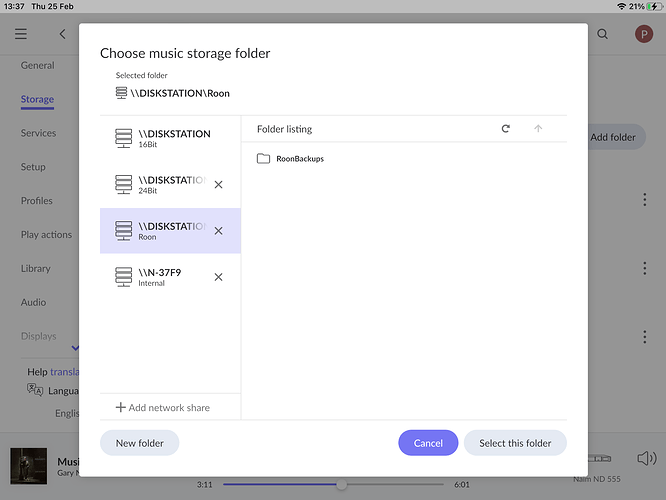 Hello @Paul_Savage1 and welcome to the forum.

As you are on the “Choose music storage folder”, are you editing an existing one? If you’re editing, I would expect that the very one that you are editing right now is not be allowed to be deleted for obvious reasons.

But this is just a guess. There isn’t enough information in your Post about what you were doing actually before took the screenshot and what your goals are.

It’s not that big a deal, I just wanted to understand why I can’t delete it.

Is there any change after a reboot of the Core machine?

If you use a different remote device, does the X appear for you?

Many thanks for the response.

I have tried re-booting my Roon Nucleus, which had no effect.

The magic “X” doesn’t appear on any remote device. I’ve tried 2 iPads, an iPhone and a Windows PC.

It’s certainly a mystery to me, although as I said in my earlier post it’s not that big a deal as it doesn’t stop me enjoying Roon and my music.