My Complaint with Allmusic (and Roon)

Clearly Steve Alaimo had no part in composing the song so why does Allmusic list him as a composer with Gregg Allman? He doesn’t even own the song so how did he get composer credit?

Sorry for the rant, but the bottom line is if Roon continues to use Allmusic metadata, I wish Allmusic would clean up their act. And I wish Roon would put some pressure on Allmusic to do so.

Also, in Wikepedia it does attribute this to Alaimo, who produced their first album. You trust Wikipedia to be correct?

Duane & Greg Allman is an album credited to Duane and Gregg Allman, released by Bold Records in May 1972. The release is essentially an album-length demo recording of the 31st of February, a Tallahassee-based folk rock band featuring drummer Butch Trucks, bassist David Brown, and guitarist Scott Boyer. The 31st of February formed in 1965 and released their first, self-titled album in 1968. This second recording, according to Trucks, was intended to be their second album. It features Duane Allm It...

Steve Alaimo, who was operating the studio where The Allman Brothers recorded this song, received a songwriting credit on this track along with Gregg Allman. Alaimo had a few Hot 100 entries as a singer in the '60s and early '70s before moving into production work.

I don’t necessarily trust Wikipedia, I simply used it for research after I noticed that none of the credits for “Eat A Peach” included Steve Alaimo. As far as I can tell “Eat A Peach” is the first recording of “Melissa” and the only composer credit given is for Gregg Allman. 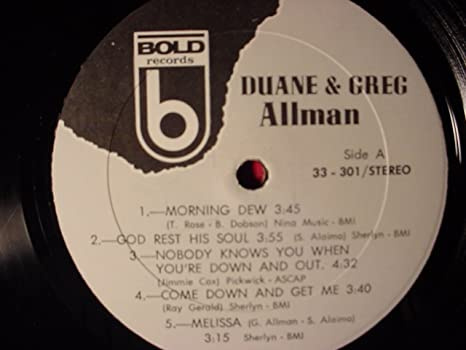 The only authority on who the official composer(s) might be is BMI. Wikipedia, Songfacts, etc. can say what they want, but the legal composers are whoever BMI says they are. (BMI in this case; in others ASCAP, SNOCAN or whatever the appropriate country agency is.) I doubt that Allman’s agent “bought the song” but may well have brought the right for Allman to perform the song, likely without royalties, but whether that gave others the right to perform the song without royalties to Alaimo is less likely. And it is not unusual for agents to demand and get composing credit; Irving Mills - who wouldn’t have had a clue what a triad was - has credit on any number of Duke Ellington compositions because as Ellington’s agent he demanded and got credit and royalties for composing. (That Mills also co-owned the publishing company that issued the compositions is yet another issue.) The history of popular music (and music in general) is rife with middlemen who took credit and royalties for songs they did not contribute to.

I think that’s why it’s known as a “first world problem”!

Metadata is important. But when it gets down to a certain level, a preoccupation with metadata minutiae smacks of OCD…

Well, the term OCD is often used (in a non-clinical) positive sense when marketing apps like this. I can’t remember if Roon uses it, but some comparable apps do. It basically translates to something like “delving into your music collection and paying attention to the smaller details” rather than any mental disorder. It’s not for everybody to fuss about the metadata or artwork for their music, but for many including me it’s part of the draw!

I have no idea who wrote the track. However, what I can say is that Wikipedia is not a reliable source. So much so, that University students cannot reference it (out here) & is mostly frowned upon in schools. It’s simply not reliable because of the ‘open’ nature of the content. That’s not to say that much of it can’t be fact, but there’s much on there that is dubious at best.

Exactly! If in doubt about metadata do your homework and wherever possible try and link information to release information from vinyl, CD etc.

Not that I am OCD or anything, but it probably isn’t acceptable to use the term OCD outside a medical context, especially pejoratively.

That one picture hanging slightly crooked on the wall. The car stereo volume left on an uneven number. Is your skin crawling yet? In these scenarios we tend to break out that little acronym that so perfectly describes those annoying little ticks:...

The article has a point and I would tend to agree, though it does depend on the context. Use of the term is so widespread within the general public that’s it’s pretty much taken on that lesser meaning. But to use the term pejoratively is different and would not be acceptable.

Metadata are important. Data are plural.

How’s that for OCD?