My Nucleus Is Crashing About Once Per Hour [Solved]

Hi Jim, the codecs are only necessary for MP3, maybe something else. Flacs should play just fine without. So, I would just let your system run for an hour and see and not worry about them yet.

It is odd that it is about an hour each time, symptoms like that make me wonder if the system is overheating and shuts down.

That’s exactly my feeling. What else would happen in one hour?

Crashed again after less than one hour. Please send me an RMA or a solution. Otherwise, I’m going to take this Nucleus out into my driveway and smash it to bits with a sledge hammer.

I moved my Nucleus into the family room so I wouldn’t have to walk so far to unplug and replug it every hour when it craps out. Maybe I’ll have better luck here. The only difference here is it’s going through two switches and about 50 feet of ethernet cable around the back of the house instead of a 6 feet ethernet cable directly into the router.

You could test the theory by adding some airflow over the Nucleus case, e.g. a fan of some kind. Like you and @Rugby I see overheating as a likely cause…

the codecs are only necessary for MP3, maybe something else

Yeah, that was always my belief until I was set straight by @danny.

As I recall, the ‘something else’ was something that would crash Roon if the codecs weren’t present. Still, for this problem codecs can probably be omitted.

Sometimes we use it for parsing out stranger tags, and if you have an aac/mp3 and the codec doesnt exist, it’ll break everything. It doesn’t hurt to install it, and leads to a complete solution.

@jim, it appears, to me, that Nucleus has heat problems that effect the M.2 drive. Maybe being fanless turns out not to be such a good idea.

But after 2 1/2 years? I also thought about the fan idea just as a test.

Where can I get the ffmpeg file?

It’s been playing for an hour. Fingers crossed.

Overheating can “develop” as a fault, with fanless units, if thermal paste deteriorates.

Just ordered some. Thanks.

You ordered some thermal paste? So, you’re going to pop the CPU fan off and add some paste? That’s going to be tricky and will definitely void any warrantee you may have left. Don’t do it.

Doubt that deteriorated paste is your problem. If the thermal paste on your CPU isn’t doing its job, it will cook the chip beyond recoverability in about 30 seconds.

Warranty is over. Maybe I won’t then. Seems like I saw a video that looked relatively simple.

It’s still playing. I wonder if unplugging the ethernet cable has any effect on anything?

So, you’re going to pop the CPU off and add some paste? That’s going to be tricky and will definitely void any warrantee you may have left. Don’t do it.

I agree that adding thermal paste shouldn’t be done unless you know what you’re doing (although there’s plenty of guidance online). I also agree that it may well not be the cause of the problem. I introduced the issue as an example of how an overheating fault can develop.

If the thermal paste under your CPU isn’t doing its job, it will cook the chip beyond recoverability in about 30 seconds.

An overheated CPU will throttle, not cook. At least in my experience. The overheating (if that’s the problem) is more likely to be related to the SSD. As far as I know the Nucleus doesn’t have a heatsink as part of its SSD set up.

It’s a shame that neither Nucleus nor ROCK permit for thermal monitoring on their web interfaces.

It’s a shame that neither Nucleus nor ROCK permit for thermal monitoring on their web interfaces.

I was just about to ask about that. As a Windows Roon user I can monitor all things thermal. I find that very useful. I’m assuming that ROCK doesn’t allow for this.

I’m assuming that ROCK doesn’t allow for this.

I think not. Roon’s argument being that this would controvert its use as an ‘appliance’…

Here my 6 passively-cooled CPU cores under the ‘stress’ of playing back and downsampling a 96/24 Qobuz file right now. Ambient temp about 34C…

If it keeps playing, I won’t do anything. Might even leave it where it is. 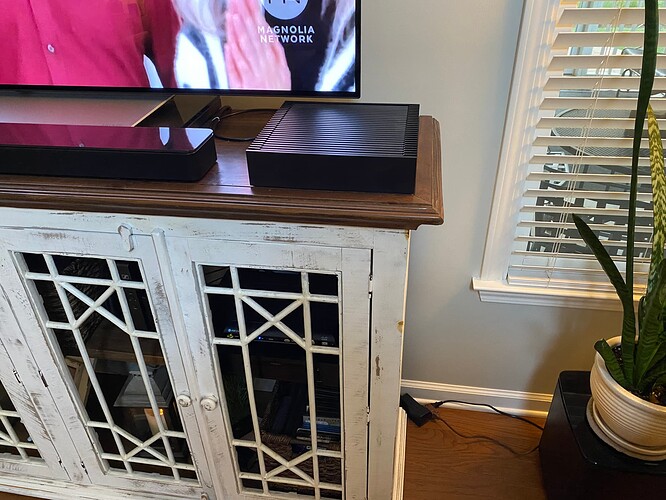 If it keeps crapping out, I would not hesitate to do the thermal paste. While I know nothing about programming, I’m not afraid to tear into just about anything.

I was able to find and install the ffmpeg file. Roon still playing OK. 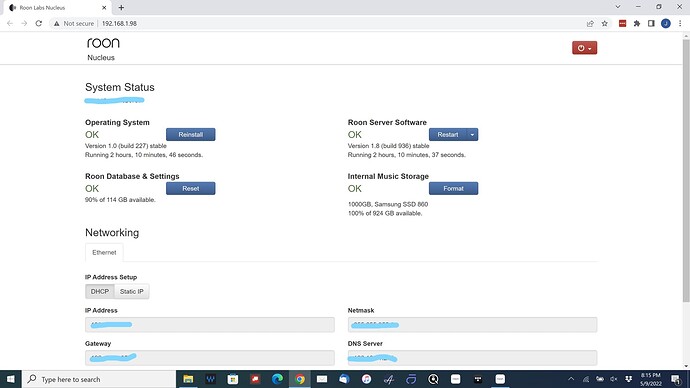 @connor will get back to you about getting logs from your unit to see what’s wrong.

However, it’s not really possible to reinstall the Nucleus software… did you do that replacement with ROCK? If so, you blew away the Nucleus-specific thermal management software and the preinstalled codecs. Unsure why you’d think it was OK to do that, but I can fix that remotely once you are up and going.

Please take this as an official statement: Do not install ROCK over your Nucleus (unless we ask you to do that) because you can destroy your unit without the Nucleus thermal management software.

What is the symptom of your crash? is it a reboot or just hang?