In the Michael Ponti Vox Box “Romantic Piano Concerto, Vol. 2,” Roon substitutes a different composition in place of the Moscheles Piano Concerto No. 3.

Here is track 1 playing. Notice that the track information is much closer below than above. Below, the composition is correct, and only the opus number is wrong. 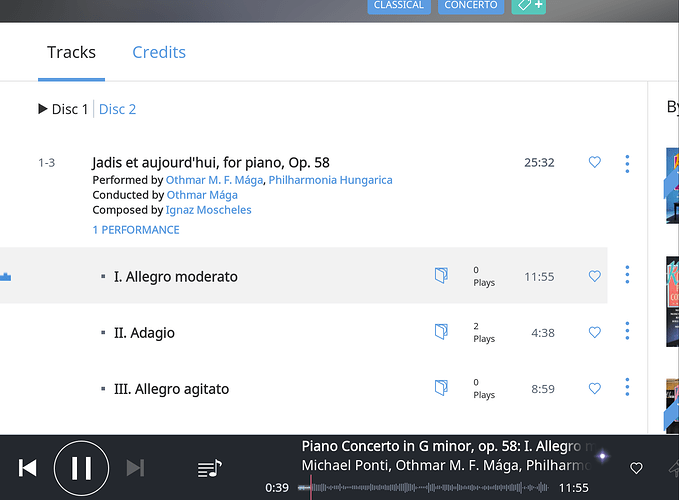 Here is a screen from the track editor. Both Roon and the file give the correct composition (though Roon has the wrong opus number), but the track list for the disk does not. 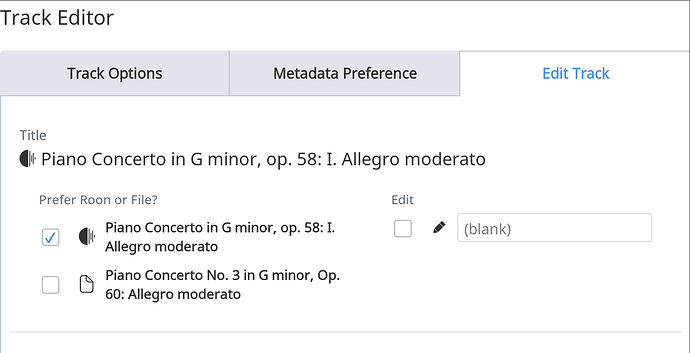 Roon ignores my request to use the file info. Is the only fix to revert to “unidentified?”

Any suggestions about this?

This is a bit complicated…

When the track is playing, you see the metadata service track titles irrespective of the composition that is listed on the album details page. This is normal.

The problem is that, according to Wikipedia:

This is a list of compositions by Ignaz Moscheles.

Op.60 - PianoConcerto No.3 in g minor (1820) (The catalogue of Moscheles complete works gives this work as Op.60, however, the score has Op.58, therefore the concerto might have been published under different opus numbers.)

What’s happening here is that, for the source metadata that is being used for your album, the Roon metadata service has taken the raw metadata titles in conjunction with the composer, parsed the Opus number (58) and applied the composition details for Opus 58 in the complete catalog.

You have a few options.

Hope that makes sense and helps you.

What’s happening here is that, for the source metadata that is being used for your album, the Roon metadata service has taken the raw metadata titles in conjunction with the composer, parsed the Opus number (58) and applied the composition details for Opus 58 in the complete catalog.

Thanks. While other sets of Roon metadata have the right composition information, the ones I saw omit the performer info. Waiting for V1.3 sounds fine to me.

But I’m still curious about where “jadis et aujourd’huis” comes from. Are you saying that Roon read the opus number from its own track info, then changed the displayed track title to something else? If so, it sounds like a bug (or at least a strange design decision).

I wouldn’t call it a bug, but a consequence of some unfortunate real world data. The reason we use Opus numbers is because we can parse them programmatically. It’s just bad luck that Opus 58 can refer to two separate compositions. The long term fix is additional work to make the Rovi and MusicBrainz editions of this album equivalent; when we achieve that (and it’s not easy without false positives elsewhere) then this will be fixed automatically.

Thanks for you patience and understanding!

I think there’s the seed of a great new feature here. If Roon could apply this procedure optionally to tracks in unidentified albums, it could save the users a lot of work.

For most classical listeners, unidentified albums contain almost exclusively compositions that are known to Roon. But ripping programs are very inconsistent. For example, Roon wants Beethoven’s 4th Piano concerto to be “Piano Concerto No. 4 in G major, Op. 58.” But the metadata from my rip will usually be different. If so, Roon won’t consider it the same composition in an unidentified album. If the procedure could be optionally applied (by track or by album), all I would need in the metadata would be the composer and Op. 58. The composition would become consistent with little or no metadata editing.