I have many DSD music files, but my new NAD C 368 intergrated amp with BluOS doesn’t support native DSD. Short of returning it, is there a workaround?

Short of letting Roon convert the files to PCM, not at the moment. There’s a bit of talk about Bluesound supporting DSD in the future, but nothing concrete at this time.

It’s a great Roon zone – I would think twice about returning it.

Hi Rene, thanks for your reply. I’ll be keeping the C 368. Do you know to which type PCM files DSD files are converted? If it will still be hi res, then I’m thinking no big deal. Also, is this conversion done on the fly?

Just out of interest: what made you choose the C368/BluOS combo over a Powernode? The amplification sections are not that different, I believe.

Hi Rene, I did consider the Node 2, but that approach would rely on the DAC built into the Marantz. And from what I’ve been able to gather, the DAC in the NAD C 368 is significantly better. Also true is that the Marantz (NR1606) isn’t as powerful as the NAD C 368. The main speakers (Merlin TSM) I’m sure will sound better with the Added power offer from the NAD C 368. So I figure I’ll take this opportunity to improve sound quality. Does that make sense?

The Powernode is basically a Node 2 with the same amplification built-in as is found in the NAD C368 (though a bit lower in power – they’re rated 60W vs 80W).

The C368 is a nifty little beast though, and the BluOS module will offer you full compatibility with Bluesound and Roon. Let us know how it works out for you!

Yes, Rene, once I saw the power of the Powernode, I dismissed it. The Merlin speakers sound better with some power behind them.

Did you try the powernode2?
It replaced my Yamaha AS1000 and have to say I’m very impressed with the powernode2. It’s “only” 60 watts x2 into 8 ohms but it sure sound great. I rarely go over 1/10th of the volume.
It drives my KEFs reference series model 103.2 with ease.

That said – I’ve toyed with one and came away impressed (as with most 2nd gen BS gear – it punches well above its price range and offers great flexibility).

The dutch brochure rates it 75 watts into 4ohms 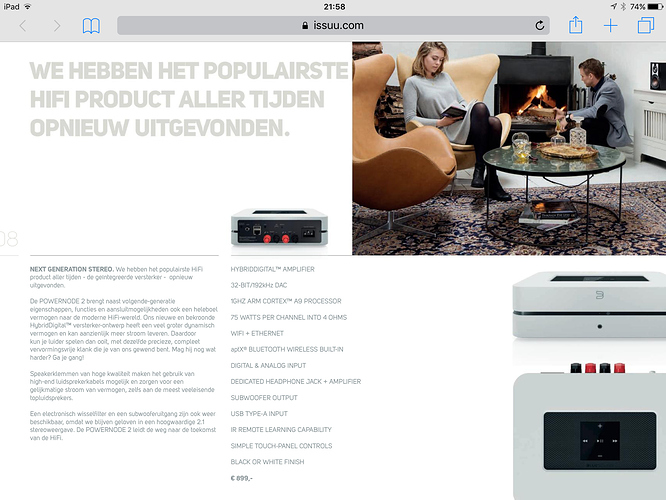 The dutch brochure rates it 75 watts into 4ohms