NAS Recommendation (Will Not Have ROCK)

Currently, our music is on a USB drive attached to NUC (i7) which contains ROCK.

I plan on buying a NAS (such as Synology, QNAP, etc) with two 4TB drives (RAID). I do not plan to move ROCK from its current location on the NUC. The NAS would be rooms away (via ethernet) attached to the router.

I then shall rip CDs and DVDs (incl BlueRay) to the NAS. Synology makes a NAS with the name “Play”.

Anyone’s recommendation for, or against, a specific NAS would be appreciated.

If that’s all you are using it for any NAS should do. I have QNAP (a legacy from my Sooloos days) but Synology make good NAS as well.

Do you need transcoding of video? How much extra do they charge for that functionality and would you use it?

The base guidelines for any RoonServer (including NAS) is for an i3 Intel processor.

Thank you. That’s why I was asking if anyone had a specific model that they preferred. Some NAS have distinctly negative reviews (largely based upon their frustration in setup or a failed unit).

I do not know to what extent I would store video on the drive(s).

As I noted: “I do not plan to move ROCK from its current location on the NUC.” It works without flaw in that location.

Can’t go wrong with Synology plus range - 218+ if you only need two bays.

Do you know the difference between 218 and 218+. QNAP has a package of two 4TB already configured.

My recommendation would be to choose a NAS with at least 3 bays. You can then choose to have a redundancy with far better chances to survice a disk crash than with 2 discs only.
The problem is: a crash will happen someday , and one never checks/replaces a disk before an actual crash.
Dirk

IIRC the plus has more powerful processor - it’ll be on Synology website. QNAP is also very good. Make sure you are getting enterprise drives, not regular desktop hard drives though.

My Synology 214play runs in Synology’s version of Raid so drives have redundancy and are hot-swappable.

Yes they do, but you can achieve a better ROI with 3 disks

As an example, with Synology, using SHR as Raid configuration, with 3 disks of 2 TB, you can have full redundancy with 4TB available for data. 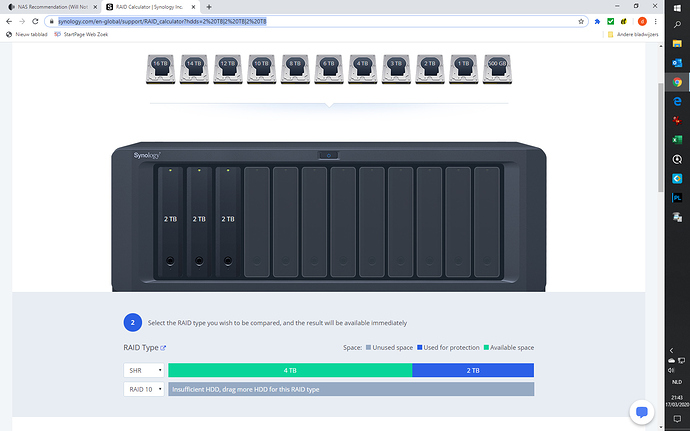 Absolutely - but also a bigger $ outlay!

Yep, absolutely true.
But I have had the case using a 2disk NAS configured in Raid 5, my 2 disks crashed at the same time (after a very long period , I believe 5-6 years) . I have learnt the hard way that a redundant NAS is not a backup. It can come close, but one should always have an extra backup, and reduce potential problems as much as one can.
Costs are a consequence of that.
Dirk

Thank you very much. There goes my plan to use floppy discs.

Totally - I also have regular backup to external HDDs. My NAS drives are about 5 years out, and I am getting nervous and am keeping a very close eye on them for bad sectors. I’ll probably replace it all at some point after the zombie apocalypse.

I have a Synology DS416play. I love it. I originally had it set up with 4X3TB drives but now switching over to 8TB drives (currently 2@3TB and 2@8TB). Setup with Synology Hybrid Raid. Even switching to new drives was dead simple, although it took a while.
It’s a real workhouse for the house. I used to use it to serve music directly to Roon but got an internal drive in the Nuc when I went to ROCK. The Synology does one version of backup and also serves as a temporary landing pad when I import new music (which I manage with JRiver).
I never had any problems using it for Roon, and I’d say it’s just a touch slower than the internal drive in the Nuc. The Nuc is just a bit snappier, but there isn’t a real lag, per se, from the NAS.

I got a great deal on a Western Digital small enterprise NAS with four bays and 8tb of storage. Think it was about £220 as an Amazon Warehouse return.

Outside of scoring a deal like that I’d go Synology also but would look for a 4 bay one.

WD Green enterprise class HDD’s for me as well. In some ways the HDD’s are more important than the enclosure as they are the bit that is likely to fail.

Remember - if you go something like RAID 5 a) you can usually only recreate the array on the host device as the different manufacturers create the array in different ways and b) if a drive fails you have to replace it with an identical drive - not just the same size but the exact same model.

For these reasons RAID is sometimes best left out of it and just use the NAS as straight storage and make sure you have a back up elsewhere.

If you’re going to be ripping video content (eg to mkv files) at blu-ray resolution and you plan to keep the rip at source quality level (ie you are not going to process with something like Handbrake), then bear in mind you can burn up disc space very rapidly. I would stay clear of a 2-bay unit if you are going to rip a lot of content, I’d be looking for a balance of capacity and redundancy.

Presumably you’ve given thought to how you are going to access the content across your network. A Pi running OSMC or LibreELEC hooked up to each of your displays can go a long way. I run a Synology 416play and it can stream to multiple local clients without breaking sweat and it also runs the MariaDB SQL database as the backend for my various Kodi clients.

Thank you. That is interesting and very helpful. Although I have an “okay” audio system and a separate video system, after reading the kindly posted NAS recommendations and watching several YouTube videos, I am concluding that my needs are not all that grand. Thus, an external USB into our NUC is sufficient. I am very certain that I am not optimally using what I have, but it is reliable, love Roon and Qobuz. Again, my many thanks.

Reliability goes a long way and if it works for you then that is all that matters. Just make sure you have at least one backup of all your media files and preferably two…

Well there is also the option of unprotected sex. Worry about it later and then lament that no one told you to back up…files.