I currently have a Drobo 5D with all my music in AIFF format using iTunes on a iMac managing the music. I have setup Roon as core on my iMAC. Via ethernet cable I would like to have my speakers (sound) played out of my Magico speakers via a Devialet Pro 220 amp/preamp. I have about 2 TB in my iTunes library so I need a NAS system just for the memory component and the connection component for my Devialet. I want to continue using my iMac as the core for Roon. Any recommendation on a NAS system and should the hard drives be SSD or standard type.

The use case you describe, could be done with any NAS. In this scenario there is no need for a high spec’d NAS. You might want to think about, if there are other services that you want to install on the NAS (now or later on).

My personal advice is, get a NAS with enough storage for your current and future music library (+other files, that you’d like to store on it).
Get one from an established brand (e.g. Synology/QNAP) as they deliver consistently (security) updates and bugfixes for a long time period.
For (gigabit) ethernet and Wifi connections an SSD might increase the transfer rate slightly, but it will run way slower than it is capable of. I’d pick NAS-compatible spinning HDD for your setup.

One addition: Is your iMac running 24/7? If you just need network access to the files on the Drobo, you could also enable file sharing on the iMac…

Thanks for the input. My iMac is on 24/7. Can I just wire the ethernet cable from my Devialet to my iMac and set the iMac to wi-Fii? Bu doing this I do not use a NAS and just keep all the music files on the Drobo 5D?

I’d recommend wiring both (Devialet and iMac) with an ethernet cable to your Router or to a network switch if this is possible.

Hello, This shit is painful. I decided to buy a TVS-471 with 3 6-TB hard drive and one 500 GB SSD drive. Have it connected to my Mac and I am lost. My goal is move all my music to the NAS and run Room from the NAS. Can you help me to make it painless thank

Have it connected to my Mac and I am lost.

Can you describe how you connected the QNAP in more detail? If you just connected it by an ethernet cable directly into your iMac, this probably won’t work as it probably won’t get an IP address. IP addresses are assigned normally by your router to every network device.

In my previous post I suggested to connect the devices to your router or to an ethernet switch in your network. Did you try that?

Could you already get past the QNAP setup process?

I have it connected to switch and got past the setup.
I have a 500 GB SSD and 3 6TB HD with 2 of them in Raid1
Its had to see how you direct where the Room will be installed and which disk the music files go.
That is my issue

You can specify the disk volume when you create a shared folder: 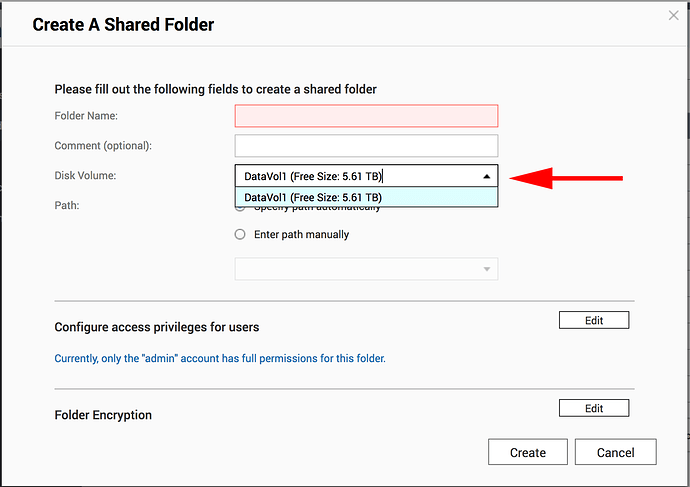 The RoonServer application files are installed on the system volume. This has no real impact on the performance of RoonServer.

OK, I made some progress with help form QNAP Tech Support. Separated my 500 GB SSD memory form the three 6 TB HHD drives one the NSA. Here are two screen shots. So tonight I am copying all my music files to the NAS HHD drive. Still having a bit of a problem migrating the Room over to the NAS. 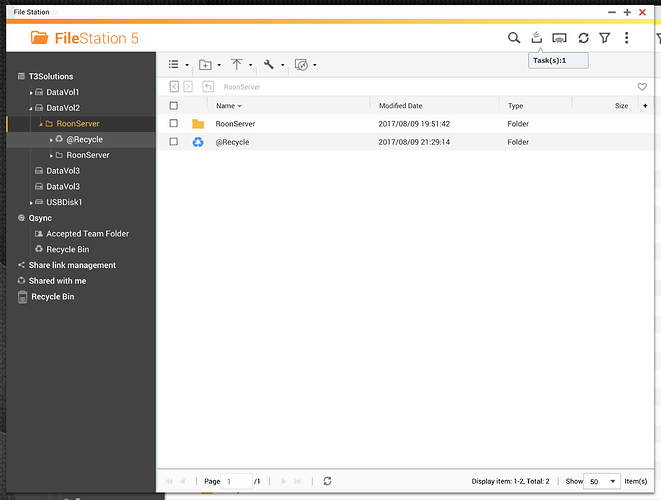 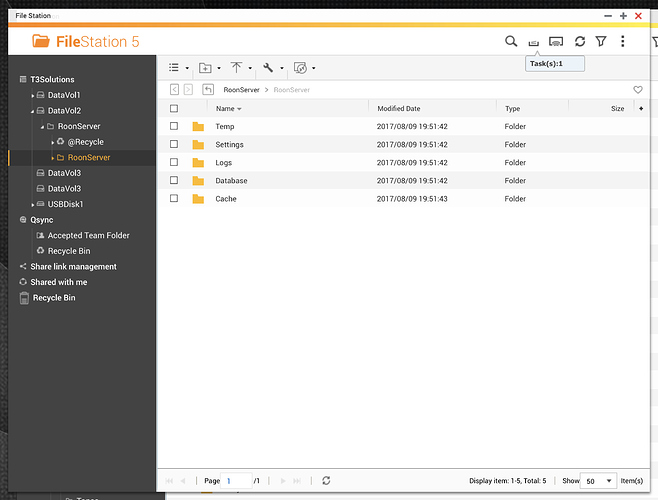 Update. Got the NAS working and figured out how to deal with the SSD and HHD drives. I have a Devialet 220 amp and it is a DAC as well. It has the ability to use Ethernet wired. If I wire the amp directly to the NAS it doesn’t work but if I wire the amp into a switch box with is directly connected. Any idea how to fix this. I would rather have the connect go directly from my Devialet to the NAS.
Thanks

Do not try to overcomplicate your setup. If it is working well when connected to your default switch or router (as it should be), I see no reason to enforce a direct connection between your Devialet and NAS.
If you have multiple ethernet ports on a device (like your QNAP) it does not mean they can be used like a power plug in your wall. They need to be configured with a static IP address or set to work as a network bridge.