I found missing info in the page of the artist Neal Morse (https://www.allmusic.com/artist/neal-morse-mn0000323999). 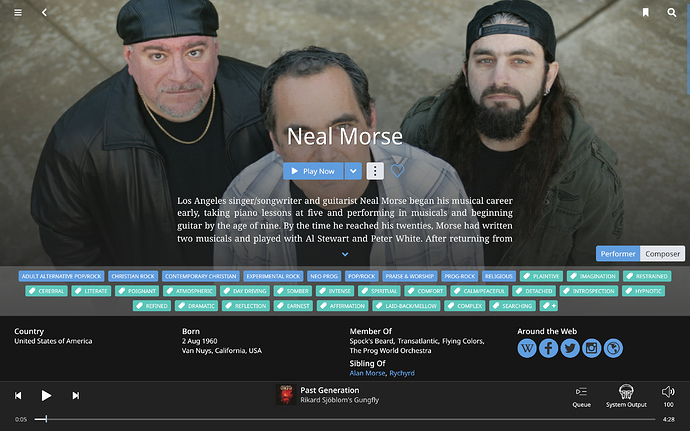 Member of
The Neal Morse Band (https://www.allmusic.com/artist/the-neal-morse-band-mn0003557367) is missing.

Can you @support fix this? It’ll be awesome.
Thank you! 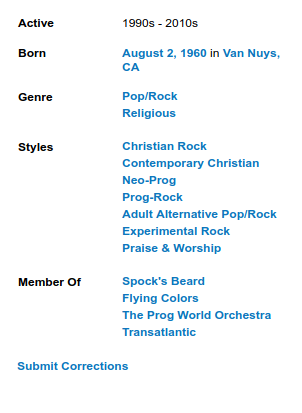 Please use the “Submit Corrections” link there.

I already submitted corrections to AllMusic, more than one time, in the past months and during last year (I contributed with bands, genres, photos, tracklists…).

They always accepted my submission but in late November they wrote to me that they cannot accept my submissions anymore because I do not represent the artist and that for a legal reason they will delete my requests.

For this reason a week ago I requested right here in Roon forum a correction to the page of Mike Portnoy, and it is already effective, so I thought that submitting through Roon would be better.

Any idea of what happened @BlackJack and @support ?

I surely don’t know. I’m just another user (spending too much time here on the forum). As your request seemd to be a complaint about AllMusic’s metadata, I just tried to be helpful by pointing out that the support team proposed to submit corrections directly to AllMusic.

By taking a closer look at this case, it seems you’re just making claims but miss to provide any evidence that would justify that changes be made at all.

Member of
The Neal Morse Band https://www.allmusic.com/artist/the-neal-morse-band-mn0003557367 is missing. 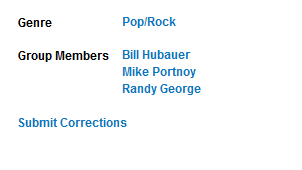 Because he is not listed as a Group member. Where is the evidence that he should be? 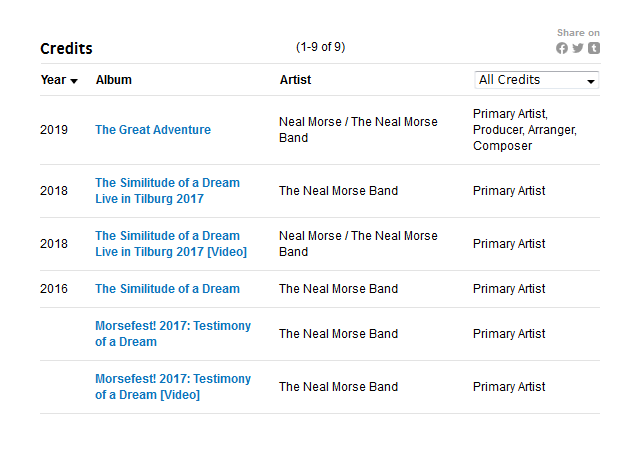 Genres and Styles usually don’t exist in a vacuum. They come attached to a work/album/release. Where to add which of the ones you request? There can be endless discussions about genres/styles anyways. So someone who’s trustworthy (by AllMusic, because it’s their metadata) has to rehear the works of Neal Morse and judge if your requested changes can/should be made to any/parts (which ones) of his work?

As AllMusic is selling the metadata they must have at least some basic trust in their metadata and those who provide them. So I guess they won’t just make changes without any proof that the metadata they provide right know is wrong – even if the request should get relayed through the team at Roon Labs LLC.