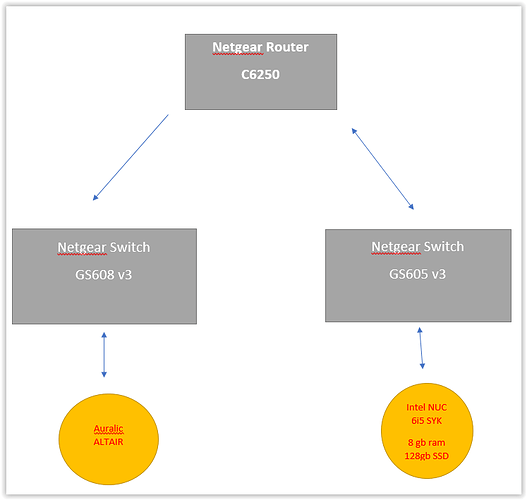 This is how my network is configurated.
My problem is, that playing DSF and hig res flac files, 24/192, the network goes down after a couple of minutes. Music stops and i have to testart my Altair. 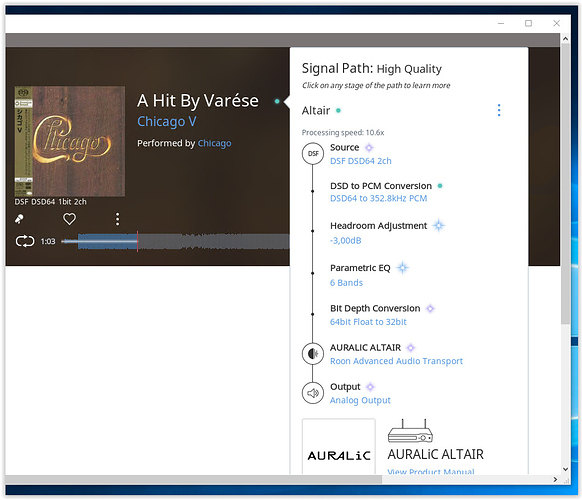 This is my signal path

Do i have a problem with my switches, or what? There was never a problem with Roon 1.2.
Is it really necessary to by some new switches?
Hope you can sort this out. I’m really enjoing Roon 1.3.

Are those managed switches?

No they are not

Are you getting any packet loss or latency issues?

No I don’t Think so i Can play for a fem minutes and then the Music stops.
I have the impression of, the more complex the musik is, the sooner it stops. I Can play a full album with Bob Dylan, very simple Music with few instruments but with for instence a Genesis album with many instruments and “big” sound it stops.

Firstly I would rule out any cabling or switching issues by running some ping tests between your Intel NUC and your streamer from a command prompt on the NUC and running ping [ip address of streamer] -t and run it for an hour and stop by pressing control and c. Alternatively there is free software around such as https://www.pingplotter.com.

I cannot ping my Aries from the NUC. It’s a 100% loss.
Ping to router is ok. It has to be the connection from the router to the switch witch the Aries is connected to, that is the problem.
Do you know how to fix that?

I think i have fixed it. Replaced the cable from router to switch, and now I can ping the Aries with no loss and 0 ms round trip times
BIG thanks for the help
I will now try to play some music!

Well, I would keep testing to narrow it down.

For 1, you can move the cable to a new port on the router and retest.
For 2, try unplugging the switch, wait 10 seconds, then plug it in again, retest. Then try moving the cables to two new and unused ports on that switch
For 3 and 4, you can try a new cable and retest to see if there was a difference.

One question though: How could i play some music when I not could ping the streamer? There obviously was a bad connection.

If you have now solved it, I might try similar things to fix my issues.

100% packet loss means no entire packet got through but there would still be attempts to retransmit which might allow some streaming until too many attempts at retransmission would result in the stream failing.

I’m sorry to say, that i still have problems with dfs files. The music suddenly stops, and i have to restart my streamer.

I now play dfs files without the dsp engine.