Never did I think I'd actually hear Mozart play!

Album is “Christian Blackshaw / Mozart Piano Sonatas, Vol. 1 - Wigmore Hall Live”, so not a problem with my metadata. Damn fine album BTW and there are three more volumes! 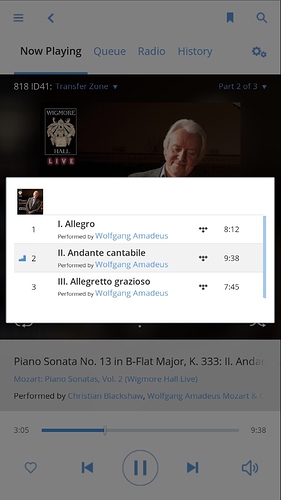 Well, something’s definitely wrong, because Piano Sonata no. 13 K333 is on Vol. 2 of Blackshaw’s recordings of Piano Sonatas, not Vo. 1…

I notice that Tidal has this album as being performed by “Wolfgang Amadeus Mozart & Christian Blackshaw”, so the metadata is almost certainly wrong at source…

Hmmm. I think that is a display problem, because neither track nor album metadata has him as performer (assuming you have identified the album manually).

Well spotted @Geoff_Coupe! It was indeed Volume 2. But the metadata for all of the volumes is rather iffy.