I experience a dramatic difference in detection speed of new albums when coyping them to my NAS (Synology DS1512+) instead of a local drive. On the local drive Roon detects new files almost instantly, whereas on the NAS the sometime show up immediately or with a delay of a couple of hours. Some of them are not complete on first detection and stay like that for hours.
It’s really a pain in the neck… Any idea what would cause this? Something not set up correctly? I do not care whether it takes minutes or seconds for new albums to show up, but hours??
Sometimes when I close and start Roon again, the albums are there, but not always.

Have you tried a rescan of the library once you’ve added new music to the NAS?

@dpstjp
no I haven’t. I do know how to rescan for an album. How to do a rescan for the whole library?

Seems to be normal, with music on a NAS.
I have the same experience.
As the Roon Core is on the same NAS it is fast.
Rescan in Roon is for now the quickest solution.
Might be a challenge for Roon to solve this?
A quick scan button? 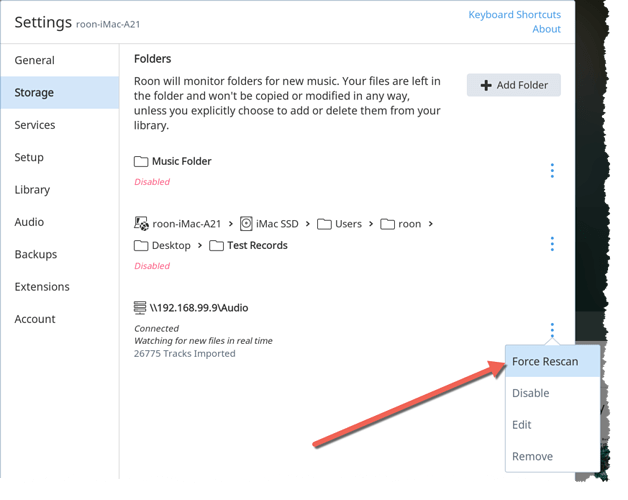 I’m using Roon in QNAP and don’t have this issue. It’s pretty fast to detect any changes (adding or deleting). In Settings / Storage do you see the msg: “Watching for new files in real time”?

I don’t know if this is your problem, but:

If you are running your Roon Core on a Mac and watching music shared from I believe any other system, there is a problem where the OS only informs us of changes when directories are created or removed. So if you have a watched folder like this:
smb://host/share/music/

We find out about the creation of the artist and artist/album directories, and check in:
smb://host/share/music/artist/album
for new files. But, if when that check happens some of the files aren’t yet copied, we are just not told that new files have been added, and will miss all the files until there is a full rescan. There isn’t a whole lot we can do about this. There’s no way to force the OS to tell us about file changes, for example.

Also, if you’re not running on a Mac, I don’t know what the problem might be. It’s probably similar, in that the OS is failing to inform us of changes, but I don’t know of any other specific problems of this sort.

I’m using Roon in QNAP and don’t have this issue. It’s pretty fast to detect any changes (adding or deleting). In Settings / Storage do you see the msg: “Watching for new files in real time”?

I do see it. But it doesn’t pick up most changes automatically.

@ben you got it right. Now that I’m adding more music to existing artist I had the issue described by @Klaus_Kammerer1. Found an easy fix though - I put a small job that creates a dummy folder and deletes it every minute in my NAS music folder or so and the issue is solved. I’ve been checking the logs of the roon core and it doesn’t show any overhead. I’ll keep monitoring though.

I still have the problem - even after “Force rescan” quite some tag changes are not being picked up by Roon. Sometimes it requires to restart Roon and then things are picked up. All in all it is very hard to reproduce - it seems to happen randomly with some album changes while others are picked up quickly.

do you have any idea what could cause this behaviour? It’s really annoying. I honestly would not care to run “force rescan” on a regular basis, but if I’d do it I would expect it to pick up on all my tag changes. Jriver does that just fine when I run “import”.

I know that I can use “Move to Disc” but why should I need to do that if everything is properly tagged and organized? Even Roon tells me that it is CD18…

In addition to that, the move CD feature doesn’t work well on large box sets, because I can’t scroll down the list of CD’S if I have more than 30 CD’s in the boxset or so.