Case 1
I bought, ripped an added a CD to my library which I played before many times from TIDAL. The number of plays of the new added album are copied from the Tidal album. I expected zero plays. So the source of the erroneous numbers seems clear.

Case 2
I bought an album (online) and added the files to my library. I did not play this album ever before from Tidal or from another source. The number of plays however, are impressively high (anyway not zero) and I can’t relate to those figures. When I mouse over all the plays were the last time on a particular day. When I look to that day in my history, there are no plays of that album off course. (A filter would be handy in the history as well by the way).

I moved the files away from my library, cleaned it, and moved them back. This action did not help.

What suggestion do you have?

Radio plays of individual tracks on those albums, before you added them to your library?

Thanks for reaching out! Can you please share a few screenshots of this behavior on your end? Were the albums identified properly?

are impressively high (anyway not zero)

How high was the play count? Was it an extreme value compared to your other plays? Does the album show up on your history?

Thanks Noris for your reply, and sorry for the late answer, I’m very busy lately…

First of all, forget case2 in my OP. I did play that album a year earlier than looking the first time and forgot about that. I did not scroll far enough to the past and as stated: a filter on the history would be very nice to have. So case2 and 1 are actually the same.

So the albums played with TIDAL, and not in the library, do show up in the history and show the correct nr of plays when you look at them.

Then I added the albums to my library and after loading and finding the correct metadata, the new added albums showed exactly the same number of plays as the TIDAL album. New plays of the album from the library are added to the #plays value in the library.

I played 1 of the 2 albums quite a lot of times from TIDAL. After loading the album to my library it immediately appeared high in the album view, sorted on “By most played”.

I don’t know which screenshot would elucidate this behaviour. So I made this schematic description below which describes the issue clearly (I hope). If you have a suggestion for a meaningful screenshot I’m willing to provide that. Of course I did play both albums by now and the numbers do not match anymore.

Schematic behaviour:
TIDAL ALBUM A (situation before adding the album to the library; these plays are in the history)
Track #plays
1 4
2 13
3 1

Library ALBUM A (newly added and never played, correctly identified by ROON) immediately shows as follows: these plays are not in the history. I expected off course 0 (zero) #plays
Track #plays
1 4
2 13
3 1

Then you play f.i. track 3 from the library, it will be in the history and the library album shows as below:
Library ALBUM A
Track #plays
1 4
2 13
3 2

Thanks in advance for your reply and regards
Hans

I think the play counts are extracted from History. So if you want to zero out the counts you need to remove them from History.

I suspect that the counts are not kept by separate by source, just a count of how many times the track appears in History. This allows the count to cross sources and versions.

If the system works like that it surprises me a lot, also given my profession as a systems analist. In the history you can see the difference between a track played from Tidal (in my case from a little grey Tidal logo in the line) or from a library item (off course without that logo). Besides that I’ve never seen that behaviour before. Who knows for sure? You think and suspect

I can give you an example with a new album which I added recently, of which I played 2 tracks, one from the Tidal version, 1 from the new library version. The Tidal album shows ok 1 play. The library version 2 plays, in total (incorrect) 3 plays. In the history there are only 2 plays. See the attached screenshots. 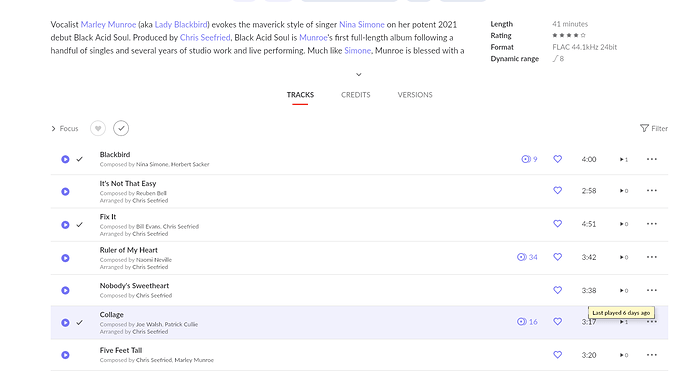 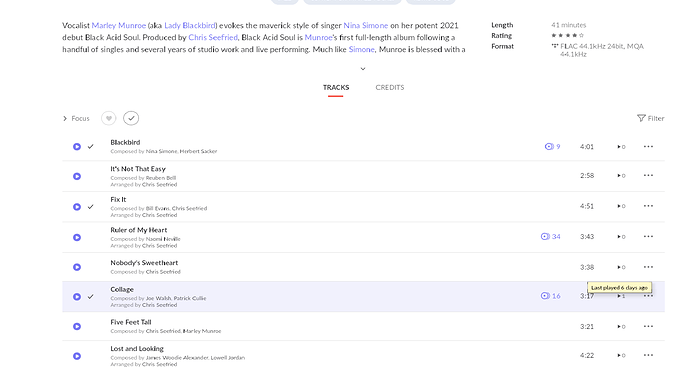 Check out one of posts from awhile ago. It might be relevant.

Hi Kirsten, nice to meet you. There are several … gotchas… with play counts in playlists vs the album page for in library vs out of library content. I’ve pointed this out before, but, probably has gotten lost. The point is that if you add a track to a playlist in Roon, Roon does know what track is being played and is adjusting the play counts on the album page, it is just not displaying them in the playlist. Just using the album page: Using “Evelyn, the Modified Dog” by Frank Zappa as an e…