Hi!
Running Roon on ROCK with my library on a syno nas.
I’ve set roon to only scan folders on startup, assuming (according to the explainer text in Roon) that roon will also watch folders in realtime. What does that mean exactly - how long should I normally have to wait before rock detects the change?
Thanks!

I am using a QNAP NAS (TS-431) for my library and the real time updates are not working well for me. Sometimes a new album is detected after a few minutes but most of the times the changes are only detected after forcing a rescan in the settings/library menu.

I’m running a QNAP TS-251 with 8gb of RAM and in my experience, a change to the library is picked up in less time than it takes for the Roon control app to start up. Once it is open new albums are always fully visible.

Take a look at Settings > Storage and you should see Watching for new files in real time. 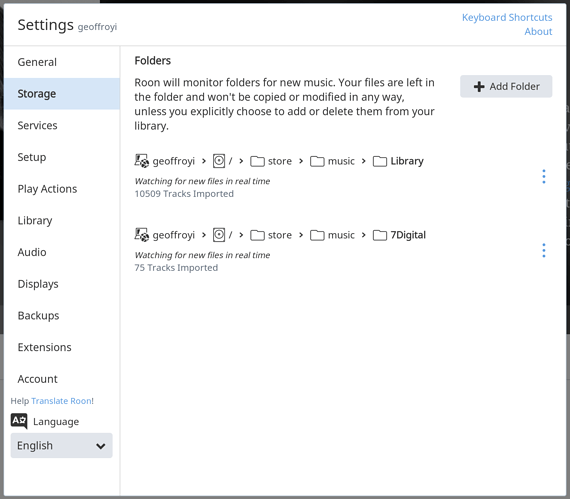 If I add files to my library Roon picks this up immediately. If you’re seeing changes I suggest you check that file permissions are correct for the share.

Please note that it’s a good idea to stop the Core if you are performing bulk changes/ uploads to files in your library.

Although not a ‘big’ problem for me, this also never worked for my QNap TS-491P NAS, my “watching for new files” is enabled. I typically do a manual re-scan, of just wait for my Automatic Rescan Interval, which can be set to e.g. 1 Hour. For me that’s too often, I set it to 24 hours to prevent too many spinning disks when sleeping or working. 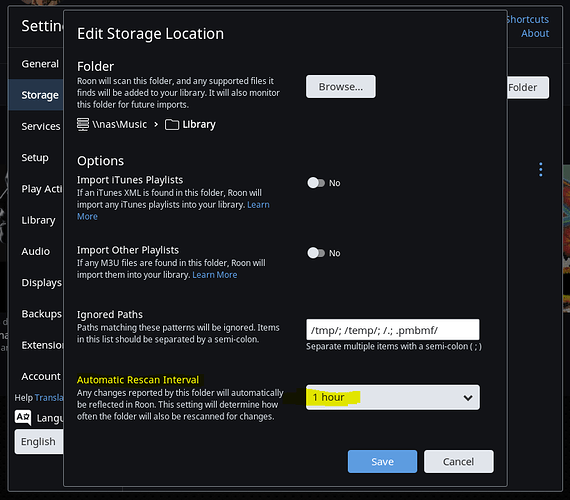 My experience is that Linux based Roon servers (incl. Rock) can’t detect changes real time on network shared folders, this is a Linux ilmitation. I had a Windows Roon Server before and detection of changes on my small Synology NAS was instant. Now I have to wait for the daily rescan or perform of “force rescan”.
Otherwise ROCK has only advantages but I do miss this feature.

Technically it’s actually related to the samba implementation. So it really comes down to which implementation is being used by the nas, not whether it’s based on windows og linux. Windows file servers get this for free, as it has been around for windows since the early Win NT days. Unix implementations can be a mixed bunch…

As mentioned by other users, Linux based Roon servers are a bit more unreliable at reporting events that occur due to watched folders than Windows based directories. You can read more regarding this behavior in the following threads:

This made it all make sense to me. I know what’s happening. Roon knows that it can’t trust NAS’s to report on filesystem events in all cases–and there’s no way for us to detect whether events are coming or not. NAS’s just silently report a subset of events, or none at all. So “real time watching” isn’t real time all the time. We did some research and found that just about every piece of software that attempts to do “real time watching” on NAS’s eventually runs into this limitation, and supple…

Is adding to Library from Watched Folders Automatic? Support

Hey @Semaxx @Gabriel @Patatorz – as a general rule, Windows picks up changes more reliably than Linux or Mac, but all of this really comes down to the NAS consistently reporting changes back to the machine running the Core. For the most part, we’ve found that most NAS drives do not do this reliably, particularly when the changes don’t involve creating or modifying folders. We’ve recently added the option to customize how often Roon manually rescans your NAS for changes, which is a workaround, o…

This is a symptom of how real-time file watching works on Windows, vs on Linux or OSX. Remember that SMB is a Microsoft technology–it’s a first class part of the Windows ecosystem in a way that it isn’t on Linux and OS X. One result is that Windows tends to be a bit better at picking up changes on SMB shares in real time. We’ve made some improvements to Roon’s filesystem watching behavior over the years, many of which were released with Roon 1.3 a couple of months ago, but ultimately when the …

Hope this clears things up a bit but do let me know if you have any other questions.

4 posts were split to a new topic: New Files from QNAP NAS don’t show up on Windows Core