Thanks. Can you please share how to bring back the lights. I might have pressed some button accidentally as you said.

Good news that it is working so well for you.

When using AIO mode you can enable or disable the services as required. By default they are all on.

So far I have used Airplay, Roon, HQP, Tidal connect and Spotify Connect. All have worked perfectly and waiting for Chromecast support to come.

I too have the D90SE and A90 plus Pre90 and EXT90 too make a complete set…maybe will get the mono blocks too if they ever produce some.

I also have 2 x Drop THX AAA 789 that I used to use… not tried proper AB testing yet tho as can are really not my ideal listening setup.

Thanks. I feel stupid for not trying that myself. All well now. 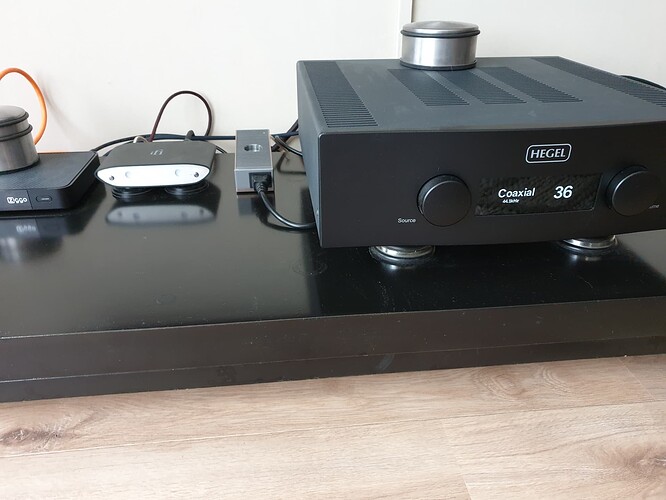 WOW the jealous green monster in me coming out

So I have a Stream, I have the door stops, so what am I missing

This is a great setup…I am sure worth its price tag. Hoping to hear how the ZS stacks up against the internal Hegel H390 streamer (if it has one).

Also, i noticed you were using the Elite. Is there a SQ/noise floor difference between the supplied iPower and the Elite. Thanks

I was wondering what the device was and hadn’t thought it was iFi Elite.

I see a number of users with H390s use a T2 streamer and DAC but that is about 8 times the price of the stream, though I hear from it’s owner’s that it is amazing.

I play Roon with Tidal via the ifi zen stream, replaced the supplied external ipower plug with the ifi ipower elite power supply, then to the dac of the almighty H390, pure high end for little money, and I think it is not much inferior to the Lumin T2!!!

I hope the community doesnt put me to the stake for this…but to my ears, Tidal Connect sounds better and more cleaner than Roon through my fairly revealing system. I think its because the data doesnt have to transfer all the way through my ROCK and LAN to my ZS…where the ZS directly would be taking in the stream from Tidal servers. Dont want to make it a rant but if you give it a chance, the new Tidal app has as much intelligence, looks and useability as Roon has an then some…plus I dont know but Tidal Radio seems to work better for my taste in music. I am a lifetime subscriber for Roon and still have abovementioned opinion.

I dont do Room EQ for now as I have felt it takes away some of the character / life out of my system, so I am comparing apples to apples here. Could be placebo as well but love to know what others have observed.

It’s a common complaint that Roon does not sound as good as other audio systems, but we use Roon because of its interface and discovery feature and it’s ease of pairing.

I also felt that Tidal connect from the Stream sounds just a bit better, not night and day, just a little bit.
Have you used HQPlayer with Roon and then ZS. If not don’t as you will spend more money

I’m somewhat reluctant to post this as it may already muddy the issue of power supplies, but I’ve gone through now the original 15v included with the unit and 9v, 12v and 15v ipower x (ipx) adapters. The units that I measured on the multimeter are as follows:

Did not measure the 9v since it seemed like it lowered the volume output by a good deal and sounded flat overall. Did not hold on to it for long.

The original 15v that came to the unit sounded best initially but after some time it became apparent that the top end had some bite to them that I didn’t care for. The 15v ipx just sounded flat to me, I tried plugging it in upside down to see if polarity was an issue, only minor improvements but on the 12v ipx I managed to hit a sweet zone with reversing how I plugged it in and it will be the psu of choice, for now.

It would be nice if I could say there’s a voltage that sounds best but so far it seems it varies from each adapter. I’m interested to know if anyone compared the ipower x to the ipower elite and if there was any discernable difference? Also, curious to know what other PSUs people are using, perhaps we can narrow down a best fit/voltage.

Haha, i was afraid you were gonna mention HQP. Now my green monster wants me to try it. I do like pin point accuracy in my instrument placement and use Laser measure to place my KEF R7s wit enough distance between them (~9ft) to create a proper sound scape. Given that, would HQP bring noticeable improvement? I mean if you compare Tidal Connect to HQP…would there be noticeable difference? If yes, is it with HQP’s DSD mode and would love to know your subjective thoughts on how you felt how it improved the sound? Thanks

I am currently playing with it on my older Nuc 7 that I replaced with a Nuc 10 earlier this year. You can use the free version for 30 minutes at a time before it stops so it’s worth a try if you have a spare machine that you can create a bootable USB and let it go.

I liked it both for DSD256 (stream USB out) and 24/96 and 24/192 for the SPDIF.
While I have only spent 3 or 4 hours playing with it, it felt really good, especially with the DSD256. My PC not fast enough to fully test the rest but I could see me buying it for use with a stream and a good amp (Rotel/Hegel) in the future (and a faster silent PC)

Even with your older NUC you will be able to find filters that make an improvement and work on your machine. Try poly-sinc-gauss, ASDM7 or ASDM5 and DSD 256 or DSD 128. There is also PCM which is easier on your machine as well. I’m using a 5 year old laptop i5, 8gb ram working fine when you discover its limits as HQPlayer will point out for you when playing around with it’s different fiters/modulators.

Thanks. I did read a review on Audio Bacon for HQP and how many features it had. Thing is, a couple of months ago I went all in to room correction using probably the most advanced REW+time alignment+phase correction blah blah guide on Roon. But then I kept perfecting it…to the point that for a month, all I was doing was to take multiple measurements, adjusting the frequency response and spending hours correcting phase shifts…bit of an OCD behaviour, I know…only to land to a point where I actually preferred NO room correction over any. Point is, I could have spent that month listening and discovering music. I did manage to improve the speaker placement to a point that any room correction made only marginal difference subjectively anyways. I mean I do add a sub (SVS SB-3000) to my R7s…

I know I am not the only one here but I feel having access to so many filters and dithers will do more harm to my musical experience than good. Sometimes different isnt necessarily better and while I am sure HQP is not just different but also better as many pay $$$ for it…I just feel it will be a musical trap that will make me a reviewer of music rather than a consumer who focuses on enjoying it. If I were to focus on how Melody Gardot’s beautiful lips are moving (through various filters and dithers) as she sings C’est Maqnifique and everything else goes out of view, I would leave my music session not relaxed but tired instead. Rant over!

This is just me but between audiophiles who care about music, I am sure its a common challenge and well, knowledge is power!

Deano I saw enough good stuff that I was happy with it. It would need a silent case like my Nuc 10 but I got enough out of it and DSD 128 and even 256 with some filter’s worked. But I have never heard the Nuc screaming like that with the fan turning on and staying on

Stick with what you are happy with.
There is no pressure from anyone to use HQP and I tried it because I was reading so much about it.
I will continue to try it over time before I eventually decide to buy it or not