Hello. I have an Intel i5 NUC running ROCK. My music is in an external drive. I transferred a new album to my storage from my laptop Typically, how long does it take for the new music to show up in Roon?

I know there is a discussion addressing this subject, but it was from 2019. I’m hoping that strides have been made since then. Thanks.

Instantly for me. If its not showing up it could be a) it’s not identified it as it’s not in Roons metadata services, b) Roon can’t read the files, c) it’s a duplicate of an album you have already in your library perhaps from a streaming platform, d) there is some issue with Roons database or the drive.

I would first reboot the core and see if it comes up, if not

For
a) do a focus search for unidentified albums to see if it can be found and try and get a match manually
For
b) check in library section of settings for skipped files. It if it has check them in another app, try converting them via some other software or raise a support ticket.
For
c) find the album manually in albums using the funnel filter Ann check the versions tab, make your own version primary.
For
d) raise a support request.

Have you tried forcing a re-scan? Should be an option in Storage settings by tapping the three dots to the right of the specific storage folder you added your tracks to. 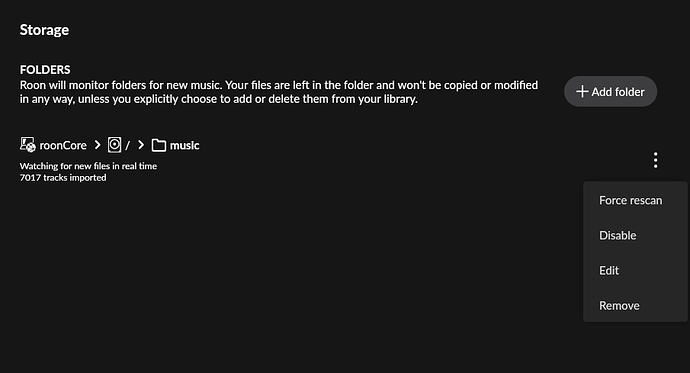 It could be a)…it’s a new release. Although, many of the tracks were previously released as singles

I have had that with brand new CDs before now they couldn’t get any metadata. More than likely it’s not in either of Roons metadata services. Is it dance music or classical? Roon can be weak for these. But it should show up regardless if it has some metadata embedded in them.

Then likely unrecognised, use focus to show unidentified albums sort by date added and you might find it then.

Hi. If Unidentified is a choice under focus, I don’t see it.

I bought the album from Bandcamp. I would think that it contains metadata.

It’s weird because a few weeks ago I added about 20 podcasts that I downloaded on iTunes. Those showed up immediately.

Choose identified then click on the + symbol to invert and it it shows unidentified. A lot of Focus options work both for + and -. Sorry I assumed you would now this. 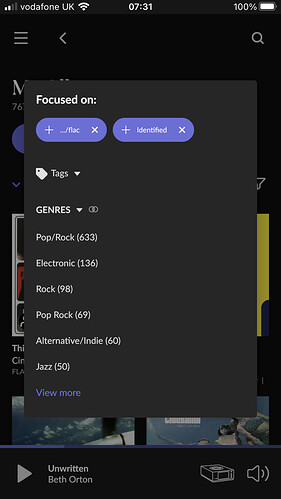 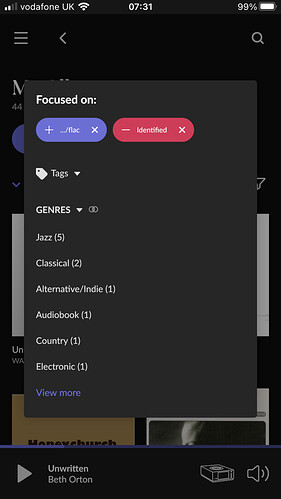 Did you reboot the core as I recommended first , a few of us had the library stop updating after a recent update and a reboot sorted it. The scanning must have just fallen over not had it again.

If yes to No.1 then the tracks will be hidden hence setting No.2

it’s a new release. Although, many of the tracks were previously released as singles

my money is on the “hidden” thing. If the singles were grouped into an album, that album might be primary, hiding the new one.

I don’t think it’s a metadata thing. I’ve added tracks that have no metadata, like personal recordings, and they show up right away. They’re “unidentified” but they do show up.

I figured out the issue. I’m a bonehead. The album/files in question was downloaded as a zip file. I extracted the files and placed them in my laptop’s music folder (so my DJ software can access them).

I must’ve hit the back button, which took to the zip folder’s location. This is what I copied and pasted in the drive that Roon has access to. I didn’t transfer the extracted files. D’oh! After doing that, the files showed up instantly.

This is a lesson for me. Thank you to everyone who responded.