Add new remaster of Metallica’s Black album to Qobuz favourites, when viewed via Roon Home page first track is missing. If I view via Roon Qobuz page, album is complete. Have tried deleting and re-adding, stumped. 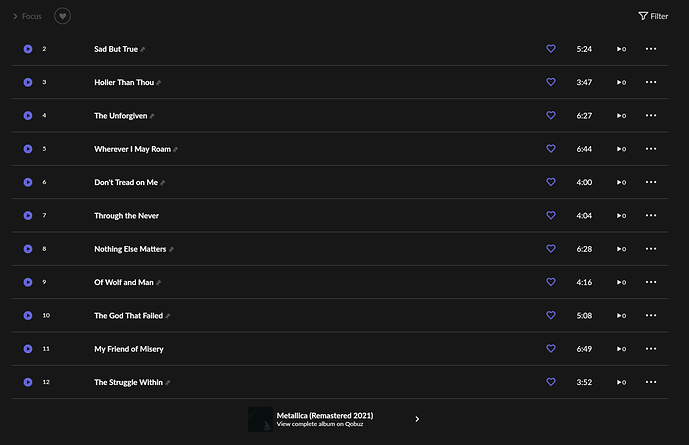 ok, looks like this is due to Enter Sandman having been added as a favourite a few weeks ago when it was released in advance of the full re-master of the album. For some reason, completion of the album has not worked via Roon, but when I went into Qobuz directly and deleted the separate favourite for Enter Sandman and re-added the album from scratch, it worked.

ho hum, tried a different Core, and once again Enter Sandman is missing. Have tried everything, logging out of Qobuz etc, Roon will not show this track in the track list via the main album view, but does show it via Qobuz.

Shows fine on mine

I’d try removing (from Roon and Qobuz) all the releases you have of this album in your library, restart your core and the add them back again.

a full delete/re-adding cycle did not work, but delete / library maintenance / re-adding did work, so got there in the end.

That’s funny.
I just had a similar experience with Wildflowers by Tom Petty for same reason.
Adding pre release " teaser" tracks before actual album release seems to confuse Roon for sure.

Yep, I don’t add pre-release tracks to my library, causes issues. This can sometimes result in an album with just the pre-release track and then the full album later with everything but that track.

One solution, is to find both albums in the library and merge them. Also, as the OP discovered, deleting them both, cleaning the library in library maintenance, and then re-adding works too.

thanks for the additional comments. Sounds like I’ll have a workaround if this happens again (e.g. I have the teaser track from the upcoming Robert Plant / Alison Krauss album), pending a fix from Roon.