"New releases for you": any way filter releases that are clearly not "for me"?

I’ve been checking this “new releases” features hoping it would be better than that of Tidal and Spotify, which gives me ALL releases of crap including hip hop, raggaeton, latin pop, etc, and I was wondering if there’s a way to ONLY see new releases from artists that are in my Library/collection. This would be the logical way to see releases that are “for me” and not just “new releases for everyone”

I have not found an app that is capable of just giving you releases from artists you already like, which really makes me wonder if this is so hard to program or what. I’m forced to use third party sites like Music Buttler for get notified of new releases, when this should be a very basic and simple feature in all streaming platforms, as well as in Roon.

and I was wondering if there’s a way to ONLY see new releases from artists that are in my Library/collection.

That’s exactly my wish! My guess is it’s not possible with Roon

but isn’t that section created by Roon? it surely can’t be THAT hard to implement a filter for only artists in one’s library

It sounds like only two people are interested in this feature. You and me. So likely not a priority for Roon developers

I’m glad someone mentioned this, just today I got recommended some truly weird picks that are not at all interesting to me.

The tidal app has the “feed” feature (best new feature they’ve ever added in my opinion) which shows only albums or singles released by artists I have, it would be good to have this feature in Roon.

Apple Music now gives me notifications for albums I have pre added to my library (something Qobuz supports, the pre adding, but does not notify).

Does feel like Roon could really strengthen the user experience here.

If you long hold or righ-click you will get the 3 dot icon and clicking that has a Dismiss from this list option. I assumed if you used this enough it would improve the list over time. Hoping it works as a dislike and not just removing from list. The list is supposed to be based of your play history but doesn’t seem to work nearly as well as what Spotify can do with its recommendations and personalized playlists. They have a lot more user data to make the connections meaningful.

I’m still surprised this is not high up people’s complaints list.

I noticed that like most comments on this thread that the New Releases For You section is usually stale or at best very delayed. Today, I see the latest Album under this section was dated 13th August!

Has there been a recognition of this issue by Roon dev?

New releases for you not updated in weeks Support

logs have been send

I have used MusicHarbor to achieve this but Tidal added this feature a while back. Not sure why Roon doesn’t just pull this stream in (obviously appreciate nothing is ever that simple but at least this has been implemented on the streaming side). 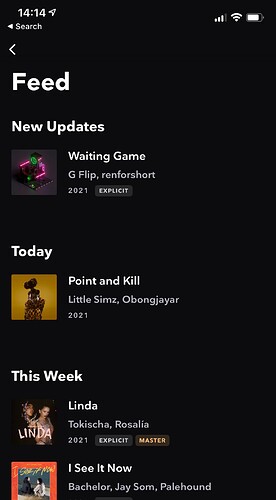