Yes I know but I listen to a lot of black metal and symphonic metal and I find clipping without the added headed.

Sure, makes sense. I compensate for that by lowering the SDM gain adjustment in the sample rate conversion section, since I listen to those genres too and the only time I get clipping is with upsampling—when on lossless there’s never clipping and there shouldn’t be. The downside is that my upsampled tracks are occasionally a little quieter than the others, but the sound is good.

But I have no data to support that one strategy is any more deleterious than the other, other than the SDM adjustment being one DSP vs two. But from what I understand Roon’s 64 bit float volume leveling is minimally-destructive.

Frustrating thing is that I can’t get the clipping to stop for my DSF files when they’re upsampled. I created them from SACD ISO files and I’m worried I set the gain too high in JRiver. And we’re talking 250+ albums—I shudder at the thought of going back through that ordeal again

Maybe I’ll try your volume leveling solution and see if that fixes it, thanks!

Good thinking I will give it a try.
Currently it works well for me

When you’re applying upsampling or pretty much any kind of DSP to a signal, you need to add some headroom to avoid hard clipping. In the PCM world, this is to avoid intersample peaks in tracks that have been normalized by the mastering engineer to 0 dB. For DSD, it has to do with the Delta-Sigma converter and related processing.

Take heart though…once you’ve decided to upsample, you’ve already crossed over into the non-bit-perfect world. At that point, there’s no need to be concerned about maintaining partial bit-perfectness. Just do what you must to achieve the results you’re after. Roon’s 64-bit DSP engine is among the best in the business, so you don’t have anything to worry about.

Also, remember that an “Enhanced” signal path can be better than “Lossless”. That’s why it’s called Enhanced!

Thanks David, I’ll try it—I only apply it to my DSF 64 tracks to try to reduce quantization noise anyway. Most of my DSF tracks are sampled from ISO at 256 so noise shouldn’t be much of an issue there.

Since the ZEN Stream is really more of a Bridge device than an Audio device, I think it’s appropriate to leave the Audio device set to “Unidentified” for now. Perhaps at some point, Topping will submit some of their products for “Roon Tested” certification. At that point, both the Bridge and Audio devices can be identified (probably how this works already for many iFi DACs). 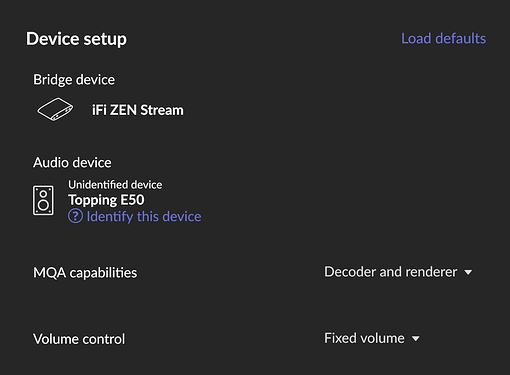 I picked one up to take the place of a NUC. It will arrive soon.

Haha. Congrats! Which DAC(s) will you pair with your shiny new ZS?

The SMSL SU9 for now. It may end up driving my headphones and that is a Topping D50s. The STAX amp having an RCA passthrough lets me daisy chain two amps from one DAC. it’s kinda neat IMO. My current thinking though is the ZS will replace an I7 NUC I’m using solely as a HQPlayer NAA endpoint.

I’ve not tested the HQPlayer NAA functionality. In this case, you won’t benefit from the Roon Ready firmware, but I’ve not heard any problems with NAA, so you should be fine.

I would suggest giving Roon RAAT a try as well to see which you prefer. Roon’s DSP has seen several improvements over the last year.

I’ve been upsampling with HQPlayer and using Roon DSP for headphone changes.

I have not found the special sauce to upsample in Roon nor do I understand convolution filters entirely in HQPlayer.

I have reached “it works so enjoy it” for now. I guarantee I will hit, “I really should figure out the other way too” soon enough. The ZS will probably be that impetus so I may do some real a/b testing. See if it makes any difference I can actually hear. 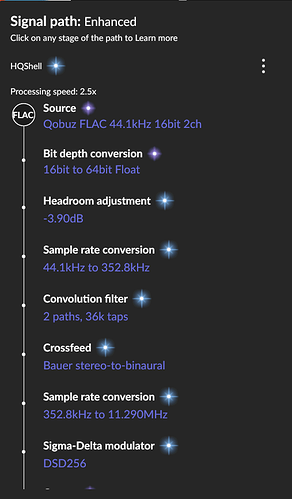 It’s been a while since I’ve used HQPlayer, but from that signal path, it looks like Roon Core is doing all of the DSP (including upsampling)…not HQPlayer. Am I reading this incorrectly?

No, that is what I poorly tried to convey.

In that Signal Path, I agree with you, it is all Roon. First the upsample of PCM to apply the Convolution and Crossfeed, then that is converted to DSD 256. HQP is not shown in that Signal Path. 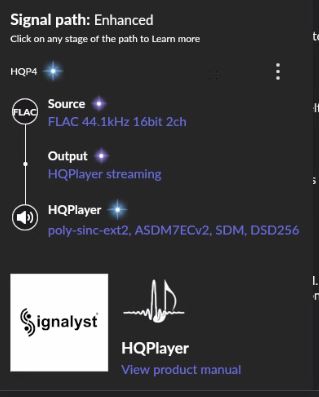 That is a frightening thought.

It was meant to be

The ZS should pair terrifically with your SU-9! According to ASR that unit rests comfortably among the top measuring DACs to date, and with it connected to the ZS via USB, you should have access to the fullest range of features available from Roon.

Seriously, I think you’ve made a solid investment with the ZS, and did so just at the right time. The road since launch has had its share of bumps, but with this latest upgrade to Roon Ready status, I’ve experienced truly seamless performance from it and I’m delighted to finally have access to Roon’s feature set as it was intended. If you need any tips during setup, we’ve got your back. Enjoy!

Just curious as to what benefits you’ve found with HQPlayer above what can be achieved with Roon itself, in terms of sound quality improvements? I’ve attempted to install it several times over the years, but I haven’t seemed to have gotten the hang of it. Does it require a lot of user programming to function consistently, or can you set it up once and leave it alone?

Are there significant differences between HQPlayer and Roon in terms of upsampling functionality and quality? I’ve always used Roon’s (or Audirvana’s) native upsampling engine and have so far been pleased, but I welcome options that would have audible advantages…