Considering for how much a Raspberry Pi 4 with SD card and case + usb cable is going (used prices) ,I might as well just spend a bit more and get the Zen Stream.

But the Zen Stream is nearly 400€. And I have been reading comments that the basic PSU isn’t that good?

So replacing that would cost another 115€.

What would I be able to do with all the USB ports on the Zen Stream? Is it even worth it if my only source is roon?

Marc
A Pi is plenty good enough as long as you are happy with it, and you probably will be.
When I bought my Stream it came with the good power supply but they are now an extra cost.

There are only two USB ports on the Zen stream, on is for USB out to a DAC and the other allows you to plug a USB memory stick or Hard Disk into the stream to play music from it through the Volumio web page or app.
My role has been to help people who have them get them working well, not advocate for people to buy them.
If you have a Pi and are happy with it then stick to the Pi, because it’s USB outputs while not perfect are good enough to supply good signal to the DAC to generate the next stage.

I echo Michael’s comment, and I’m also not invested in pushing iFi’s products in any way. However, I would argue that the ZS was envisioned from the start as predominantly a Roon Endpoint—the fact that they went through the effort and expense of building in a Roon Bridge and including a Roon-exclusive hardware selector is highly suggestive of this. Obviously Roon integration would be a highly-regarded and near essential feature for any streamer.

And I think iFi was strategic about their price point and design in presenting this as a premium version of an RPI—it’s been well-established that the only thing really required for the highest possible sound quality in a streamer is a well-designed and equipped micro PC, and all the stuff you’re paying for in outlandishly-priced fare from NAIM, Cambridge and Cocktail Audio is a fancy hardware GUI and excessive and superfluous circuitry that has no audible impact.

So iFi basically seized a vacuum in the market for a prefabricated version of Volumio-based micro PC, with a pleasing form factor, audiophile-grade galvanic isolation and ANC (which is one of iFi’s renowns), and a suite of competitive features—MQA certification, Native DSD processing, integrated Tidal and Spotify Connect, Airplay, 5Ghz bandwidth, stutter-free buffering and finally, Roon Ready certification.

There really is no other streamer anywhere close to this price point that performs so well and is so feature-rich, and although I fully respect others’ budgetary priorities, this is one product that I think was unprecedentedly underpriced—one only needs to look at the cost of the BlueSound Node, which drastically underperforms the ZS, to appreciate this. Although the ZS was probably released a year too early before it was fully ready to live up to its promises, in its current state—if you have the funds—I think it’s a great buy.

Although the ZS was probably released a year too early

Absolutely true along with the rest Steven

I had a Pi with a Allo SPDIF HAT running Volumio (and before that Dietpi) and it worked really well and I was very happy with it. However (last year) I needed an endpoint in my study so I moved the Pi into my study (SPDIF>RME DAC) and bought the ZS to feed my Naim DAC>Supernait 3 via SPDIF.

I didn’t perform back to back (A/B) comparisons but I’m confident that the ZS provides more clarify and detail. Yes, I had a few occasional troubles with the ZS along the way but at this moment in time (with the most recent firmware update) I have zero issues and I think the ZS is a fantastic streamer for the money and would have no hesitation in recommending it. (Although I have no experience of it’s USB>DAC capabilities)

My ZS arrived and a power supply.
One of the least friendly installs I’ve done in a bit.
I spent the first hour wondering if it would ever see the USB ports. It did.
Only took 2 hours, multiple reboots, and resets to upgrade but is streaming from HQPlayer.

You got further than I did…lol.
My first one turned into an odd shaped brick within the hour.
The second one did fare better I will admit, probably helped by myself deciding to read up a bit this time

I don’t think there will be a third one.

I hadn’t gotten desperate enough to warrant pulling out documentation. It was touch and go for a while though.

I don’t think there is any need for that kind of talk around here,

Agh, I was about to post a step-by-step abridged guide for you but didn’t get to you in time

PM me if you’d like some settings optimization I’ve worked out over the many months.

Paul
Too long ago for me to remember the install, but at the time the documents on the web did not agree with what was in the box regarding the dedicated mode’s.

But the quick start guide was pretty easy to follow, but it came out just after the major supply chain issues struck and power supplies were almost impossible to get.

I would have hoped that they had improved to on boarding process in that time not made it worse.

What were your issues as I know you are a technical guy so that might help.

Steven you cannot use HQP in Roon exclusive mode.
If you want to use HQP and Roon together you will need to be in AIO mode and then disable all other services. I seem to remember a dedicated HQP (NAA) mode which might be interesting, but not great for testing both together

I thought so—thank you very much!

Mine sounds so good with Roon Exclusive mode with USB and Roon’s own upsampling (when needed) that I think I’m going to stick with that for now.

I’ve never had my system sound so stellar—Tidal MQA Studio and Qobuz in lossless mode both sound spectacular, and the only files I really upsample is my DSD 64 files—they’re the only ones where upsampling should provide any benefit, to push the quantization error noise further up into inaudible frequencies. But most of my DSD files I encoded at DSD 256 from SACD ISO with JRiver, and they’re already there.

The FLAC/MQA files are already at PCM 192 or 96 and they shouldn’t really have any audible quantization noise at 24 bit (192 kHz at 24 bit is roughly equivalent to DSD 128 or higher already). So I can’t really see how HQPlayer’s upsampling engine could make a difference (or Roon’s for that matter, except for DSD 64, which is “similar” to PCM 88.2).

I’m going to forgo HQPlayer’s fees to keep saving up for a set of Meze Elites or Dan Clark Stealths.

Yes I am HQP curious but can never justify the price without the right hardware to make it sing. It does have an uptick in sonic qualifies again but it requires my server to be on all the time and it doesn’t quite meet the requirements without blowing a lot of fan and still stuttering.
Roon dedicated mode is running like a dream for me at the moment and with the switcher option you found

The devices button to launch the web page where we can switch between USB and SPDIF. Since you pointed me to this my device has been permanently is Roon only mode.

Ah, that old thing! Well I can’t claim to have found it—someone on Head-Fi discovered it and I ran screaming over here to share it. I WISH I had figured it out earlier—I’m not sure whether other Roon endpoints have that, but I’m pretty sure this is some wacky iFi proprietary thing. Whatever, it works.

I’m still switching back and forth (obsessively) every couple of days to check for new betas. I’m praying that iFi kept that DSD 512 option in the settings for a future firmware that enables it. I’m pretty OCD about these things and derive a sort of primal pleasure from discovering new updates. Before I got a full decoder DAC I used to get some sort of Pavlovian response every time I got the magenta led to light up when I got MQA working.

IFi is being coy over at Head Fi about what they have in the pipeline. And also typically ditsy. They just released a new MQA blog post stating that only the Pro iDSD, Diablo and Neo are full decoders, and that all their other DACs are renderers-only. This is demonstrably false—they upgraded their Zen DAC, Hip DAC and xDSD lines to 16 core XMOS processors last year and all latest iterations allow full decoding—I have the xDSD Gryphon, Hip DAC v2, and Zen DAC v2 and they all perform complete unfolds. Even the MQA website confirms this. I don’t know what their organizational structure is over there, but I think their technical and marketing teams are permanently disconnected from each other.

Off topic, but if you’re ever in the market for a new DAC/amp (especially a portable that can go head-to-head with any desktop), the Gryphon is simply awesome! 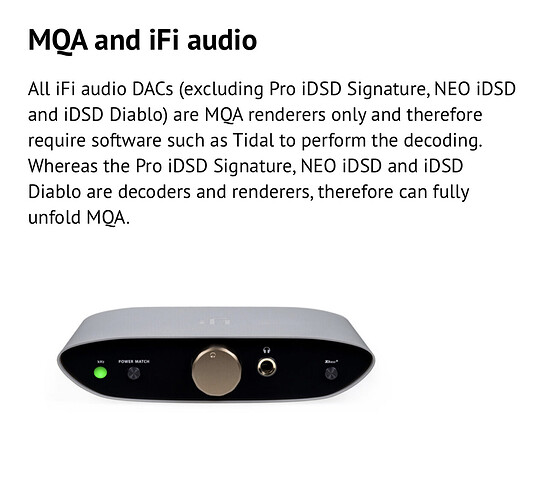 Well that little thing made a good difference for me thanks.

I have a Matrix Audio mini I pro 3 as my main headphones set-up (which is excellent but a completely different price bracket to the Stream) though to be fair the Stream gets more use as it is in my study.

As for MQA, it’s on, it’s off and then on again.
I reduced my Tidal Sub back to Hifi plus to get 16/44 and I am happy with that for now. I might go back at some point.