Strange things happen!
I was listening to my CD rip of new Offa Rex album and this is what it showed 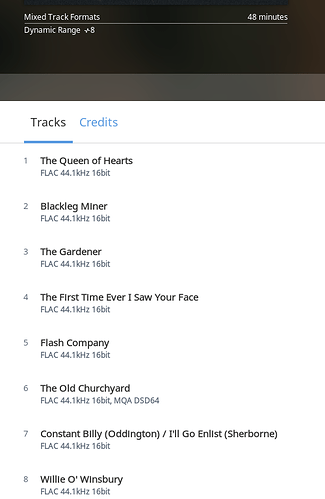 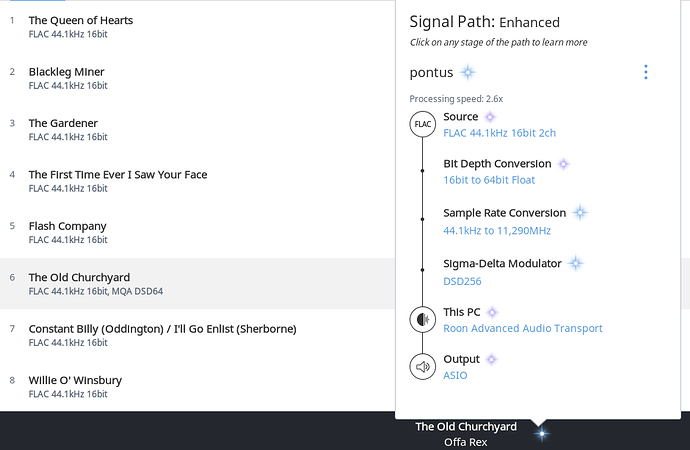 immagine.png940×614 70.8 KB
In the album screen a MQA symbol appears on Offa Rex album but not in Tidal MQA albums (the only real MQA albums I have in my library)
I played an another album (tea & Symphony) and same thing happened and if I focus on format now I find 2 MQA albums!!! 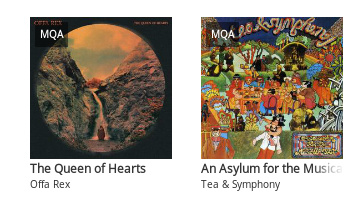 Freddie White, quite possibly only known to Irish audiences. A great guitar player with a sonorous voice that can bring such emotion to interpretations of others songs that makes you totally reassess them. [image] Highlights last night included Ashes to Ashes Going going gone (this was turned into an "all along the watchtower " type interpretation of what I would always have considered a bit of a throwaway Dylan song) hey that’s no way to say goodbye. If you happen to be in the Emerald Isl…

No, the fix will just require a rescan of the affected albums, nothing more involved that that.

This is occurring for newly imported files. My 24/96 vinyl rips that I create end up having 1 or more tracks showing MQA. I imported a downloaded mp3 compilation from a band yesterday. One song there also shows MQA. No difference in bit or sample rates for these files, they just randomly get the MQA designation. As pointed out, this is only impacting material imported newly imported. Don’t see any existing albums showing MQA incorrectly, so I’m sure all of these albums will need a re-scan once the issue is fixed.

I have seen a few MQA tags too today. I don’t have any MQA tracks.

Just put this album in and I get this. 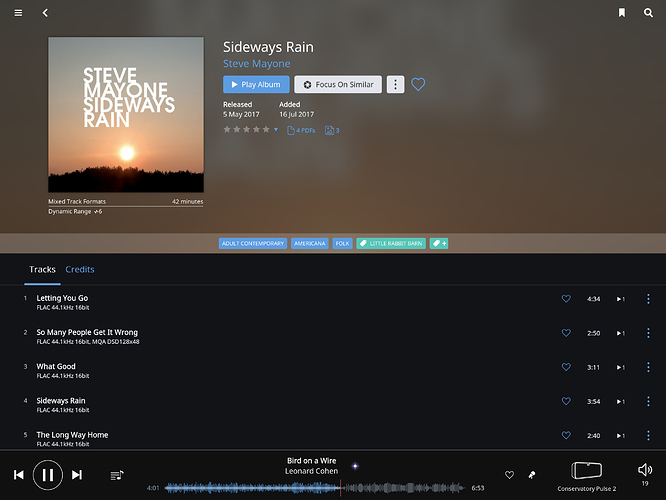 We’ve all seen numerous examples, so really makes me wonder how thoroughly this was actually tested before release.

I’m seeing about ⅓ of newly-added albums showing as “MQA” and, of course, none of them are. Seems this would have shown up testing use case #1 (i.e., add new album, see if the code works . . . )

I have added quite a few albums since the latest Roon update, own rips, downloads (Red Book and HiRes from numerous sources), brand new and old releases, but there was only one that had the ‘false MQA’ glitch. That’s hardly ‘one third’, is it?

Isn’t is a bit ‘eager’ to suggest that the new MQA-sniffing functionality wasn’t tested thorougly?

Of course it was, like everything else Roon puts out. But there are a gazillion different tracks out there. And it’s so very, VERY cutting edge what they’re doing with this… Glitches will happen, and like Mike said: they’re on it.

The fix will come soon enough, and until that time the tracks will play without a problem. So cut them some slack and be glad that the good people @Roonlabs are actually ‘on it’.

. . . and my experience is different.

Sometimes I think we need a

I’m not doubting that, and I can even understand a certain degree of frustration. But the tracks play just fine, so it’s a very minor (and temporary, I’m sure) inconvenience.

I felt - and still feel - that your accusation of insufficient testing is speculative and uncalled for.

Frankly, I don’t care about the label - doesn’t matter to me at all, as I’m not looking for MQA content at this time. I simply was making a comment that it’s hard to understand how this was not caught in testing. Not sure why this is so seemingly controversial.

I got about 25000 tracks ++ in my NAS more than 60% are .WAV and the rest is .dsf files, none exhibited this issues. I think those who have .flac files are more easily mislabeled. Small issue though…

It wasn’t spotted because… here is the kicker… because It Wasn’t spotted… Stuff happens all the time. Knowbody died and a fix is pending. First world non issue I think.

None exhibited the issue cause they’re already in the library. You probably haven’t added anything. This has happened to now more than a dozen of my last 25 albums added, spanning formats. Randomly happening with my new vinyl rips and with my second Roon library it is happening with different albums than on my main library.

So I tend to agree that this wasn’t well tested. Way too easy to reproduce.

I agree, this should have been caught before the release. Anything related to audio analysis is especially annoying to get wrong. This week, I will be following up with the team to figure out how this slipped through the cracks and how we can prevent similar problems going forward.

Is this a known problem or something new so I have to upload this track in PM to support staff? Roon core v1.3 (build 242)

[Moved from another thread - question answered above]

I’ve just encountered a similar problem with a recently imported album labeled “Mixed Track Formats.” “ALAC 44.1kHz 16bit” appears beneath each track except one, which reads “ALAC 44.1kHz 16bit, MQA 4096000.0kHz.” Like the OP, I used dBpoweramp to rip the album from a CD. However, I can find nothing about the file or in the file tags that would account for the MQA label. Even “View File Info” within Roon shows a normal ALAC 16/44.1 file.

Only Disc 1 of the two disc set is affected. I’ve tried deleting and reimporting the album. Does anyone at support have any thoughts about what might be going on?

Think this is due the latest update from roon. They acknowledged that the code they received to better identify MQA tracks, apparently does this not entirely correct and produces false positives. Roon is working on it. So pretty sure nothing wrong on your side.