No Audio Through Primary Zone

Hi, and thanks in advance for your help. I am a Roon lifetime subscriber, and this is my first time writing with an issue.

I previously used only the Rendu player as my zone/output, and recently purchased and tried to add the Node as another zone/output. Roon recognizes the Node and I have successfully heard output through the Node on the secondary system the Node is hooked up to.

Now, upon returning to my primary system, the Rendu player still shows as a zone and can be selected as the active zone in the lower right corner of the Roon screen, but when doing so, nothing will play in Roon. When selecting a track from my history, the popup box with “Play Now” button comes up, and on pressing the button, the track shows briefly at the bottom of the screen, then changes to “Nothing Playing”.

Going to the “Settings” menu, then the “Audio” sub-menu, all three devices are shown, the iPad, the Node and the Rendu. Under the iPad, which is shown first under “Connected to This Tablet”, it says “Audio will play out the default device”, and in fact I was able to play audio through the iPad speaker, as if it were an output zone/endpoint, when all I want it to function as is a controller. My first thought was somehow I need to reconfigure my “default device” from the iPad to the Rendu player, but I cannot find any way to do this. I’m just lost at this point trying to find out how to get sound/signal to my Rendu player and my primary audio system, which used to be routine.

Just to confirm, did the issue start occurring with the Rendu as soon as you used the Node? Has it ever worked since adding the Node?

Have you tried rebooting your Core machine and the Rendu since experiencing this issue?

Hi, Dylan. Thanks for your message. Today was the first time I had tried to use the Rendu/primary system since adding the Node to the secondary system. Since inputting the issue, I have been able to get sound again through the Rendu by re-booting my DAC, a PS Audio DirectStream. I’m not sure why this worked, as previously when I couldn’t get any sound I had rebooted the DAC, the Rendu and the Core, and exited/re-entered Roon on my iPad, all to no avail. Not sure why, but the latest DAC reboot seems to have solved the issue and it’s working now.

Glad to hear that things are now working as expected! If this issue occurs again please feel free to reach out to us for another look, and I would also make sure that the DAC and Rendu are using the newest firmware versions. Thanks!

Will do. All are running latest firmware; PS Audio DirectStream on Snowmass, Rendu and sonicTransporter core running sonicorbiter OS v2.7

Norris or Dylan, I would appreciate your feedback on this. Was just listening via Roon/Tidal and my Roon screen has just turned into this 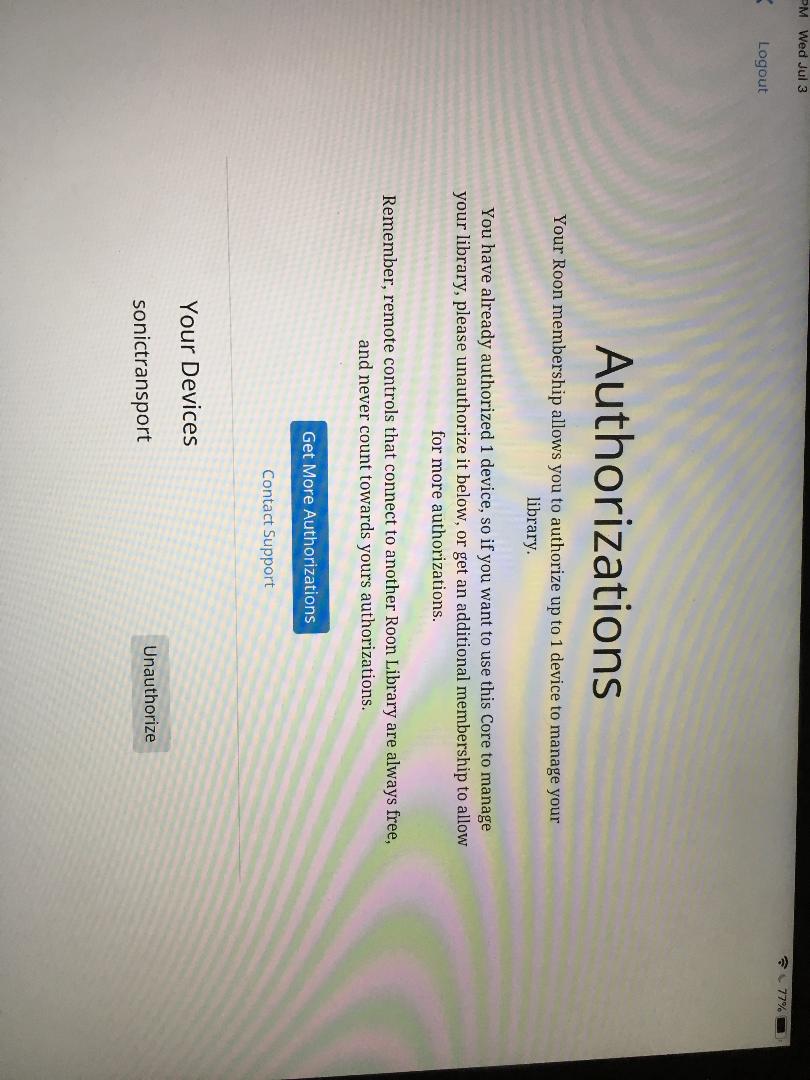 I guess this is telling me Roon thinks I am trying to operate more than one core. I have one core, SGC sonicTransporter i7, on which I am trying to run two Roon endpoints, Rendu (downstairs) and Node (upstairs; secondary system). Can you please advise me how to correct this? It looks like my only choices are to logout or to unauthorize my sonicTransporter as my core, which I obviously don’t want to do as its only job is to function as my Roon core. I have paid for a lifetime Roon subscription. Thanks in advance, guys. Randy

You should try to ‘Unauthorize’. Did you do anything to your Roon database - starting from scratch, restoring from the backup or anything else?

By the way, apologies for overlooking in my last response, and to your question vova, I have done none of those things. I am what I would consider a very unsophisticated Roon user (which you may have inferred from these questions). I have Roon on one core (the sonicTransporter) and I launch it on my iPad and use it to play from my Tidal subscription or my SSD containing my CD library rips, which is connected to the sonicTransporter via USB. That’s it, which makes it all the more confusing to be experiencing these intermittent issues having paid my lifetime subscription fee.