No longer able to play tracks from Qobuz

I’m having trouble playing any tracks from Qobuz.

It’s always been the most reliable service since support was added and has worked entirely fine, though in the last couple weeks all tracks receive an error when trying to play on any speaker or Roon ready device on my system.

Tidal and local tracks continue to work fine, but Qobuz gives a failure message, and eventually a “too many failures, stopping playback” message.

I’ve tried signing out/in of both Qobuz and Roon Core but with no luck. Has support for Qobuz been dropped? 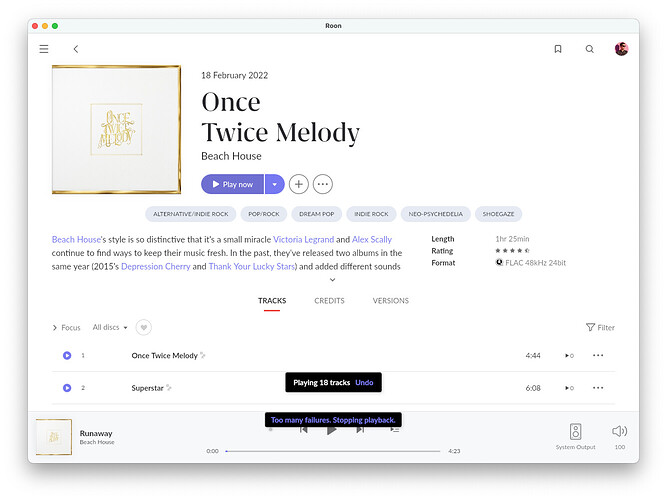 Not sure my Qobuz experience is related to your issue but the symptoms are very similar. I’ve had my account recently wiped by Qobuz. Contacted support and they requested proof of payment which I provided, since then…nothing. That’s well over a week ago. Mistake I made was moving from a monthly payment to an annual payment late last year. I originally signed up with Qobuz using a VPN (not avail in Aus at the time). Everything worked fine until a couple of weeks ago. Anyway through my own research it appears Qobuz is now Geo checking user source IP addresses with the audio stream and if it detects you signed up say for a USA account but are in fact located outside of USA they block the stream. While I’m waiting for Qobuz support to respond to my issue, which I suspect they won’t, I decided to sign up for a one month free trial locally from Aus…and surprise surprise everything works fine. Really p…ed off with Qobuz that they just axed my account part way through an annual subscription with no warning or offer to move my original USA account to Aus. Apart from the financial side of it I’ve also lost some 600+ albums from my library on Roon. It appears the Qobuz preferred strategy is just to cut and ignore. So lesson learnt. Won’t be signing up for an annual subscription again any time soon.