4:05 PM Pacific in the San Francisco Bay Area. No iPad or iPhone App Store update for the remote app. No indication of update for my Roon Rock server.

Hey @Michael_Glish – when you look at Roon in the App Store, you’re not seeing 1.8?

What do you see when you go to Settings > About?

This is what happened. I read that you were supposed to update your remote apps (in my case, iOS) first, then your Core. All day I went to the Apple App Store. Nothing all day. Then I had a lightbulb come over my head: Open the app and see what happens.

I opened my iPad app and there was the update. It also looked at my Roon Rock server and implied that updating within the app would update the server as well. I pressed the App Store graphic and the Roon Rock message changed and said I was now at 1.8. I pressed again and was taken directly to the app update. I pressed “Update” and the iPad app was updated.

I’ve never initiated an app update from within an app like that.

I wish I would have your experience. I’ve been checking the App Store all day. Nothing. I turned to the forum, found this helpful message above, but when I opened my iOS app, this is what I got: 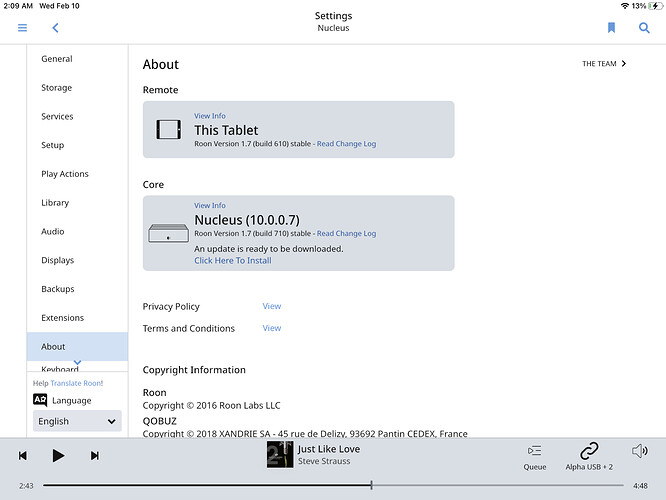 Well I’m not supposed to update without the app, so now what?