I have installed Roon, I see my music collection in it, I have named a Zone for this PC as “workshop,” in Audio Setup I see the Creative XFI WASAPI twice, and Creative ASIO once. Setting any of these to ENABLED and playing a track from my library I see the played time of the track advancing but there is no output from the Creative XFI card.

I also have WINAMP on this PC. I have set the DirectSound output to CREATIVE XFI. Using Winamp I can play any stream or select any file I like, it works fine, I can hear it. Hearing it is the objective here… can’t hear anything from ROON.

How do I get ROON to output audio from my Creative XFI? 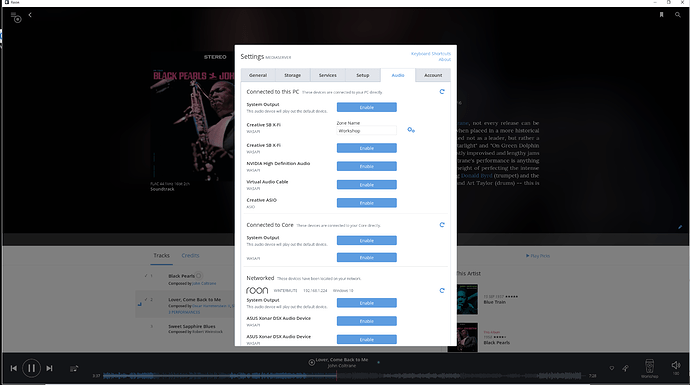 did you try undoing the current Xi fi, workshop, and activating the 2nd one. I had that happen with a xi fi card, and there was an entry for each audio out option, I tried them all until I found the one which worked for the output I was using. Also, notice you are a Neuromancer fan.

I just tried it again, and this time it worked. Have no clue as to why. I chose the same exact settings as I tried the first time. It did not work that time, but did work this time. OK, that’s good, it works, sound comes out, that’s what I want. Ha ha ha, to answer the “why” question- that’s an extra charge.

Yes, that machine is named Wintermute. It was either Wintermute or “GSV No More Mr. Nice Guy”

I shall rename my server “Anticipation of a New Lover’s Arrival, The”.

My work domain I have named The_Slow_Zone. At home, I have The_Beyond.