Weird one this. I’m just going through my library looking at albums not identified by Roon.

One album is Jordi Savall’s Suitte d’un Gout Etranger. The album metadata are correctly tagged for disc number (it’s a two disc set) and for track number for each track. Each disc is in a separate subfolder (CD1 and CD2) in the master folder. Yet the album is not identified.

When I look at the album via the identify album function I see that Roon has mixed up several of the last tracks on disc 2 despite the track numbers in the tags being correct: 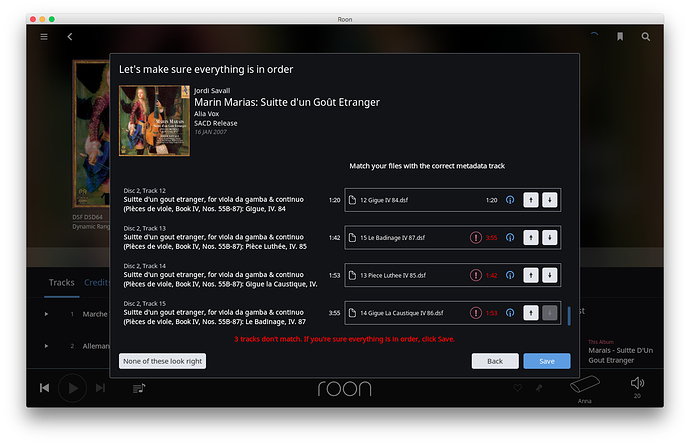 Not only this when I try the edit track grouping function in Roon it shows the track numbers all belonging to a single disc despite the fact that the disc numbers and track numbers in the tags are correct: 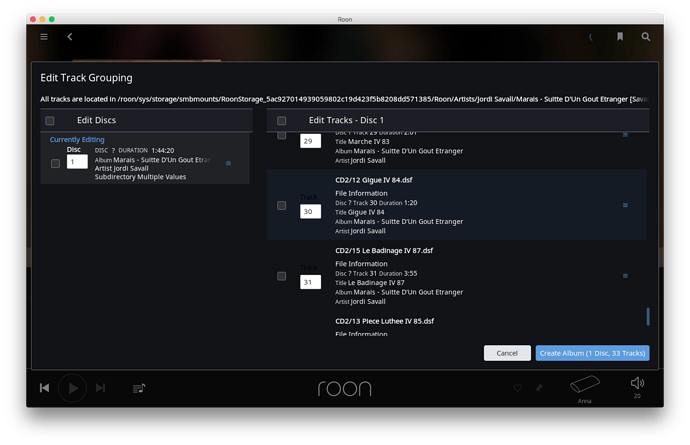 It’s relatively trivial to correct this problem but it still is work that needn’t be done manually. This is the second example I have found, and I wonder how many more in my library are not being identified due to this error in Roon?

Hi @dpstjp. Please can you double-check that your track number file tags are, in fact, correct?

Also, the metadata showed is for the SACD release, which is presumably why it’s trying to force everything into a single disc.

I double checked the track number tags before posting. They were as expected.

The other disc I found this on was the Philip Glass Complete Sony box set. Again the disc and track numbers were all correct but Roon insisted on shoving the Dance 4 from CD17 (I think) into a later disc which had a similar track name.

This is odd as our metadata look pretty good for this album.

Cc: @support for this one.

I agree. The Roon metadata are fine but for some reason Roon was mixing my tracks up despite them being correctly tagged.

Let me know what you need me to do as I’ve retagged and rescanned everything at my end but I can still get the originally tagged files (they are a little large) from my back up before this evening.

I’ve had at least one album which appeared to match Rovi but where in fact one track was in a different place. It caused chaos.

Could this be the case here? Do the titles on AllMusic match precisely those on the back of the cd?

How big is the album? Can you zip up the whole folder and send us a Dropbox link, or similar?

If it’s too big for Dropbox, let me know.

I’ve quarantined the folder on my other NAS so it can’t get overwritten by my back up.

Do you have the same track somwhere else in your library. I found this often caused tracks to be scrambled

I did have the same track elsewhere (in FLAC from a CD rather than DSF from the SACD). I try and put separate discs into a subfolder each as well as tag disknumber to help manage multidisc sets.

I did send the files to @mike who couldn’t replicate the issue so perhaps your thoughts on duplicate tracks might be an clue.